The two little children were now taken home to the house of their uncle; who, for some time, did just as their parents had so lately told him upon their death-bed; and so he used them with great kindness. But when he had kept them about a year, he forgot by degrees to think how their father and mother looked when they gave their children to his care, and how he himself had made a promise to be their father, mother, and uncle, all in one.

After a little more time had passed; the uncle could not help thinking that he wished the little boy and girl would die, for then he should have all their money for himself; and when he had once begun to think this, he went on till he could hardly think of any thing else. At last he said to himself: “It would not be very hard for me to kill them so as for nobody to know anything at all about the matter, and then the money will be mine at once.”

When the cruel uncle had once brought his mind to kill the helpless little creatures, he was not long in finding a way to bring it about. He hired two sturdy ruffians, who had already killed many travellers in a dark thick wood, some way off, for the sake of robbing them of their money. These two wicked creatures now agreed with the uncle, for a large sum of money to do the most cruel deed that ever yet was heard of; and so the uncle began to get every thing ready for them.

He told an artful story to his wife, of what good it would do to the children to put them forward in their learning; and how he had a friend in London who would take great care of them. He then said to the poor little things: “Should not you like, my pretty ones, to see the famous town of London; where you, William, can buy a fine wooden horse to ride upon all day long, and a whip to make him gallop, and a fine sword to wear by your side? And you, Jane, shall have pretty frocks, and pretty dolls, and many other pretty play things; and a nice gilded coach shall be got to take you there.”

The harmless little creatures were put into a fine coach a few days after; and along with them the two cruel wretches, who were soon to pat an end to their merry prattle, and turn their smiles into tears. One of them drove the coach, and the other sat inside between little William and little Jane.

When they had reached the entrance of the dark thick wood, the two ruffians took them out of the coach, telling them they might now walk a little way and gather some flowers; and while the children were skipping about like lambs, the ruffians turned their backs to them, and began to talk about what they had to do. 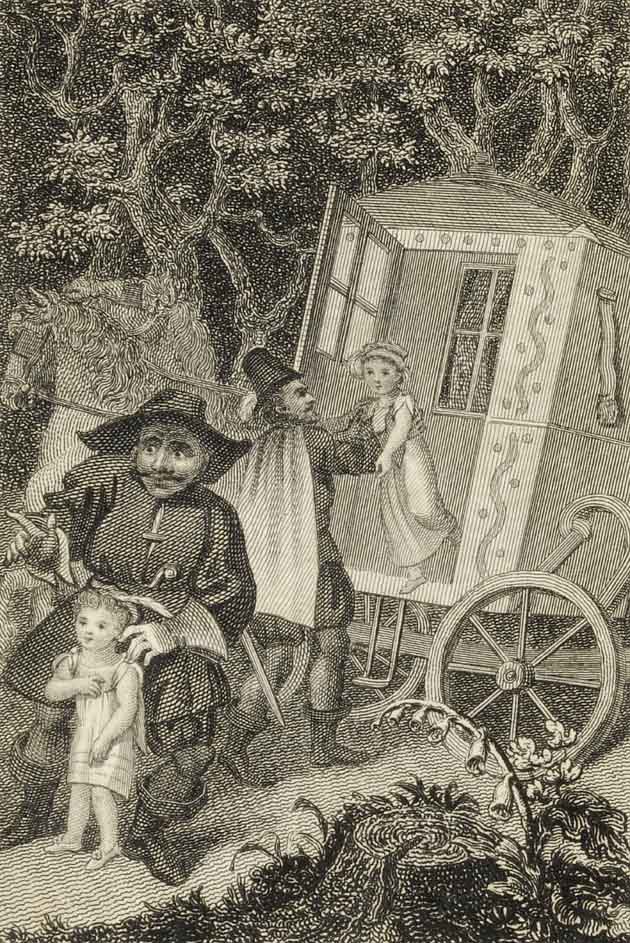 “In good truth,” said the one who had been sitting between the children all the way, “now I have seen their sweet faces, and heard that pretty talk, I have no heart to do the cruel deed: let us fling away the ugly knife, and send the children back to their uncle.” “But indeed I will not,” said the other; what is their pretty talk to us? and who will pay us for being so tender hearted?” “Think of your own children at home,” answered the first. “Yes, but I shall get nothing to take back to them if I turn coward as you would have me to do,” replied the other.

At last the two ruffians fell into such a great passion about killing the poor babes, that the one who wished to spare their lives took out the great knife he had brought to murder them, and stabbed the other to the heart, so that he fell down dead at his feet. 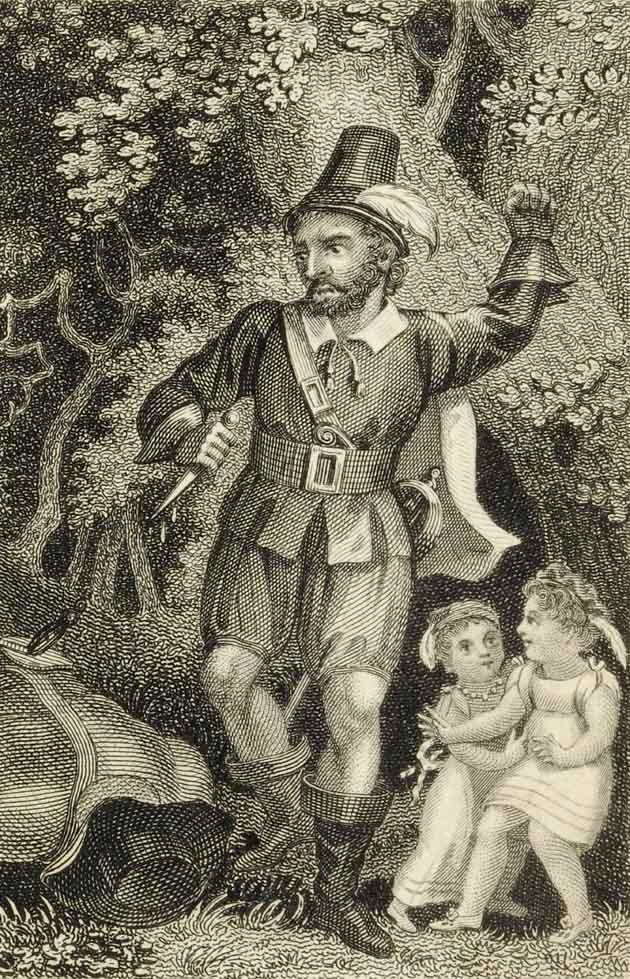 The one who had killed him was now at a loss what to do with the children; for he wanted to get away as fast as he could for fear of being found in the wood. At last he thought the only thing he could do was to leave them in the wood by themselves, and trust them to the kindness of any body that might happen to pass by and find them there.

“Come here, my pretty ones,” said he, “you must take hold of my hands and go a little way along with me.” The poor children took each a hand, and went on; but the tears burst from their eyes, and their little limbs shook with fear all the while.

In this way he led them for about two miles further on in the wood; and then told them to wait there till he came back from the next town, where he would go and get them some food.

From The Children in the Wood: a Tale for the Nursery.London: William Darton, Jun., 1819.

Find stories similar to The Children in the Wood

Then, as Bebeck rounded the crag, he beheld a dark opening, within which he could hear a dreadful snarling and barking going on.

Worthy, ah! your very Worth lies in your Not Asserting it.

Nyankupon was amazed at Spider's cleverness in fulfilling the three conditions. He immediately gave him permission for the future to call all the old tales Anansi tales.