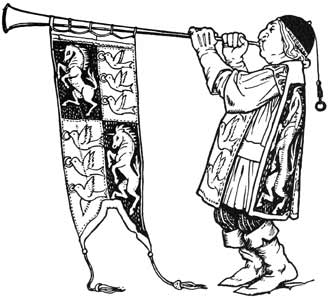 Once upon a time, though it was not in my time or in your time, or in anybody else’s time, there was a great King who had an only son, the Prince and Heir who was about to come of age. So the King sent round a herald who should blow his trumpet at every four corners where two roads met. And when the people came together he would call out, “O yes, O yes, O yes, know ye that His Grace the King will give on Monday sennight”—that meant seven nights or a week after—“a Royal Ball to which all maidens of noble birth are hereby summoned; and be it furthermore known unto you that at this ball his Highness the Prince will select unto himself a lady that shall be his bride and our future Queen. God save the King.”

Now there was among the nobles of the King’s Court one who had married twice, and by the first marriage he had but one daughter, and as she was growing up her father thought that she ought to have some one to look after her. So he married again, a lady with two daughters, and his new wife, instead of caring for his daughter, thought only of her own and favoured them in every way. She would give them beautiful dresses but none to her step-daughter who had only to wear the cast-off clothes of the other two. The noble’s daughter was set to do all the drudgery of the house, to attend the kitchen fire, and had naught to sleep on but the heap of cinders raked out in the scullery; and that is why they called her Cinder-Maid. And no one took pity on her and she would go and weep at her mother’s grave where she had planted a hazel tree, under which she sat.

You can imagine how excited they all were when they heard the King’s proclamation called out by the herald. “What shall we wear, mother; what shall we wear?” cried out the two daughters, and they all began talking about which dress should suit the one and what dress should suit the other, but when the father suggested that Cinder-Maid should also have a dress they all cried out: “What, Cinder-Maid going to the King’s Ball; why, look at her, she would only disgrace us all.” And so her father held his peace.

Now when the night came for the Royal Ball Cinder-Maid had to help the two sisters to dress in their fine dresses and saw them drive off in the carriage with her father and their mother. But she went to her own mother’s grave and sat beneath the hazel tree and wept and cried out:

“Tree o’mine, O tree o’me,
With my tears I’ve watered thee;
Make me a lady fair to see,
Dress me as splendid as can be.”

And with that the little bird on the tree called out to her,

So Cinder-Maid shook the tree and the first nut that fell she took up and opened, and what do you think she saw?—a beautiful silk dress blue as the heavens, all embroidered with stars, and two little lovely shoon made of shining copper. And when she had dressed herself the hazel tree opened and from it came a coach all made of copper with four milk-white horses, with coachman and footmen all complete. And as she drove away the little bird called out to her:

“Be home, be home ere mid-o’night
Or else again you’ll be a fright.”

When Cinder-Maid entered the ball-room she was the loveliest of all the ladies and the Prince, who had been dancing with her step-sisters, would only dance with her. But as it came towards midnight Cinder-Maid remembered what the little bird had told her and slipped away to her carriage. And when the Prince missed her he went to the guards at the Palace door and told them to follow the carriage. But Cinder-Maid when she saw this, called out:

“Mist behind and light before,
Guide me to my father’s door.”

And when the Prince’s soldiers tried to follow her there came such a mist that they couldn’t see their hands before their faces. So they couldn’t find which way Cinder-Maid went.