You can imagine how excited the sisters were when they came home and told Cinder-Maid all about it, how that the beautiful lady had come in a golden coach in a dress like the sea, with golden shoes, and how all had disappeared at midnight except the golden shoe. “Ah, wouldn’t you have liked to have been there?” said they.

Now when the Prince found out that he could not keep his lady-love nor trace where she had gone he spoke to his father and showed him the golden shoe, and told him that he would never marry any one but the maiden who could wear that shoe. So the King, his father, ordered the herald to take round the golden shoe upon a velvet cushion and to go to every four corners where two streets met and sound the trumpet and call out: “O yes, O yes, O yes, be it known unto you all that whatsoever lady of noble birth can fit this shoe upon her foot shall become the bride of his Highness the Prince and our future Queen. God save the King.”

And when the herald came to the house of Cinder-Maid’s father the eldest of her two step-sisters tried on the golden shoe. But it was much too small for her, as it was for every other lady that had tried it up to that time; but she went up into her room and with a sharp knife cut off one of her toes and part of her heel, and then fitted her foot into the shoe, and when she came down she showed it to the herald, who sent a message to the Palace saying that the lady had been found who could wear the golden shoe. 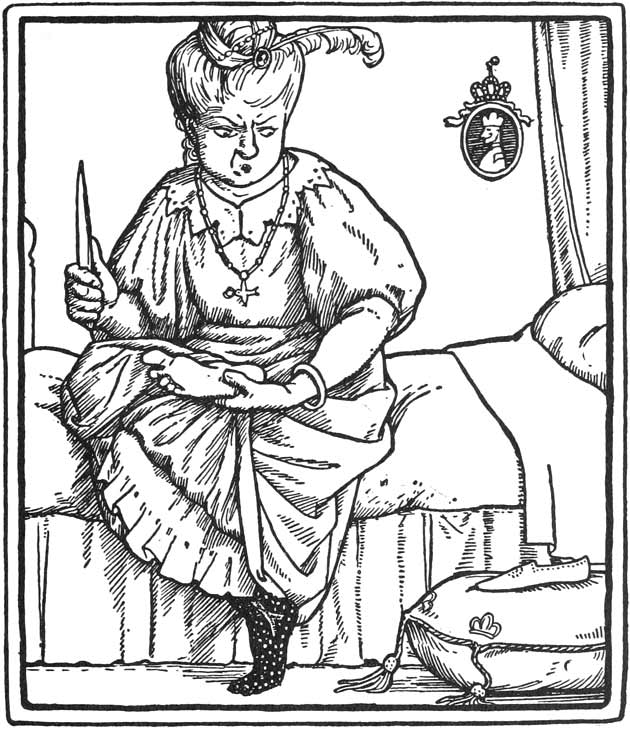 Thereupon the Prince jumped at once upon his horse and rode to the house of Cinder-Maid’s father. But when he saw the step-sister with the golden shoe, “Ah,” he said, “but this is not the lady.” “But,” she said, “you promised to marry the one that could wear the golden shoe.” And the Prince could say nothing, but offered to take her on his horse to his father’s Palace, for in those days ladies used to ride on a pillion at the back of the gentleman riding on horseback. Now as they were riding towards the Palace her foot began to drip with blood, and the little bird from the hazel tree that had followed them called out:

And the Prince looked down and saw the blood streaming from her shoe and then he knew that this was not his true bride, and he rode back to the house of Cinder-Maid’s father; and then the second sister tried her chance; but when she found that her foot wouldn’t fit the shoe she did the same as her sister, but all happened as before. The little bird called out:

And the Prince took her back to her mother’s house, and then he asked, “Have you no other daughter?” and the sisters cried out, “No, sir.” But the father said, “Yes, I have another daughter.” And the sisters cried out, “Cinder-Maid, Cinder-Maid, she could not wear that shoe.” But the Prince said, “As she is of noble birth she has a right to try the shoe.” So the herald went down to the kitchen and found Cinder-Maid; and when she saw her golden shoe she took it from him and put it on her foot, which it fitted exactly; and then she took the other golden shoe from underneath the cinders where she had hidden it and put that on too. Then the herald knew that she was the true bride of his master; and he took her upstairs to where the Prince was; when he saw her face, he knew that she was the lady of his love. So he took her behind him upon his horse; and as they rode to the Palace, the little bird from the hazel tree cried out:

And so they were married and lived happy ever afterwards.

Find stories similar to The Cinder-Maid

The Cat said to his master with a grave and serious air: ‘Do not thus afflict yourself, and you shall see that you have not so poor a portion in me as you think.’

The big, big Tiger came out of the jungle and said, ‘Well, little boy, shall I eat you or all of your sheep?’

Every day at dinner, after the table had been cleared, a trusty servant had to bring in one other dish. But it was covered up, and the servant himself did not know what was in it.