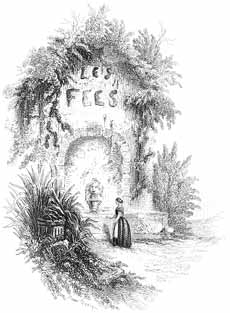 Once upon a time there was a widow who had two daughters. The elder was so much like her, both in looks and character, that whoever saw the daughter saw the mother. They were both so disagreeable and so proud that there was no living with them. The younger, who was the very picture of her father for sweetness of temper and virtue, was withal one of the most beautiful girls ever seen. As people naturally love their own likeness, this mother doted on her elder daughter, and at the same time had a great aversion for the younger. She made her eat in the kitchen and work continually.

Among other things, this unfortunate child had to go twice a day to draw water more than a mile and a half from the house, and bring home a pitcherful of it. One day, as she was at this fountain, there came to her a poor woman, who begged of her to let her drink. 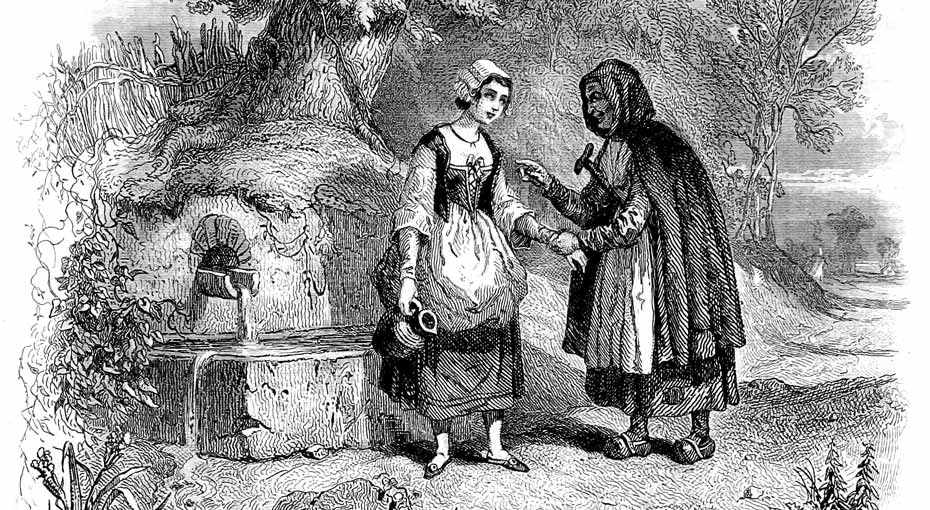 “Oh, yes, with all my heart, Goody,” said this pretty little girl. Rinsing the pitcher at once, she took some of the clearest water from the fountain, and gave it to her, holding up the pitcher all the while, that she might drink the easier.

The good woman having drunk, said to her:

“You are so pretty, so good and courteous, that I cannot help giving you a gift.” For this was a fairy, who had taken the form of a poor country-woman, to see how far the civility and good manners of this pretty girl would go. “I will give you for gift,” continued the Fairy, “that, at every word you speak, there shall come out of your mouth either a flower or a jewel.”

When this pretty girl returned, her mother scolded at her for staying so long at the fountain.

“I beg your pardon, mamma,” said the poor girl, “for not making more haste.” 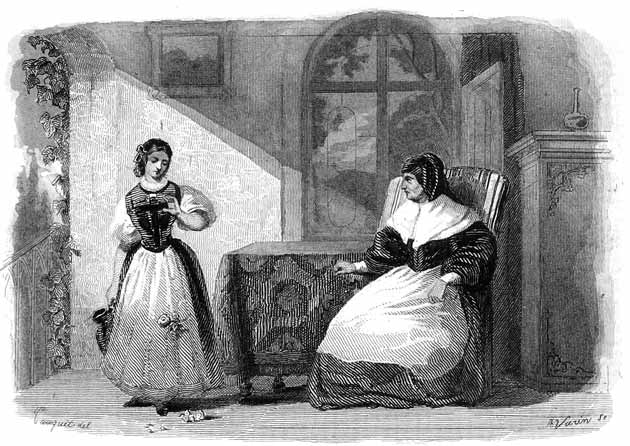 And in speaking these words there came out of her mouth two roses, two pearls, and two large diamonds.

“What is it I see there?” said her mother, quite astonished. “I think pearls and diamonds come out of the girl’s mouth! How happens this, my child?”

This was the first time she had ever called her “my child.”

The girl told her frankly all the matter, not without dropping out great numbers of diamonds.

“Truly,” cried the mother, “I must send my own dear child thither. Fanny, look at what comes out of your sister’s mouth when she speaks. Would you not be glad, my dear, to have the same gift? You have only to go and draw water out of the fountain, and when a poor woman asks you to let her drink, to give it to her very civilly.”

“I should like to see myself going to the fountain to draw water,” said this ill-bred minx.

“I insist you shall go,” said the mother, “and that instantly.”

She went, but grumbled all the way, taking with her the best silver tankard in the house.

She no sooner reached the fountain than she saw coming out of the wood a magnificently dressed lady, who came up to her and asked to drink. This was the same fairy who had appeared to her sister, but she had now taken the air and dress of a princess, to see how far this girl’s rudeness would go.

“Am I come hither,” said the proud, ill-bred girl, “to serve you with water, pray? I suppose this silver tankard was brought purely for your ladyship, was it? However, you may drink out of it, if you have a fancy.”

“You are scarcely polite,” answered the fairy, without anger. “Well, then, since you are so disobliging, I give you for gift that at every word you speak there shall come out of your mouth a snake or a toad.”