So soon as her mother saw her coming, she cried out:

“Well, mother?” answered the unhappy girl, throwing out of her mouth a viper and a toad. 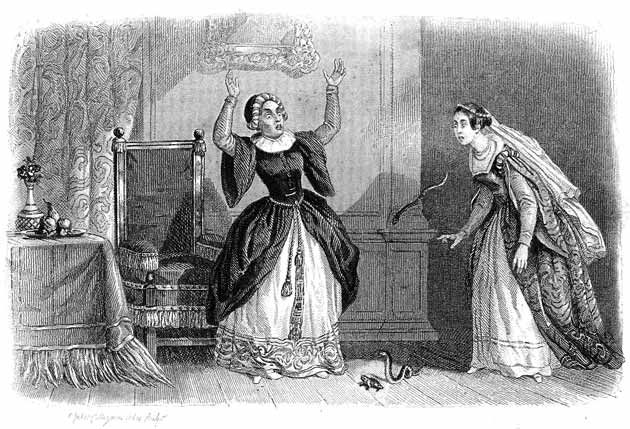 “Oh, mercy!” cried the mother, “what is it I see? It is her sister who has caused all this, but she shall pay for it,” and immediately she ran to beat her. The poor child fled away from her, and went to hide herself in the forest near by.

The King’s son, who was returning from the chase, met her, and seeing her so beautiful, asked her what she did there alone and why she cried.

“Alas! sir, my mother has turned me out of doors.”

The King’s son, who saw five or six pearls and as many diamonds come out of her mouth, desired her to tell him how that happened. She told him the whole story. The King’s son fell in love with her, and, considering that such a gift was worth more than any marriage portion another bride could bring, conducted her to the palace of the King, his father, and there married her.

As for her sister, she made herself so much hated that her own mother turned her out of doors. The miserable girl, after wandering about and finding no one to take her in, went to a corner of the wood, and there died.

Find stories similar to The Fairy

The little doll's eyes would begin to shine like glow-worms, and it would become alive. It would eat a little food, and sip a little drink, and then it would comfort Wassilissa and tell her how to act.

The wizard flew into a rage, and said, ‘Chop her hands off, otherwise I cannot touch her.’ The miller was terrified, and exclaimed, ‘How can I cut off the hands of my own child?’

‘You must take great pains to make my bed well, and shake it up thoroughly, so that the feathers fly about, and then in the world it snows, for I am Mother Hulda.’