There lived an old man with his old wife. They had three daughters. The youngest was such a beauty that she could neither be told of in a tale nor described with a pen. Once the old man was going to town to the fair, and he said: “My dear daughters, say what ye want; I will buy all ye wish at the fair.”

The old man laughed at his youngest daughter. “Oh, little dunce! what dost thou want of a red flower? Great good in it for thee; better I’ll buy thee clothes.” 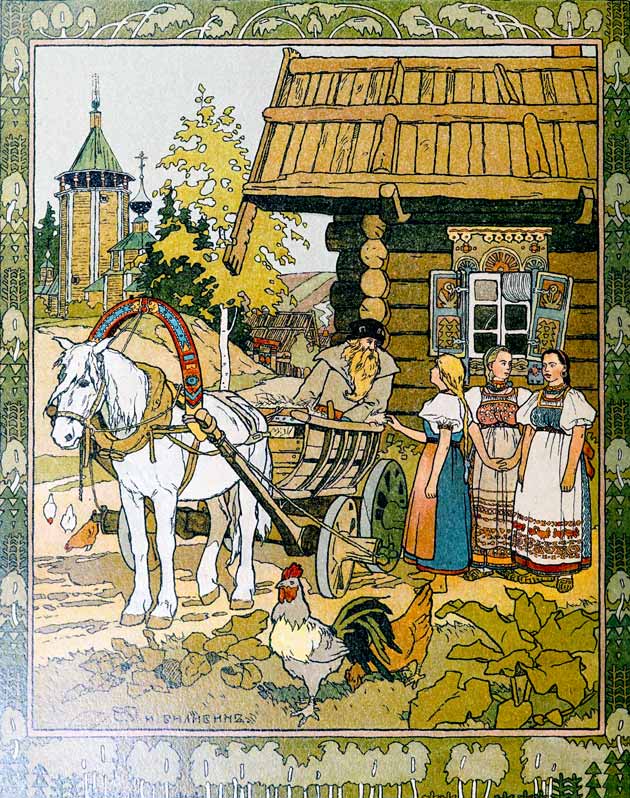 No matter what he said, he could not persuade her. “Buy me a little red flower, nothing but that.” The old man went to the fair, bought the eldest daughter a dress, the second a shawl kerchief; but in the whole town he could not find a red flower. Only as he was coming home did an unknown old man happen in his way. The old man had a red flower in his hand. “Sell me thy flower, old man.”

“It is not for sale, it is reserved. If thy youngest daughter will marry my son, Bright Finist the Falcon, I will give the flower as a gift.”

The father grew thoughtful. Not to take the flower was to grieve his daughter, and to take it was to give her in marriage, God knows to whom! He thought and thought; still he took the flower. “What harm?” said he to himself; “they will come with proposals by and by. If he is not the right man, why, we can refuse.” He came home, gave the eldest daughter her dress, the second her shawl, and to the youngest he gave the flower, saying, “I like not thy flower, my dear daughter; greatly I like it not.” And then he whispered in her ear: “The flower was reserved, and not for sale. I took it from a strange man for the promise to give thee in marriage to his son, Bright Finist the Falcon.”

“Be not troubled, father, he is so good and kind; he flies as a bright falcon in the sky, and when he strikes the damp earth he is a hero of heroes.”

“But dost thou know him?”

“I know him, father. Last Sunday he was at Mass, and looked at me all the time. I talked to him—he loves me, father.”

The old man shook his head, looked at his daughter very sharply, made the sign of the cross on her, and said: “Go to thy room, my dear daughter, it is time to sleep. The morning is wiser than the evening; we will talk this matter over hereafter.”

The daughter shut herself up in her room, put the red flower in water, opened the window, and looked into the blue distance. Wherever he came from, Bright Finist the Falcon of Flowery Feathers wheeled before her, sprang in through the window, struck the floor, and became a young man. The maiden was frightened; but when he spoke it became one knows not how joyous and pleasant at her heart. They talked till dawn, I know not indeed of what; I know only that when day began to break, Bright Finist the Falcon of Flowery Feathers kissed her and said: “Every night as soon as the bright little flower is placed on the window I will fly to thee, my dear. But here is a feather from my wing. Shouldst thou wish for robes, go out on the balcony and wave it on the right side; in a moment all that thy soul desires will appear before thee.” He kissed her once more, turned into a bright falcon, and flew away beyond the dark forest.

The maiden looked after her fated one, closed the window, and lay down to sleep. From that time every night, as soon as she placed the little red flower at the window, the good youth, Bright Finist the Falcon, flew to her.

Well, Sunday came. The elder sisters began to dress for Mass. “But what art thou going to wear? Thou hast nothing new,” said they to the youngest one.

She answered, “Never mind; I can pray even at home.”

From Myths and folk-tales of the Russians, Western Slavs, and Magyars, by Jeremiah Curtin.
Boston: Litle, Brown, and Company, 1903