Out in the forest stood a pretty little Fir Tree. It had a good place; it could have sunlight, air there was in plenty, and all around grew many larger comrades—pines as well as firs. But the little Fir Tree was in such a hurry to grow. It did not care for the warm sun and the fresh air; it took no notice of the peasant children, who went about talking together, when they had come out to look for strawberries and raspberries. Often they came with a whole pot-full, or had strung berries on a straw; then they would sit down by the little Fir Tree and say, “How pretty and small that one is!” and the Tree did not like to hear that at all.

Next year it had grown a great joint, and the following year it was longer still, for in fir trees one can always tell by the number of joints they have how many years they have been growing.

“Oh, if I were only as great a tree as the others!” sighed the little Fir, “then I would spread my branches far around, and look out from my crown into the wide world. The birds would then build nests in my boughs, and when the wind blew I could nod just as grandly as the others yonder.”

It took no pleasure in the sunshine, in the birds, and in the red clouds that went sailing over it morning and evening. 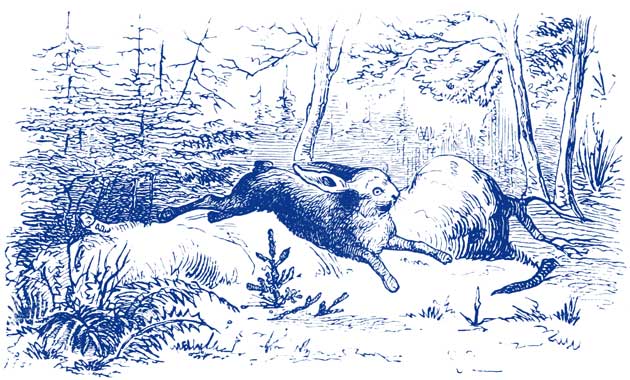 When it was winter, and the snow lay all around, white and sparkling, a hare would often come jumping along, and spring right over the little Fir Tree. Oh! this made it so angry. But two winters went by, and when the third came the little Tree had grown so tall that the hare was obliged to run round it.

“Oh! to grow, to grow, and become old; that’s the only fine thing in the world,” thought the Tree.

In the autumn woodcutters always came and felled a few of the largest trees; that happened every year, and the little Fir Tree, that was now quite well grown, shuddered with fear, for the great stately trees fell to the ground with a crash, and their branches were cut off, so that the trees looked quite naked, long, and slender—they could hardly be recognized. But then they were laid upon wagons, and horses dragged them away out of the wood. Where were they going? What destiny awaited them?

In the spring, when the Swallows and the Stork came, the Tree asked them, “Do you know where they were taken? Did you not meet them?”

The Swallows knew nothing about it, but the Stork looked thoughtful, nodded his head, and said, “Yes, I think so. I met many new ships when I flew out of Egypt; on the ships were stately masts; I fancy that these were the trees. They smelt like fir. I can assure you they’re stately—very stately.”

“Oh that I were only big enough to go over the sea! What kind of thing is this sea, and how does it look?”

“It would take too long to explain all that,” said the Stork, and he went away.

“Rejoice in thy youth,” said the Sunbeams; “rejoice in thy fresh growth, and in the young life that is within thee.”

And the wind kissed the Tree, and the dew wept tears upon it; but the Fir Tree did not understand that.

When Christmas-time approached, quite young trees were felled, sometimes trees which were neither so old nor so large as this Fir Tree, that never rested but always wanted to go away. These young trees, which were just the most beautiful, kept all their branches; they were put upon wagons, and horses dragged them away out of the wood.