The First Summer in the New World

During the summer the White Rabbit was like a father to all the other animals. He was the only one who could remember what their life had been like before the great flood came. All they knew was that they had found themselves in the big canoe. The waters were about them, and the White Rabbit sat in the midst of them, the master of them all.

They could remember everything that happened from that moment. The Badger knew that his legs were mud-colored because he had jumped from the canoe into some mud at the edge of the land. The Turkey knew that his dark feathers had colored gleams here and there, because the whale had splashed a few drops of water over him. But whenever any of the animals wanted to know what had happened before the great flood, they came to Manabozho, who remembered everything, and asked questions. 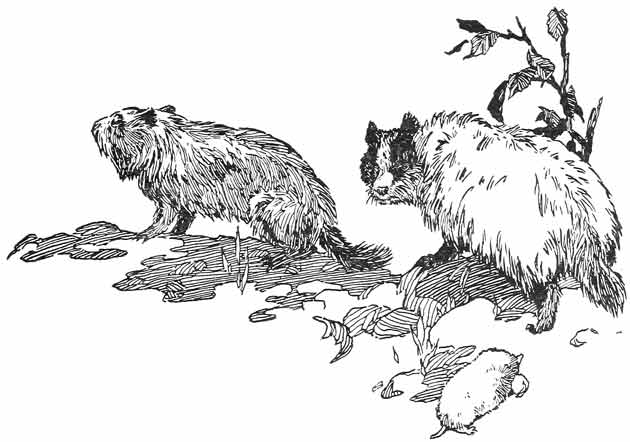 One day the Ground Hog and the Badger and the Mole came to the Great White Rabbit.

“Manabozho,” they said, “we keep making burrows for ourselves in the ground, and hiding there away from the Sun. Why is this?”

“It is your nature,” he replied. “I will tell you how it happened. Once we all lived underground in a great cavern, where it was dark and cold.”

The Cat, who was always basking in the sun, shivered when she heard this.

“But after a time,” continued Manabozho, “cracks appeared in the rocks which roofed the cavern. Through these, gleams of light came. The animals all wondered what it was. They said they would like to find out. They were tired of eating sand, and of chewing at the roots of a big vine, which stretched up into the roof of the cavern.

“They kept asking each other if there was any way of getting out of the cavern. At last the chief Rattlesnake said that he had been told that there was a world above the cavern. It was very beautiful, and full of good food.

“What happened next?” asked the animals, as Manabozho paused.

“All the animals went to the roots of the big vine, and began to climb up, up toward the gleams of light. It was a very stout old vine, or it would never have borne all their weight. Up and up went the figures. They all looked dark and shadowy. Even the yellow fur of the Fox seemed as brown as the fur of the Bear.

“But by and by those climbing below the Fox saw a streak of gold upon his back. It was a great ray of sunlight across him. Then every one knew that there must be a hole at the top of the cavern. And so there was.

“They all went through it, and found themselves in a beautiful world full of sunlight. The air was warm and sweet. The trees were green, and the grass was green, and full of scarlet and yellow and white flowers. The animals were all delighted.

“But,” finished Manabozho, speaking particularly to the Ground Hog and the Badger and the Mole, “you three had preferred the cavern; so you are allowed to go underground whenever you want to. The Tortoise and the Rattlesnake hide away for winter.”

The animals were very well pleased with the story. The Cat, however, could hardly believe that she had ever been content to stay underground.

“The Sun is so delightful, Manabozho,” she said, purring contentedly. “I should not like to live without it.”

“And yet you did live for a long time without it,” said the Rabbit. “The animals were wicked, and that was why the flood was sent. When the water came, the Sun went out.”

The animals all moved uneasily. They remembered very well the dreary days in the canoe before Manabozho made the land.

“Tell us about the Sun, Manabozho,” said the Cat. “Why doesn’t it shine at night as well as in the daytime?”

“That would be doing too much work,” said Manabozho. “The Sun is a powerful spirit, and the Moon is another spirit. For a long time they were strangers to each other. Then they decided to marry and to work together to help the world. They agreed that the Sun should walk by day, and the Moon by night.”

“Yes,” said the Cat, “but the Moon does not always walk at night. And sometimes when she does only part of her shows.”

“That is easily explained,” said Manabozho. “She and the Sun have a little boy. But he is not bright as they are; he is very black. The Moon often carries him in her arms, and when she does, his dark body covers up her bright body.”

“What are the little spots we see on her, Manabozho?” asked the Mapgie, who was full of curiosity.

“Those are her cap,” said the White Rabbit. “She likes to wear a cap to add to her dignity.” 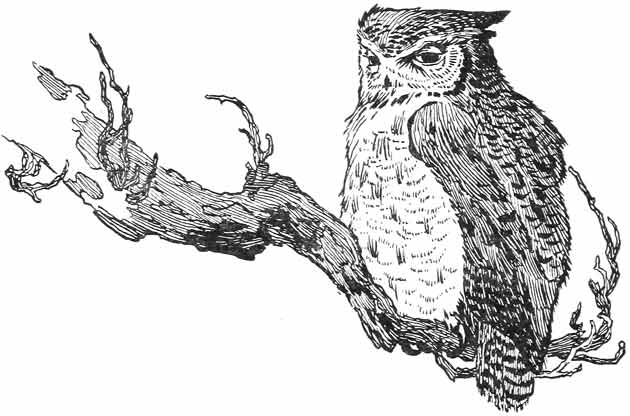 “I like the stars better,” said the Owl. “When the rest of you are asleep, I am awake in the tree, and I look up at them. Sometimes I think they are the beautiful eyes of owls in heaven. And again I think that they are flowers that are leaning down their heads trying to kiss the flowers in the grass.”

“That is a very pretty thought for you to have, brother Owl,” said Manabozho approvingly.

At this all the animals laughed. The Fox was very proud of his tail. It was indeed handsome, but not so beautiful as the tail of a comet.

“What else is in the sky?” asked the Magpie.

“The Thunder Bird,” said Manabozho. “But let’s not talk of him. We shall see him and hear him soon enough. Let us enjoy the summer days while we can.”

And so the summer days passed happily. The birds built nests; the squirrels worked at getting food for winter. But the Beaver did the best work of all.

The Beaver had short, strong legs with which he swam; and a smooth, thick, flat tail, which he used as a kind of rudder. Two great teeth projected from his mouth. He used these like a saw to cut down trees.

In making his house, he built the walls of logs, putting the thickest ones at the bottom. He plastered the spaces between the logs with mud and sticks. The roof he made round. He divided the house into several stories; the bottom story had a little door. One of the stories he used as a place for food.

Manabozho praised the Beaver for his neat work, and told all the other animals to profit by his example. And thus the summer passed, all the animals living happily together. 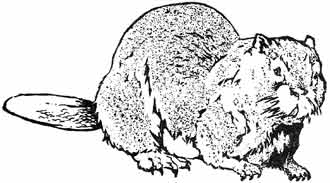 Find stories similar to The First Summer in the New World

The Little Birds Who Lived in a Cave

A tiny bird entered the cave and flew straight to a little bird who was only a hen. ‘You,’ said he, ‘shall kill the blackbird.’

The uncle could not help thinking that he wished the little boy and girl would die, for then he should have all their money for himself.

The bear came every evening at the same time, laid himself down by the hearth, and let the children amuse themselves with him as much as they liked.