The First Travels of Paupukewis

While Manabozho was punishing the wicked animals, something else wicked was at work in his world. This was the tricky-spirit Paupukewis.

Like Manabozho, he could change into any form he pleased. He did much damage. But Manabozho was so busy that he did not have time to punish Paupukewis until many weeks had passed. So the spirit became bolder and bolder.

One day Paupukewis decided to go traveling. As he was choosing his way, he saw old Gray Wolf and his six sons trotting along the shores of Lake Michigan. Paupukewis hailed them.

“I want to go with you,” he said. Gray Wolf was not very well pleased to meet him. He knew the trickiness of Paupukewis. He was not afraid of him, because he was a magician; but he disliked unpleasant company. He waited, however, until Paupukewis came up.

“Where are you going, Gray Wolf?” asked Paupukewis.

“We are going to the place where we can get the most game,” answered Gray Wolf.

“Ah, hunting is just what I want to do,” said Paupukewis. “Will you change me into a wolf?”

This the Gray Wolf did.

“Oh,” Paupukewis said, “I am only the same size as you are. Make me a little larger.”

“Oh, do make my tail a little longer and more bushy,” he begged.

The Gray Wolf did so, and Paupukewis was satisfied. Then all eight of them began running along a ravine. After a while they fell in with the tracks of a moose. The sons of the Gray Wolf at once began to hurry. Their father and Paupukewis followed more slowly. 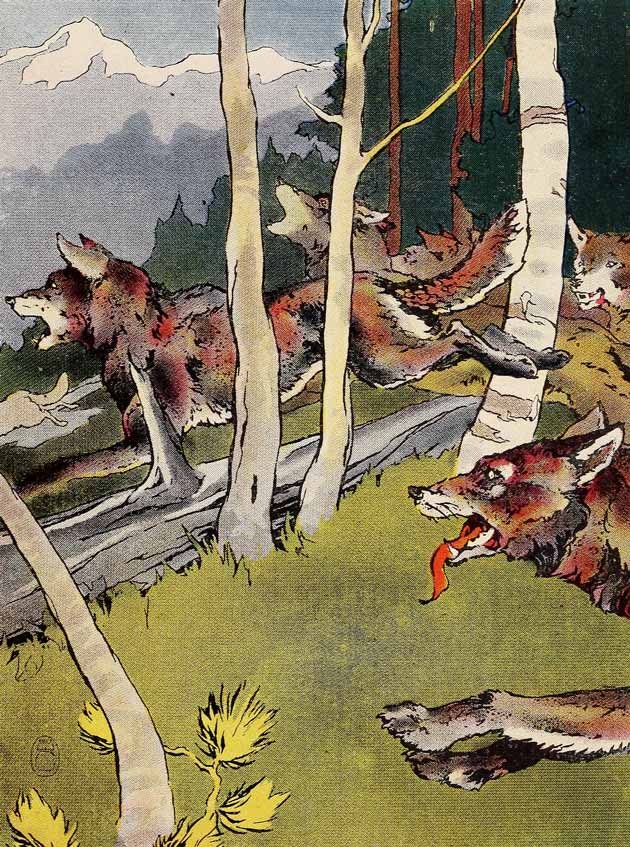 Paupukewis and the wolves fell in with the tracks of a moose.

“Paupukewis,” said the Gray Wolf, “which of my sons do you think is the fastest? Can you tell by the leaps they take?”

“What a silly question,” he replied. “The one that takes the longest jumps is the fastest, of course.”

“You are mistaken,” said Gray Wolf. “The son you speak of makes a good start, but he will be the first to tire out. He is not saving his strength. Some of those behind him will reach the game first. Do not make hasty judgments, Paupukewis.”

Paupukewis muttered. He did not want any good advice. The Gray Wolf took no notice of his rudeness, and they trotted on silently.

After a time they reached the sons, who had game placed ready for them.

“We have eaten ours, father,” they said, “so we shall go on and find more game to take home.”

“Go, then,” said Gray Wolf; and the six trotted off.

The Gray Wolf set a piece of game before Paupukewis. Just as he was about to eat it, the Gray Wolf changed it into a dog-skin.

“It is not a dog-skin. It is a string of pearls,” said Gray Wolf. 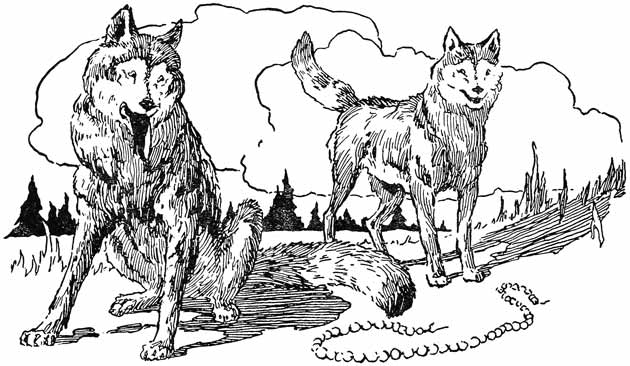 Paupukewis looked down, and sure enough, at his feet was a string of pearls.

The Wolf changed the game into one form after another. Paupukewis began to think he would never get anything to eat. He said this, and then the Gray Wolf remarked: “Since you think you are very clever, and since you scorn my good advice, why do you not prove your worth? Why do you not find some food for yourself?”

“I can hunt as well as your six children,” he shouted.

Then he jumped up and ran after the young wolves. The Gray Wolf smiled wisely. He knew that those who boast a great deal often really do very little.

Paupukewis could not find any game. He caught up to the brothers and saw them picking moose bones. The young wolves were kind, and set food before him. But at that moment up came the Gray Wolf. He enchanted the food. It looked like nothing but a white thigh bone.

Paupukewis was amazed. His pride all left him. The Gray Wolf watched him for a time in silence. Then he said: “Come here, Paupukewis.”

Paupukewis obeyed, and then the Gray Wolf disenchanted the food.

“At last it is real game,” cried Paupukewis, and he hastily began to eat it.

Then the Gray Wolf said: “Paupukewis, try to remember that it is not a long tail which makes a good hunter.”

Paupukewis felt a little bit ashamed. But he was such a flippant character that a reproof did not have much effect on him. He soon gobbled up his food and did not even thank the old Wolf.