There was a cunning but over-reaching old Fox, who, having fortified himself within certain Banks for the plucking and eating of unsuspecting Geese, was, nevertheless, unearthed, and pursued by the County Hounds. Being caught by a trap in his flight, he was glad to compound for his neck by leaving his magnificent tail behind him. 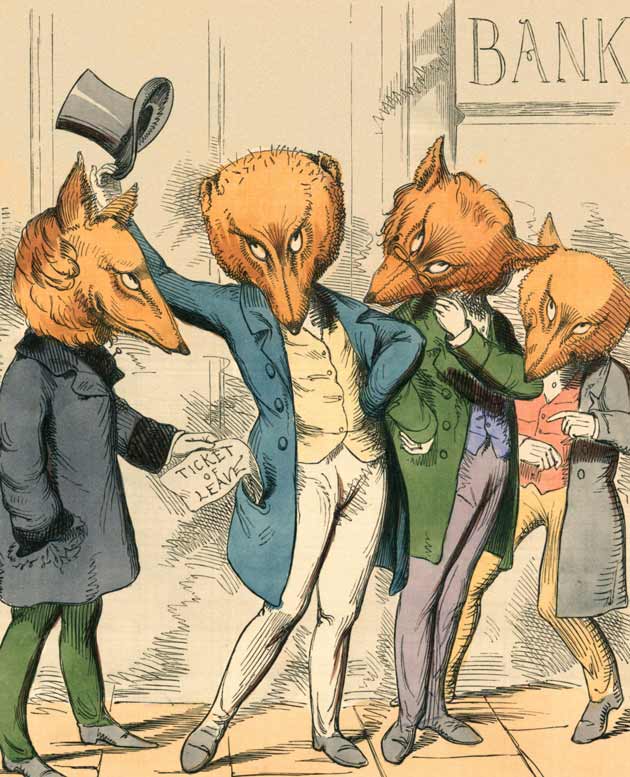 It was so uncouth a sight for a Fox to appear without this distinguishing ornament of his race, that the very thought of it made him weary of his life. But however, for the better countenance of the scandal, he called the Foxes together, when he made a learned discourse upon the trouble, the uselessness, and the indecency of Foxes wearing long, draggling, bushy tails.

He had no sooner finished his harangue, than up rises a cunning old Fox, who desired to be informed whether the worthy Fox that had moved against the wearing of tails gave his advice for the advantage of those that possessed such natural appendages, or to palliate the deformity and disgrace of those that had none.

A thief who has had his ears cropped in the pillory, should not be suffered to set the fashion in periwigs.

From The Fables of Æsop and Others, Translated into Human Nature, by Charles H. Bennett.
London: W. Kent and Company, 1857.