In the olden time, when wishing was having, there lived a King, whose daughters were all beautiful; but the youngest was so exceedingly beautiful that the Sun himself, although he saw her very often, was enchanted every time she came out into the sunshine.

Near the castle of this King was a large and gloomy forest, and in the midst stood an old lime-tree, beneath whose branches splashed a little fountain; so, whenever it was very hot, the King’s youngest daughter ran off into this wood, and sat down by the side of this fountain; and, when she felt dull, would often divert herself by throwing a golden ball up in the air and catching it. And this was her favourite amusement.

Now, one day it happened, that this golden ball, when the King’s daughter threw it into the air, did not fall down into her hand, but on the grass; and then it rolled past her into the fountain. The King’s daughter followed the ball with her eyes, but it disappeared beneath the water, which was so deep that no one could see to the bottom. Then she began to lament, and to cry louder and louder; and, as she cried, a voice called out, “Why weepest thou, O King’s daughter? thy tears would melt even a stone to pity.” And she looked around to the spot whence the voice came, and saw a Frog stretching his thick ugly head out of the water. “Ah! you old water-paddler,” said she, “was it you that spoke? I am weeping for my golden ball, which has slipped away from me into the water.” 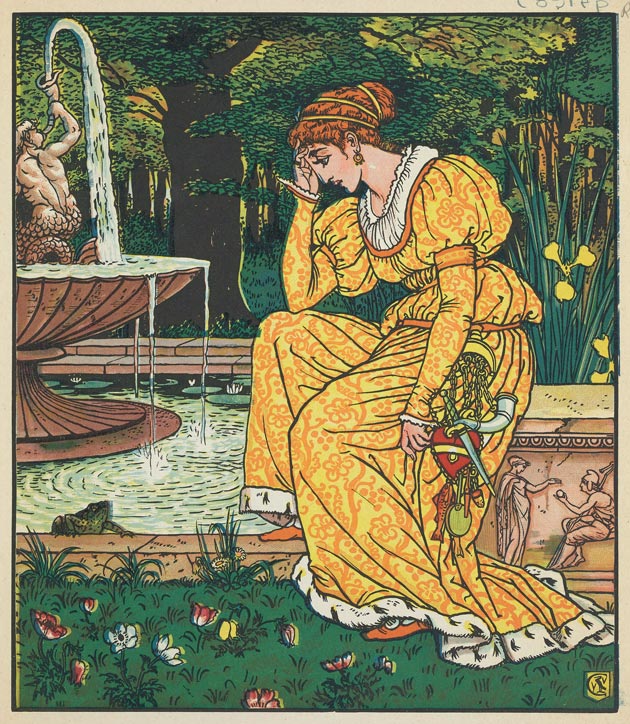 “Be quiet, and do not cry,” answered the Frog; “I can give thee good advice. But what wilt thou give me if I fetch thy plaything up again?”

“What will you have, dear Frog?” said she. “My dresses, my pearls and jewels, or the golden crown which I wear?”

The Frog answered, “Dresses, or jewels, or golden crowns, are not for me; but if thou wilt love me, and let me be thy companion and playfellow, and sit at thy table, and eat from thy little golden plate, and drink out of thy cup, and sleep in thy little bed,—if thou wilt promise me all these, then will I dive down and fetch up thy golden ball.”

“Oh, I will promise you all,” said she, “if you will only get me my ball.” But she thought to herself, “What is the silly Frog chattering about? Let him remain in the water with his equals; he cannot mix in society.” But the Frog, as soon as he had received her promise, drew his head under the water and dived down. Presently he swam up again with the ball in his mouth, and threw it on the grass. The King’s daughter was full of joy when she again saw her beautiful plaything; and, taking it up, she ran off immediately. “Stop! stop!” cried the Frog; “take me with thee. I cannot run as thou canst.” But all his croaking was useless; although it was loud enough, the King’s daughter did not hear it, but, hastening home, soon forgot the poor Frog, who was obliged to leap back into the fountain. 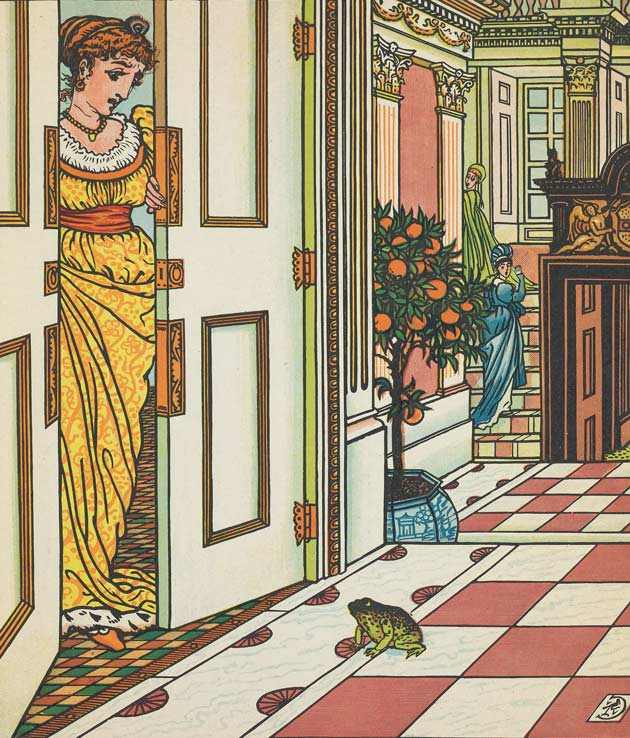 The next day, when the King’s daughter was sitting at table with her father and all his courtiers, and was eating from her own little golden plate, something was heard coming up the marble stairs, splish-splash, splish-splash; and when it arrived at the top, it knocked at the door, and a voice said, “Open the door, thou youngest daughter of the King!” So she rose and went to see who it was that called her; but when she opened the door and caught sight of the Frog, she shut it again with great vehemence, and sat down at the table, looking very pale. But the King perceived that her heart was beating violently, and asked her whether it were a giant who had come to fetch her away who stood at the door. “Oh, no!” answered she; “it is no giant, but an ugly Frog.”

“What does the Frog want with you?” said the King.

“Oh, dear father, when I was sitting yesterday playing by the fountain, my golden ball fell into the water, and this Frog fetched it up again because I cried so much: but first, I must tell you, he pressed me so much, that I promised him he should be my companion. I never thought that he could come out of the water, but somehow he has jumped out, and now he wants to come in here.”

At that moment there was another knock, and a voice said,—

Then the King said, “What you have promised, that you must perform; go and let him in.” So the King’s daughter went and opened the door, and the Frog hopped in after her right up to her chair: and as soon as she was seated, the Frog said, “Take me up;” but she hesitated so long that at last the King ordered her to obey. And as soon as the Frog sat on the chair, he jumped on to the table, and said, “Now push thy plate near me, that we may eat together.” And she did so, but as everyone saw, very unwillingly. The Frog seemed to relish his dinner much, but every bit that the King’s daughter ate nearly choked her, till at last the Frog said, “I have satisfied my hunger and feel very tired; wilt thou carry me upstairs now into thy chamber, and make thy bed ready that we may sleep together?” At this speech the King’s daughter began to cry, for she was afraid of the cold Frog, and dared not touch him; and besides, he actually wanted to sleep in her own beautiful, clean bed. 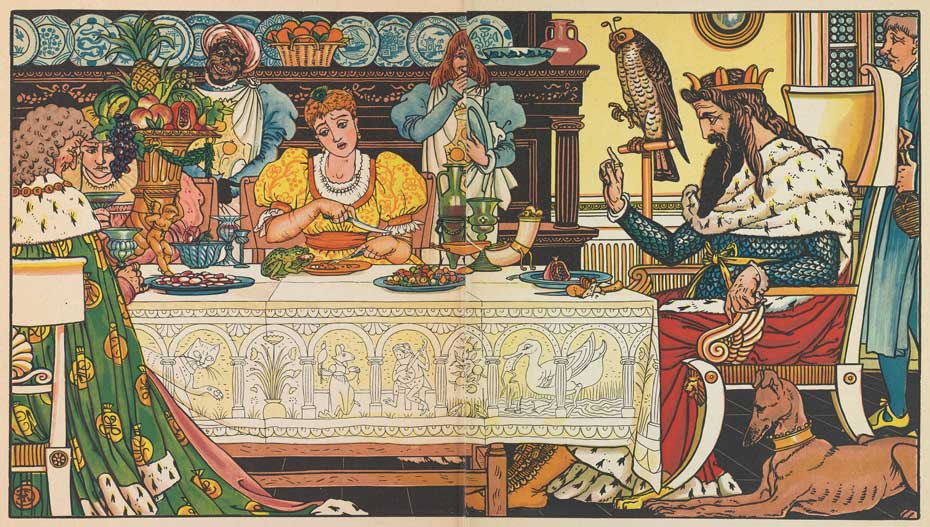 But her tears only made the King very angry, and he said, “He who helped you in the time of your trouble, must not now be despised!” So she took the Frog up with two fingers, and put him in a corner of her chamber. But as she lay in her bed, he crept up to it, and said, “I am so very tired that I shall sleep well; do take me up or I will tell thy father.” This speech put the King’s daughter in a terrible passion, and catching the Frog up, she threw him with all her strength against the wall, saying, “Now, will you be quiet, you ugly Frog ?” 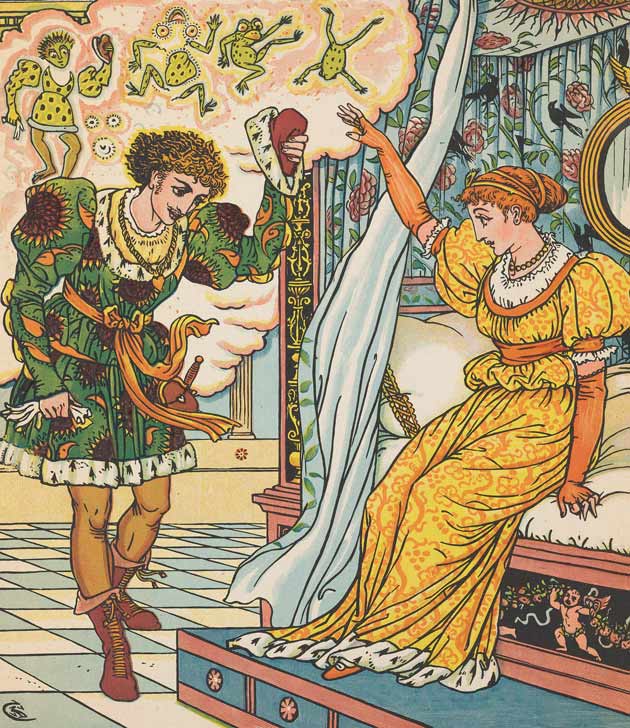 But as he fell he was changed from a frog into a handsome Prince with beautiful eyes, who, after a little while became, with her father’s consent, her dear companion and betrothed. Then he told her how he had been transformed by an evil witch, and that no one but herself could have had the power to take him out of the fountain; and that on the morrow they would go together into his own kingdom.

The next morning, as soon as the sun rose, a carriage drawn by eight white horses, with ostrich feathers on their heads, and golden bridles, drove up to the door of the palace, and behind the carriage stood the trusty Henry, the servant of the young Prince. When his master was changed into a frog, trusty Henry had grieved so much that he had bound three iron bands round his heart, for fear it should break with grief and sorrow. But now that the carriage was ready to carry the young Prince to his own country, the faithful Henry helped in the bride and bridegroom, and placed himself in the seat behind, full of joy at his master’s release. They had not proceeded far when the Prince heard a crack as if something had broken behind the carriage; so he put his head out of the window and asked Henry what was broken, and Henry answered, “It was not the carriage, my master, but a band which I bound round my heart when it was in such grief because you were changed into a frog.” 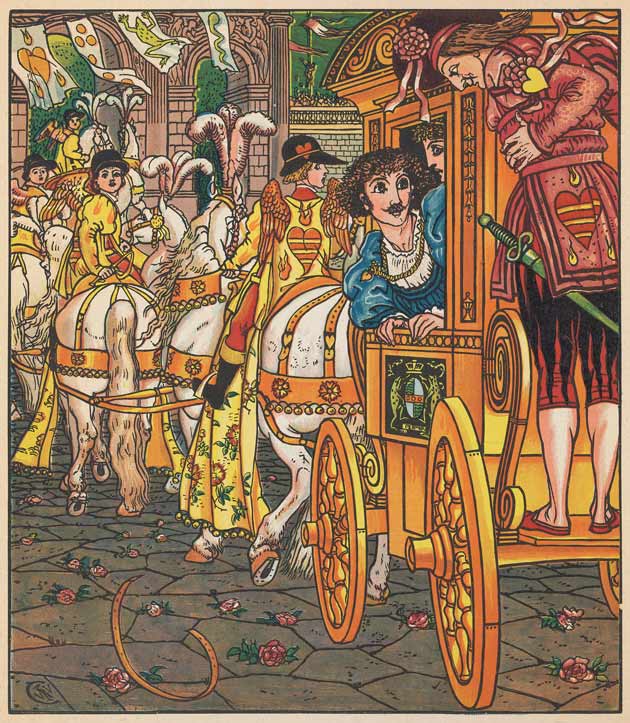 Twice afterwards on the journey there was the same noise, and each time the Prince thought that it was some part of the carriage that had given way; but it was only the breaking of the bands which bound the heart of the trusty Henry, who was thenceforward free and happy.

From The Frog Prince, by Walter Crane.London, New York: George Routledge and Sons, 1874.