Long ago, when wishes often came true, there lived a King whose daughters were all handsome, but the youngest was so beautiful that the sun himself, who has seen everything, was bemused every time he shone over her because of her beauty. Near the royal castle there was a great dark wood, and in the wood under an old linden tree was a well; and when the day was hot, the King’s daughter used to go forth into the wood and sit by the brink of the cool well, and if the time seemed long, she would take out a golden ball, and throw it up and catch it again, and this was her favorite pastime.

Now it happened one day that the golden ball, instead of falling back into the maiden’s little hand which had sent it aloft, dropped to the ground near the edge of the well and rolled in. The King’s daughter followed it with her eyes as it sank, but the well was deep, so deep that the bottom could not be seen. Then she began to weep, and she wept and wept as if she could never be comforted.

And in the midst of her weeping she heard a voice saying to her, “What ails you, King’s daughter? Your tears would melt a heart of stone.”

And when she looked to see where the voice came from, there was nothing but a frog stretching his thick ugly head out of the water. “Oh, is it you, old waddler?” said she; “I weep because my golden ball has fallen into the well.”

“Never mind, do not weep,” answered the frog; “I can help you; but what will you give me if I fetch up your ball again?”

“Whatever you like, dear frog,” said she; “any of my clothes, my pearls and jewels, or even the golden crown that I wear.”

“Your clothes, your pearls and jewels, and your golden crown are not for me,” answered the frog; “but if you would love me, and have me for your companion and play-fellow, and let me sit by you at table, and eat from your plate, and drink from your cup, and sleep in your little bed—if you would promise all this, then would I dive below the water and fetch you your golden ball again.”

“Oh yes,” she answered; “I will promise it all, whatever you want; if you will only get me my ball again.” But she thought to herself, “What nonsense he talks! as if he could do anything but sit in the water and croak with the other frogs, or could possibly be any one’s companion.”

But the frog, as soon as he heard her promise, drew his head under the water and sank down out of sight, but after a while he came to the surface again with the ball in his mouth, and he threw it on the grass. 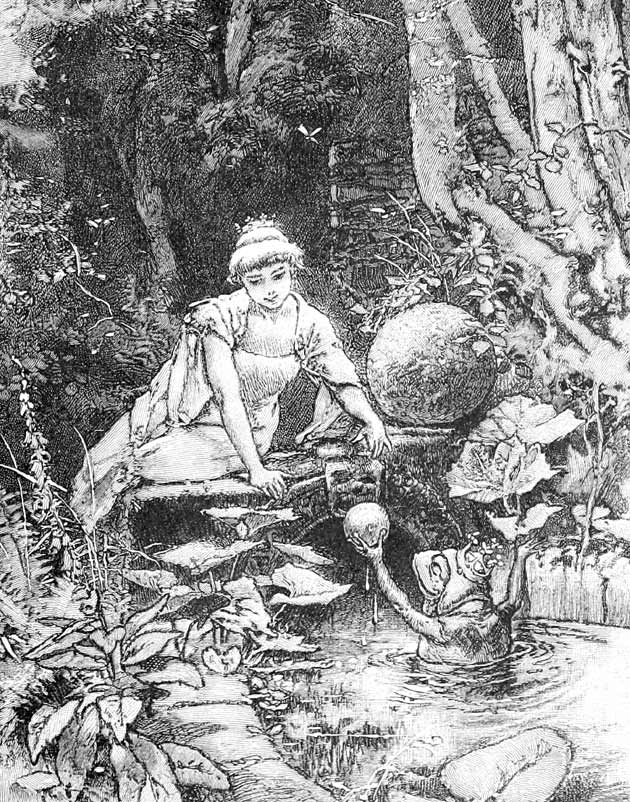 The King’s daughter was overjoyed to see her pretty plaything again, and she caught it up and ran off with it.

But it was of no use, for croak, croak after her as he might, she would not listen to him, but made haste home, and very soon forgot all about the poor frog, who had to betake himself to his well again.

The next day, when the King’s daughter was sitting at table with the King and all the court, and eating from her golden plate, there came something pitter-patter up the marble stairs, and then there came a knocking at the door, and a voice crying, “Youngest King’s daughter, let me in!”

And she got up and ran to see who it could be, but when she opened the door, there was the frog sitting outside. Then she shut the door hastily and went back to her seat, feeling very uneasy.

The King noticed how quickly her heart was beating, and said, “My child, what are you afraid of? Is there a giant standing at the door ready to carry you away?” “Oh no,” answered she; “no giant, but a horrid frog.” “And what does the frog want?” asked the King.