“O dear father,” answered she, “when I was sitting by the well yesterday, and playing with my golden ball, it fell into the water, and while I was crying for the loss of it, the frog came and got it again for me on condition I would let him be my companion, but I never thought that he could leave the water and come after me; but now there he is outside the door, and he wants to come in to me.”

And then they all heard him knocking the second time and crying,

“That which thou hast promised must thou perform,” said the King; “so go now and let him in.”

So she went and opened the door, and the frog hopped in, following at her heels, till she reached her chair. Then he stopped and cried, “Lift me up to sit by you.”

But she delayed doing so until the King ordered her. When once the frog was on the chair, he wanted to get on the table, and there he sat and said, “Now push your golden plate a little nearer, so that we may eat together.”

And so she did, but everybody might see how unwilling she was, and the frog feasted heartily, but every morsel seemed to stick in her throat.

“I have had enough now,” said the frog at last, “and as I am tired, you must carry me to your room, and make ready your silken bed, and we will lie down and go to sleep.”

Then the King’s daughter began to weep, and was afraid of the cold frog, that nothing would satisfy him but he must sleep in her pretty clean bed. Now the King grew angry with her, saying, “That which thou hast promised in thy time of necessity, must thou now perform.”

So she picked up the frog with her finger and thumb, carried him upstairs and put him in a corner, and when she had lain down to sleep, he came creeping up, saying, “I am tired and want sleep as much as you; take me up, or I will tell your father.”

Then she felt beside herself with rage, and picking him up, she threw him with all her strength against the wall, crying, “Now will you be quiet, you horrid frog!”

But as he fell, he ceased to be a frog, and became all at once a Prince with beautiful kind eyes. And it came to pass that, with her father’s consent, they became bride and bridegroom. And he told her how a wicked witch had bound him by her spells, and how no one but she alone could have released him, and that they two would go together to his father’s kingdom. And there came to the door a carriage drawn by eight white horses, with white plumes on their heads, and with golden harness, and behind the carriage was standing faithful Henry, the servant of the young Prince. 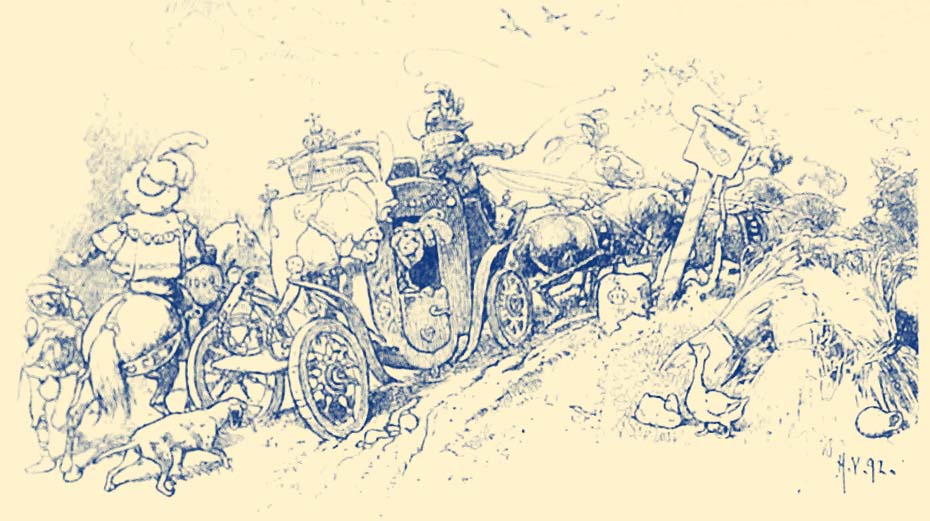 Now, faithful Henry had suffered such care and pain when his master was turned into a frog, that he had been obliged to wear three iron bands over his heart, to keep it from breaking with trouble and anxiety. When the carriage started to take the Prince to his kingdom, and faithful Henry had helped them both in, he got up behind, and was full of joy at his master’s deliverance. And when they had gone a part of the way, the Prince heard a sound at the back of the carriage, as if something had broken, and he turned round and cried, “Henry, the wheel must be breaking!” but Henry answered,

Again, and yet once again there was the same sound, and the Prince thought it must be the wheel breaking. But it was the breaking of the other bands from faithful Henry’s heart, because he was so relieved and happy.

‘Well, I’ll give my daughter to the one who jumps highest!’ said the king; ‘for it would look so mean to let these people jump for nothing!’

One day, as Margery was coming home from the next village, she met with some wicked, idle boys, who had tied a young raven to a staff. She offered at once to buy the raven for a penny, and this they agreed to.