The Further Adventures of Paupukewis and the Wolves

Paupukewis stayed with the wolves a long time. They did all the hunting, so he found it very easy to live. As winter came on, the young wolves hunted alone.

“Stay at home, dear father,” they said to the Gray Wolf. “You must let us work for you while the weather is cold.”

Paupukewis sat idle, but the Gray Wolf spent his time cracking the large bones of moose into smaller pieces. He intended to pave the floor of his house with them. He noticed that sometimes the pieces fell near Paupukewis; so he said: “Paupukewis, I am going to make very fine splinters of this bone. So cover up your head in case a piece should fall into your eye.” 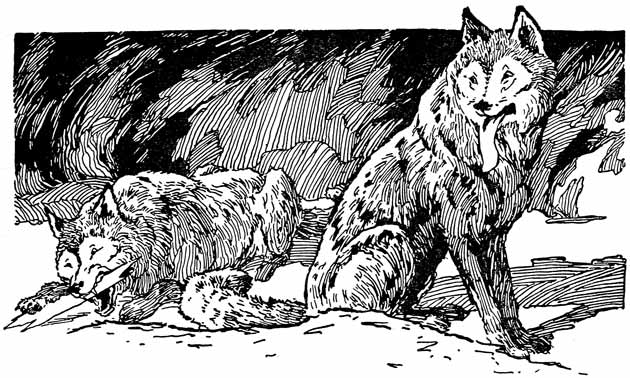 Paupukewis did so. But he was so tricky himself that he thought the old Gray Wolf was going to hurt him in some way. So he kept one eye uncovered, and watched. The Gray Wolf cracked away busily, not looking at his guest. At last a splinter flew into the eye of Paupukewis.

“You must have been looking, Paupukewis, or you would not have been hurt,” said Gray Wolf.

“I was not looking,” said Paupukewis.

The old Gray Wolf shook his head slowly and gravely; it seemed to him a very wicked thing to tell such a falsehood.

Paupukewis was very angry. When the Gray Wolf lay down by the fire to sleep, he took the big bone of a moose, and crept up softly to him. Then he hit his host a blow on the head.

The poor Gray Wolf sprang to his feet, and then sank weakly on the floor.

“Strike you?” said Paupukewis. “You are mistaken. You must have been looking.”

Then Paupukewis ran off laughing.

By this time the six sons came home. They were very angry at what had happened. They wanted to turn Paupukewis out of doors. But the old Wolf would not allow that.

“But he must be punished in some way,” said the sons.

They decided that Paupukewis should be made to do his own hunting. So when he came in, expecting to have his dinner as usual, he was told that he must find his own game. Out he went, and the six sons followed him to see what he would do.

Paupukewis had good luck. He soon found a fat moose. He was very hungry and sat down to eat. But he did not know where to begin. So he began to talk to himself in a silly way. 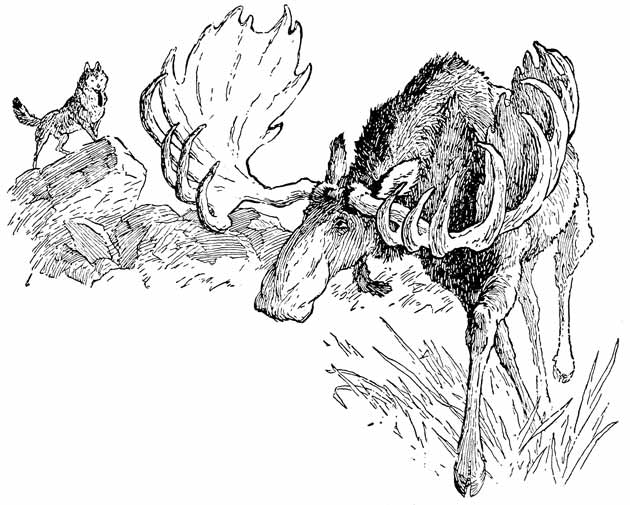 “Shall I begin at the head?” he said. “No, for if I do the animals will laugh and say, ‘He ate the moose backward.’”

Then he sat down by the side of the moose.

Next he sat down by the hind quarter.

“If I eat here,” he said, “they will say, ‘Paupukewis ate the moose forward.’ But I do not care. I must begin somewhere.”

He took a bite, but at that moment the tree under which he sat began to creak. Two of its branches were rubbing against each other.

“Stop, stop,” said Paupukewis. “I cannot eat while you make such a noise.”

The tree stopped for a moment, and then the two branches began rubbing again.

“You must stop,” said Paupukewis angrily.

He left his food, and climbed into the tree. Then he took hold of the two branches, meaning to tear them off. But the two branches curled themselves about him so that he could not move.

At that moment the six young wolves came up. To punish Paupukewis they ate his moose. Paupukewis watched them, unable to stir. At night there was a heavy storm of wind and the two branches were torn apart. Then Paupukewis climbed down. He decided that he was tired of the wolves. So he started off alone. 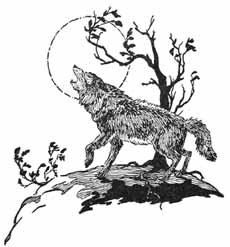