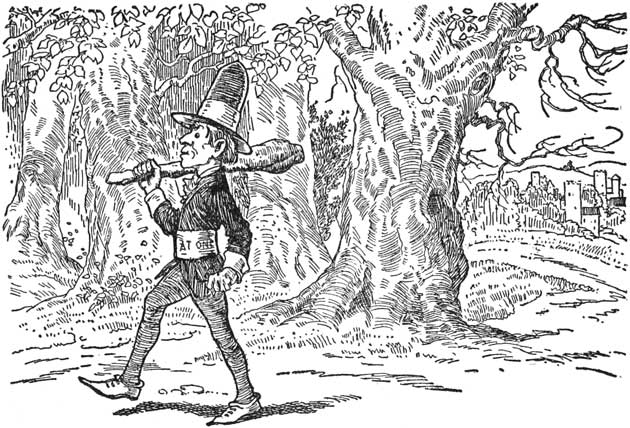 Illustration by John B. Gruelle.

The cry sounded pleasant in the little tailor’s ears, so he put his head out of the window, and called out, “Here, my good woman—come here, if you want a customer.”

So the poor woman climbed the steps with her heavy basket, and was obliged to unpack and display all her pots to the tailor. He looked at every one of them, and lifting all the lids, applied his nose to each, and said at last, “The jelly seems pretty good; you may weigh me out four half ounces, or I don’t mind having a quarter of a pound.”

The woman, who had expected to find a good customer, gave him what he asked for, but went off angry and grumbling.

“This jelly is the very thing for me,” cried the little tailor; “it will give me strength and cunning”; and he took down the bread from the cupboard, cut a whole round of the loaf, and spread the jelly on it, laid it near him, and went on stitching more gallantly than ever. All the while the scent of the sweet jelly was spreading throughout the room, where there were quantities of flies, who were attracted by it and flew to partake.

“Now then, who asked you to come?” said the tailor, and drove the unbidden guests away. But the flies, not understanding his language, were not to be got rid of like that, and returned in larger numbers than before. Then the tailor, not being able to stand it any longer, took from his chimney-corner a ragged cloth, and saying, “Now, I’ll let you have it!” beat it among them unmercifully. When he ceased, and counted the slain, he found seven lying dead before him. “This is indeed somewhat,” he said, wondering at his own gallantry; “the whole town shall know this.”

So he hastened to cut out a belt, and he stitched it, and put on it in large capitals, “Seven at one blow!” “—The town, did I say!” said the little tailor; “the whole world shall know it!” And his heart quivered with joy, like a lamb’s tail.

The tailor fastened the belt round him, and began to think of going out into the world, for his workshop seemed too small for his worship. So he looked about in all the house for something that would be useful to take with him, but he found nothing but an old cheese, which he put in his pocket. Outside the door he noticed that a bird had got caught in the bushes, so he took that and put it in his pocket with the cheese. Then he set out gallantly on his way, and as he was light and active he felt no fatigue.

The way led over a mountain and when he reached the topmost peak he saw a terrible giant sitting there and looking about him at his ease. The tailor went bravely up to him, called out to him, and said, “Comrade, good day! There you sit looking over the wide world! I am on the way thither to seek my fortune; have you a fancy to go with me?”

The giant looked at the tailor contemptuously, and said, “You little rascal! You miserable fellow!”

“That may be!” answered the little tailor, and undoing his coat he showed the giant his belt; “you can read there whether I am a man or not!”

The giant read: “Seven at one blow!” and thinking it meant men that the tailor had killed, felt at once more respect for the little fellow. But as he wanted to prove him, he took up a stone and squeezed it so hard that water came out of it. “Now you can do that,” said the giant—“that is, if you have the strength for it.”

The red-hot fire is built, the bubbling pot is hung, the steely knives are sharpened.

Elidor, or the Golden Ball

There appeared to the boy two little men, saying: ‘If thou wilt come with us, we will lead thee into a land full of sports and delights.’

‘Be happy,’ cried the Nightingale, ‘be happy; you shall have your red rose. I will build it out of music by moonlight, and stain it with my own heart's-blood. All that I ask of you in return is that you will be a true lover.’