The latter screamed like a mouse whose tail has been trodden on, and heaped insults on the boy, threatening to kill him as soon as she was free.

“Do not spare her!” said Enrique at each insult.

And the blows again descended on Death like rain. One knocked an eye out, another knocked all her teeth out, although it must be admitted they were false, and another took her hair out by the roots, leaving her head quite bald.

Then Enrique cut a sprig of the Ivy and said to the ring, “Take me to my sister’s side.”

Immediately he found himself at the bedside, where all the family were weeping over the approaching death of the girl.

“Here is something which will cure my little sister,” said the boy.

And drawing near her, he squeezed into her mouth the juice of the fresh ivy he had plucked in the Garden of Health.

The girl at once opened her eyes and called her mother, and, amidst the general surprise, asked to be dressed.

The family would not do so until the doctor said that indeed she was well and sound. They all complimented Enrique enthusiastically, until at length the boy said:

He went to the same place where he had met the kid, but did not see her. In vain he ran about in all directions. But he had not got the ring of Agrajes for nothing.

“Ring,” he said, “bring me the kid that was here a short time ago.”

And the kid appeared.

“What do you want of me, Enrique?” asked the animal.

“To thank you, and to ask how I may serve you,” answered Enrique.

“I see that you are grateful, and I wish you to know who I am. I am called Atala, and am the daughter of Agrajes, the magician. I put my father’s ring beside you with the object that you might be able to save your sister.”

“I should like to know you in your real form and not in that of a kid.”

“Well, here I am,” exclaimed Atala.

And thereupon she transformed herself into a lovely girl of more or less Enrique’s age. 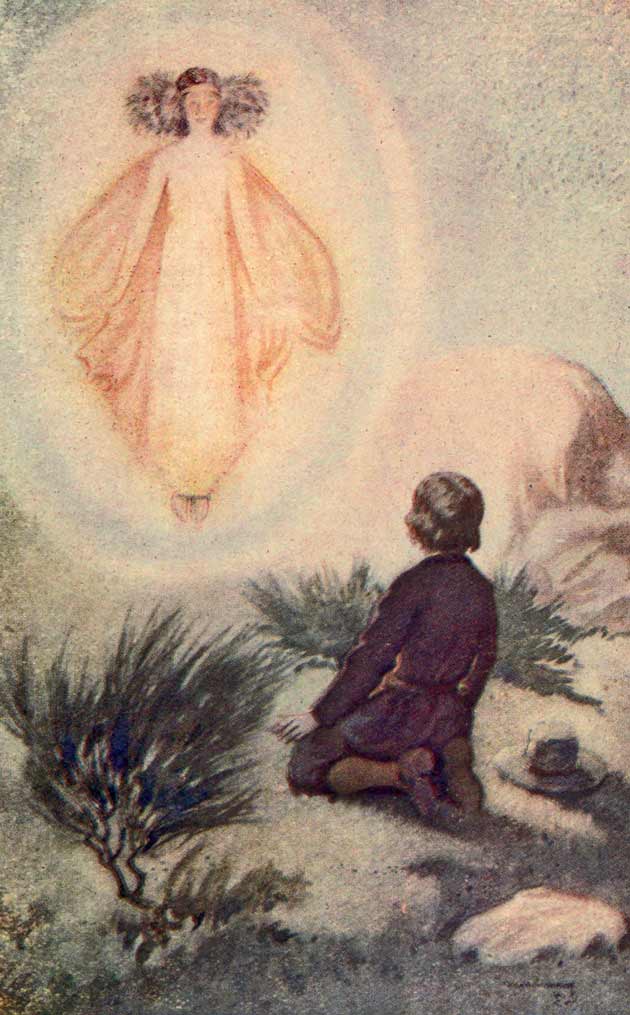 She transformed herself into a lovely girl.

“How pretty you are!” exclaimed the boy. “Come home and play with my little sister, who is now quite well, thanks to you.”

“I can deny you nothing while you wear this ring,” answered the girl.

Atala disappeared at once, and when Enrique thought she had gone never to return, she reappeared smiling, and said:

“I have been for a moment to ask my father’s permission to accompany you.”

They went to Enrique’s house together, and he introduced her to his parents as Luisa’s saviour. They feted her with cakes and sweets, and on saying good-bye she promised to come back every afternoon to play with her little friends.

One day Agrajes himself visited Enrique’s home, to make the acquaintance of the family of which his daughter spoke so much, and on going away he touched in a special way an old chest.

“Open it, presently,” he said on saying farewell.

On opening it they found it full to the brim of gold coins. On it there was a paper which said: “A present from Agrajes to two very nice children.”

With that money Enrique followed his career and Luisa had a splendid dowry, and with that and the love of their parents and friends they were two very happy beings.

Find stories similar to The Garden of Health

The King’s Son and the Magic Song

The Fairy also taught him a magic song, ‘Come, cattle, come, all you cattle come to me,’ the melody of which was so enchanting that all cattle who heard it followed the singer.