High above the city, on a tall column, stood the statue of the Happy Prince. He was gilded all over with thin leaves of fine gold, for eyes he had two bright sapphires, and a large red ruby glowed on his sword-hilt.

He was very much admired indeed. “He is as beautiful as a weathercock,” remarked one of the Town Councillors who wished to gain a reputation for having artistic tastes; “only not quite so useful,” he added, fearing lest people should think him unpractical, which he really was not.

“I am glad there is some one in the world who is quite happy,” muttered a disappointed man as he gazed at the wonderful statue.

“He looks just like an angel,” said the Charity Children as they came out of the cathedral in their bright scarlet cloaks and their clean white pinafores.

“How do you know?” said the Mathematical Master, “you have never seen one.”

“Ah! but we have, in our dreams,” answered the children; and the Mathematical Master frowned and looked very severe, for he did not approve of children dreaming. 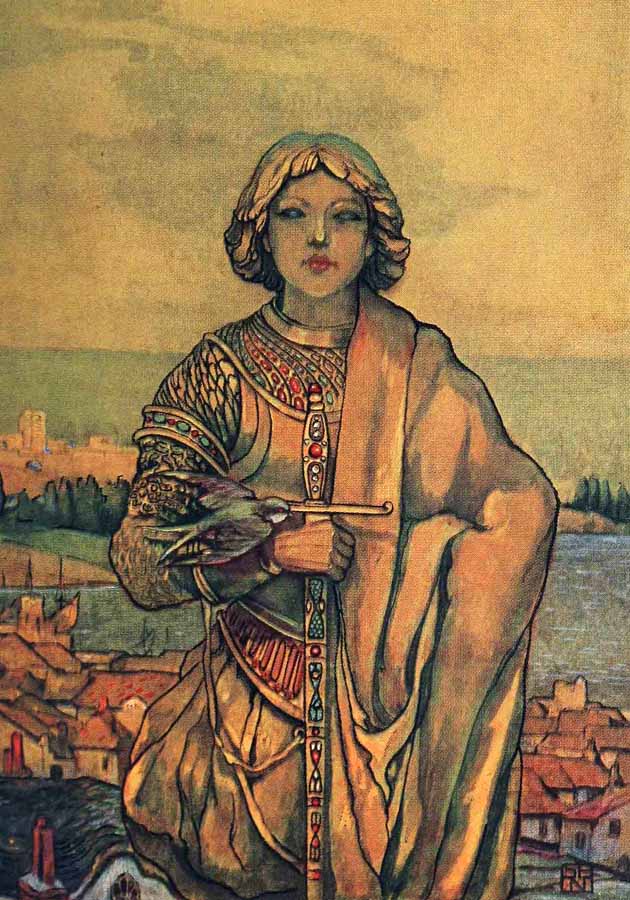 One night there flew over the city a little Swallow. His friends had gone away to Egypt six weeks before, but he had stayed behind, for he was in love with the most beautiful Reed. He had met her early in the spring as he was flying down the river after a big yellow moth, and had been so attracted by her slender waist that he had stopped to talk to her.

“Shall I love you?” said the Swallow, who liked to come to the point at once, and the Reed made him a low bow. So he flew round and round her, touching the water with his wings, and making silver ripples. This was his courtship, and it lasted all through the summer.

“It is a ridiculous attachment,” twittered the other Swallows; “she has no money, and far too many relations;” and indeed the river was quite full of Reeds. Then, when the autumn came they all flew away.

After they had gone he felt lonely, and began to tire of his lady-love. “She has no conversation,” he said, “and I am afraid that she is a coquette, for she is always flirting with the wind.” And certainly, whenever the wind blew, the Reed made the most graceful curtseys. “I admit that she is domestic,” he continued, “but I love travelling, and my wife, consequently, should love travelling also.”

“Will you come away with me?” he said finally to her; but the Reed shook her head, she was so attached to her home.

“You have been trifling with me,” he cried. “I am off to the Pyramids. Good-bye!” and he flew away.

All day long he flew, and at night-time he arrived at the city. “Where shall I put up?” he said; “I hope the town has made preparations.”

Then he saw the statue on the tall column.

“I will put up there,” he cried; “it is a fine position, with plenty of fresh air.” So he alighted just between the feet of the Happy Prince.

“I have a golden bedroom,” he said softly to himself as he looked round, and he prepared to go to sleep; but just as he was putting his head under his wing a large drop of water fell on him. “What a curious thing!” he cried; “there is not a single cloud in the sky, the stars are quite clear and bright, and yet it is raining. The climate in the north of Europe is really dreadful. The Reed used to like the rain, but that was merely her selfishness.”

Then another drop fell.

“What is the use of a statue if it cannot keep the rain off?” he said; “I must look for a good chimney-pot,” and he determined to fly away.

But before he had opened his wings, a third drop tell, and he looked up, and saw—Ah! what did he see?

The eyes of the Happy Prince were filled with tears, and tears were running down his golden cheeks. His face was so beautiful in the moonlight that the little Swallow was filled with pity.