All the next day he sat on the Prince’s shoulder, and told him stories of what he had seen in strange lands. He told him of the red ibises, who stand in long rows on the banks of the Nile, and catch gold-fish in their beaks; of the Sphinx, who is as old as the world itself, and lives in the desert, and knows everything; of the merchants, who walk slowly by the side of their camels and carry amber beads in their hands; of the King of the Mountains of the Moon, who is as black as ebony, and worships a large crystal; of the great green snake that sleeps in a palm tree, and has twenty priests to feed it with honey-cakes; and of the pygmies who sail over a big lake on large flat leaves, and are always at war with the butterflies. 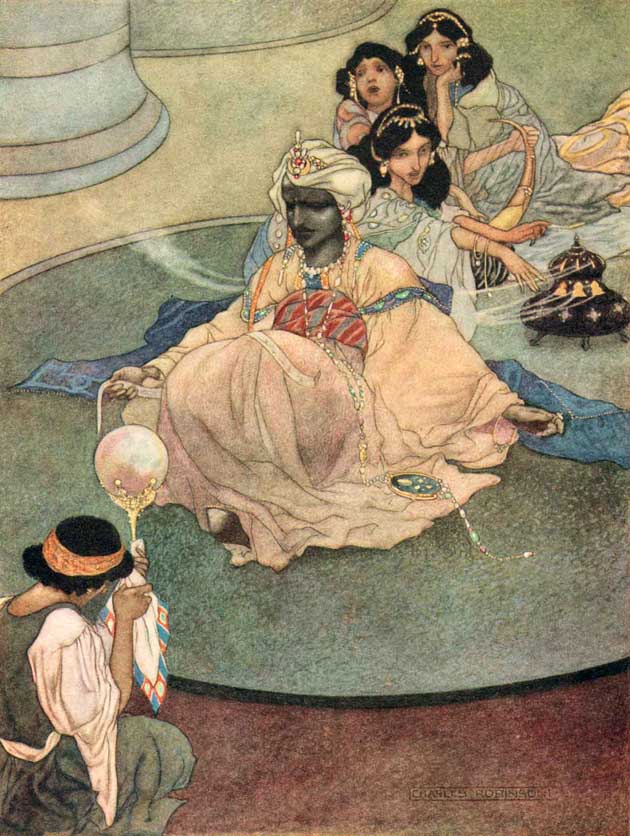 The King of the Mountains of the MoonIllustration by Charles Robinson

“Dear little Swallow,” said the Prince, “you tell me of marvellous things, but more marvellous than anything is the suffering of men and of women. There is no Mystery so great as Misery. Fly over my city, little Swallow, and tell me what you see there.”

So the Swallow flew over the great city, and saw the rich making merry in their beautiful houses, while the beggars were sitting at the gates. He flew into dark lanes, and saw the white faces of starving children looking out listlessly at the black streets. Under the archway of a bridge two little boys were lying in one another’s arms to try and keep themselves warm. “How hungry we are!” they said. “You must not lie here,” shouted the Watchman, and they wandered out into the rain. 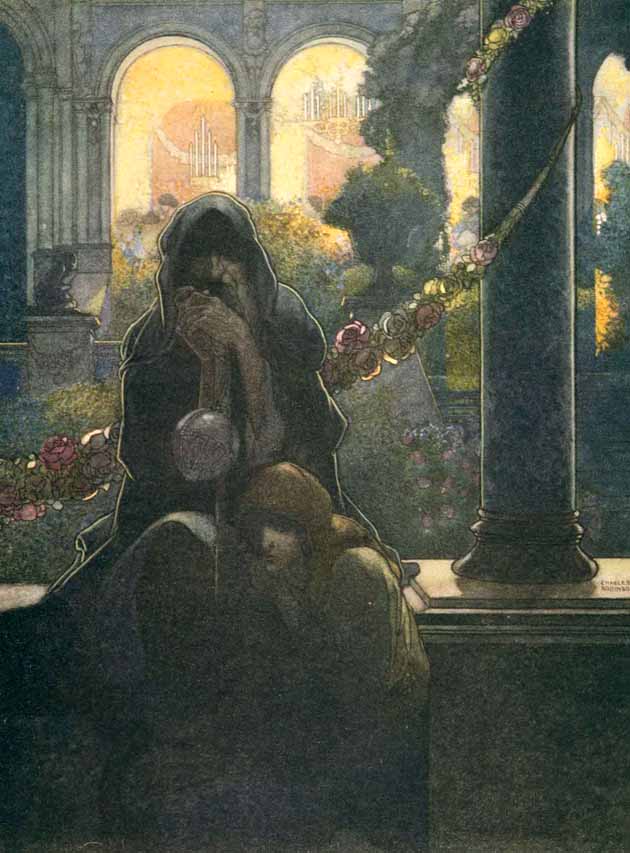 The rich making merry in their beautiful houses, while the beggars are sitting at the gatesIllustration by Charles Robinson

Then he flew back and told the Prince what he had seen.

“I am covered with fine gold,” said the Prince, “you must take it off, leaf by leaf, and give it to my poor; the living always think that gold can make them happy.”

Then the snow came, and after the snow came the frost. The streets looked as if they were made of silver, they were so bright and glistening; long icicles like crystal daggers hung down from the eaves of the houses, everybody went about in furs, and the little boys wore scarlet caps and skated on the ice.

The poor little Swallow grew colder and colder, but he would not leave the Prince, he loved him too well. He picked up crumbs outside the baker’s door when the baker was not looking, and tried to keep himself warm by flapping his wings.

But at last he knew that he was going to die. He had just strength to fly up to the Prince’s shoulder once more. “Good-bye, dear Prince!” he murmured, “will you let me kiss your hand?”

“I am glad that you are going to Egypt at last, little Swallow,” said the Prince, “you have stayed too long here; but you must kiss me on the lips, for I love you.”

“It is not to Egypt that I am going,” said the Swallow. “I am going to the House of Death. Death is the brother of Sleep, is he not?”

And he kissed the Happy Prince on the lips, and fell down dead at his feet.

At that moment a curious crack sounded inside the statue, as if something had broken. The fact is that the leaden heart had snapped right in two. It certainly was a dreadfully hard frost.

Early the next morning the Mayor was walking in the square below in company with the Town Councillors. As they passed the column he looked up at the statue: “Dear me! how shabby the Happy Prince looks!” he said.

“How shabby, indeed!” cried the Town Councillors, who always agreed with the Mayor; and they went up to look at it.

“The ruby has fallen out of his sword, his eyes are gone, and he is golden no longer,” said the Mayor; “in fact, he is little better than a beggar!”

“Little better than a beggar,” said the Town Councillors.

“And here is actually a dead bird at his feet!” continued the Mayor. “We must really issue a proclamation that birds are not to be allowed to die here.” And the Town Clerk made a note of the suggestion.

There lived an old woman who possessed a very pretty garden, wherein she cultivated a most beautiful bed of tulips. The pixies, so delighted in this spot, would carry their elfin babes thither, and sing them to rest.

The Expected Spaniel has arrived, only instead of One Spaniel there are Two.

Nyankupon was amazed at Spider's cleverness in fulfilling the three conditions. He immediately gave him permission for the future to call all the old tales Anansi tales.