Once upon a time there was a King and Queen who were very happy together, but great regret was felt that they had no heir. One day when the Queen was sitting by a fountain, a large crab appeared, and said, “Great Queen, you shall have your wish.” The crab then changed into a handsome little old woman, and walked out of the fountain without being wetted. She conducted the Queen through a path in the wood which she had never seen before, although she had been in the wood a thousand times.

The Queen’s astonishment was increased by the sight of a palace of diamonds. The gates opened, and six fairies issued forth. They all made a courtesy to the Queen, and each presented her with a flower of precious stones. There was a rose, a tulip, an anemone, a columbine, a carnation, and a pomegranate. “Madam,” said they, “we are delighted to announce to you that you will have a beautiful Princess, whom you will call Désirée. Send for us the moment she is born, for we wish to endow her with all good qualities; hold the bouquet, and name each flower, thinking of us, and we shall be instantly in your chamber.”

The Queen returned to court, and soon after a Princess was born, whom she named Désirée; she took the bouquet, named the flowers one after another, and all the fairies arrived. They took the little Princess upon their knees and kissed her, one endowing her with virtue, another with wit, a third with beauty, the next with good fortune, the fifth with continual health, and the last with the gift of doing everything well which she undertook.

The Queen thanked them for the favours conferred upon the little Princess, when there entered so large a crab that the door was scarcely wide enough for her to pass through. “Ah! ungrateful Queen,” said the crab, “have you so soon forgotten the Fairy of the Fountain, and the service I rendered you by introducing you to my sisters! You have summoned them all, and I alone am neglected!” The Queen asked her pardon; and the fairies, who feared she would endow the child with misery and misfortune, seconded the Queen’s endeavours to appease her. “Very well,” said she; “I will not do all the mischief to Désirée I had intended. However, I warn you that if she sees the light of day before she is fifteen, it will perhaps cost her her life.” 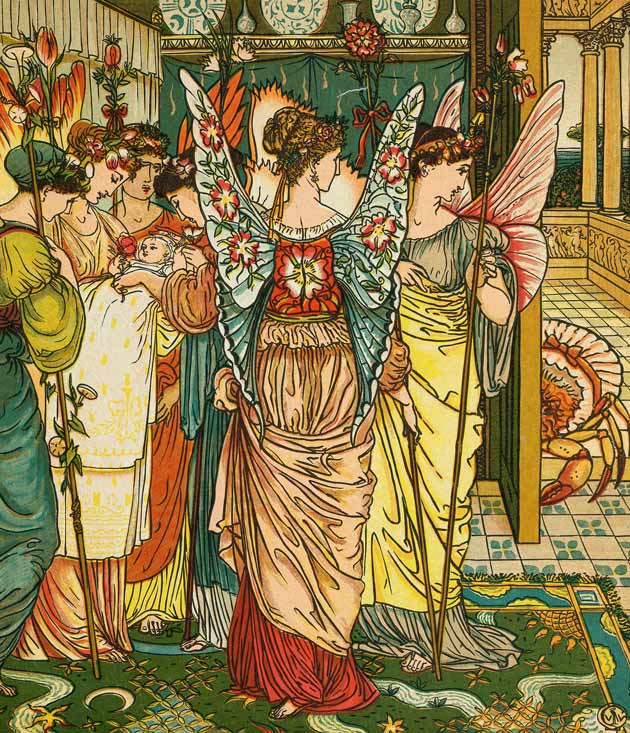 As soon as the crab had left, the Queen asked the fairies to preserve her daughter from the threatened evil, and they decided to build a palace without doors or windows, and to educate the Princess there till the fatal period should have expired. Three taps of a wand produced this grand edifice, in which there was no light but that of wax candles and lamps; but there were so many of these that it was as light as day. The Princess’s intelligence and skill enabled her to learn very quickly, while her wit and beauty charmed everybody; the Queen would never have lost sight of her, if her duty had not obliged her to be near the King. The good fairies every now and then went to see the Princess. As the time drew near for her to leave the palace, the Queen had her portrait taken, and sent it to the greatest courts of the world. There was not a prince who did not admire it; but there was one who could never leave it. He shut himself up, and talked to it as though it could understand him. The King, who now hardly ever saw his son, inquired what prevented his appearing as cheerful as usual. Some courtiers told him they feared the Prince would go out of his mind; for he remained whole days shut up in his room, talking as though he had some lady with him. The King sent for his son, and asked him why he was so altered. The Prince threw himself at his fathers feet, and said, “I confess that I am desperately in love with Princess Désirée, and wish to marry her.” He ran for the portrait, and brought it to the King, who said, “Ah! my dear Guerrier, I consent to your wish. I shall become young again when I have so lovely a Princess at my court.”

The Prince begged the King to send an ambassador to Princess Désirée; and Becafigue, a very eloquent young nobleman, was selected.

The ambassador took his leave of the Prince, who said, “Remember, my dear Becafigue, that my life depends upon this marriage. Omit no means of bringing the lovely Princess back with you.”

The ambassador took with him many presents for the Princess, and also a portrait of the Prince.

On his arrival, the King and Queen were enchanted; they had heard of Prince Guerrier’s personal merits, and were well content to have found a husband for their daughter so worthy of her.

The King and Queen resolved that the ambassador should see Désirée, but the Fairy Tulip said to the Queen, “Take care, Madam, that you do not introduce Becafigue to the Princess; he must not see her yet, and do not consent to let her go until she is fifteen years old; for if she quit her palace before then some misfortune will befall her.” And the Queen promised to follow her advice. 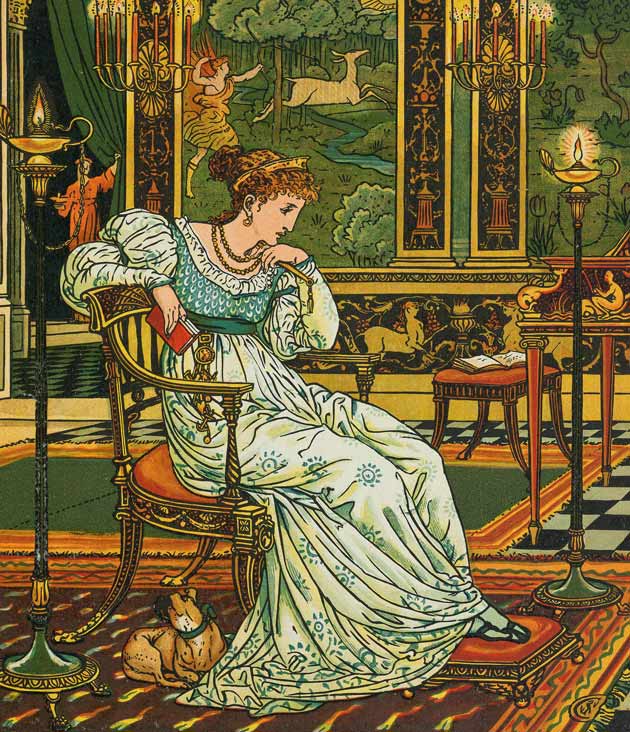 On the ambassadors arrival, he asked to see the Princess, and was surprised that that favour was denied him. “It is no caprice of ours, my Lord Becafigue,” said the King, “that induces us to refuse a request which you are perfectly justified in making;” and he then related to the ambassador the Princess’s extraordinary adventure.

The Queen had not yet spoken to her daughter of what was passing; but the Princess knew a great marriage was in agitation for her.

The ambassador, finding his endeavours to obtain the Princess were useless, took leave of the King, and returned. When the Prince found he could not hope to see his dear Désirée for more than three months, he fell dangerously ill. The King was in despair, and resolved to go to the father and mother of Désirée, and entreat them no longer to defer the marriage.

During all this time Désirée had scarcely less pleasure in looking at the Prince’s portrait than he had in gazing at hers. And her attendants did not fail to discover this—amongst others, Giroflée and Longue-Épine, her maids of honour. Giroflée loved her dearly, and was faithful; but Longue-Épine had always nourished a secret jealousy of her. Her mother had been the Princess’s governess, and was now her principal lady-in-waiting, but as she doted on her own daughter, she could not wish well to Désirée.

From The Hind in the Wood, by Walter Crane.
London, New York: George Routledge and Sons, 1875.

Find stories similar to The Hind in the Wood

The two travelers in their pockets, and could not believe their eyes when they saw that they were not filled with coals, but with pure gold.

The poor little girl had all the cooking, cleaning, and serving to do for all seven brothers and all their seven wives as well.