For a long time the boat danced on the waves and finally it came near a large merchant vessel, which struck against it with such a shock that Ivan awoke. The crew on the large vessel saw Ivan and pitied him. So they decided to take him along with them and did so. High, very high, above in the sky they perceived cranes. Ivan said to the sailors:

“Be careful; I hear the birds predicting a storm. Let us enter a harbor or we shall suffer great danger and damage. All the sails will be torn and all the masts will be broken.”

But no one paid any attention and they went farther on. In a short time the storm arose, the wind tore the vessel almost to pieces, and they had a very hard time to repair all the damage. When they were through with their work they heard many wild swans flying above them and talking very loud among themselves.

“What are they talking about?” inquired the men, this time with interest.

“Be careful,” advised Ivan. “I hear and distinctly understand them to say that the pirates, the terrible sea robbers, are near. If we do not enter a harbor at once they will imprison and kill us.”

The crew quickly obeyed this advice and as soon as the vessel entered the harbor the pirate boats passed by and the merchants saw them capture several unprepared vessels. When the danger was over, the sailors with Ivan went farther, still farther. Finally the vessel anchored near a town, large and unknown to the merchants. A king ruled in that town who was very much annoyed by three black crows. These three crows were all the time perching near the window of the king’s chamber. No one knew how to get rid of them and no one could kill them. The king ordered notices to be placed at all crossings and on all prominent buildings, saying that whoever was able to relieve the king from the noisy birds would be rewarded by obtaining the youngest korolevna, the king’s daughter, for a wife; but the one who should have the daring to undertake but not succeed in delivering the palace from the crows would have his head cut off. Ivan attentively read the announcement, once, twice, and once more. Finally he made the sign of the cross and went to the palace. He said to the servants:

“Open the window and let me listen to the birds.”

The servants obeyed and Ivan listened for a while. Then he said:

“Show me to your sovereign king.”

When he reached the room where the king sat on a high, rich chair, he bowed and said:

“There are three crows, a father crow, a mother crow, and a son crow. The trouble is that they desire to obtain thy royal decision as to whether the son crow must follow his father crow or his mother crow.”

The king answered: “The son crow must follow the father crow.”

As soon as the king announced his royal decision the crow father with the crow son went one way and the crow mother disappeared the other way, and no one has heard the noisy birds since. The king gave one-half of his kingdom and his youngest korolevna to Ivan, and a happy life began for him.

In the meantime his father, the rich merchant, lost his wife and by and by his fortune also. There was no one left to take care of him, and the old man went begging under the windows of charitable people. He went from one window to another, from one village to another, from one town to another, and one bright day he came to the palace where Ivan lived, begging humbly for charity. Ivan saw him and recognized him, ordered him to come inside, and gave him food to eat and also supplied him with good clothes, asking questions:

“If thou art so very good,” answered the poor father, without knowing that he was speaking to his own son, “let me remain here and serve thee among thy faithful servants.”

“Dear, dear father!” exclaimed Ivan, “thou didst doubt the true song of the nightingale, and now thou seest that our fate was to meet according to the predictions of long ago.”

The old man was frightened and knelt before his son, but his Ivan remained the same good son as before, took his father lovingly into his arms, and together they wept over their sorrow.

Several days passed by and the old father felt courage to ask his son, the korolevitch:

“Tell me, my son, how was it that thou didst not perish in the boat?”

“I presume,” he answered, “that it was not my fate to perish at the bottom of the wide sea, but my fate was to marry the korolevna, my beautiful wife, and to sweeten the old age of my dear father.” 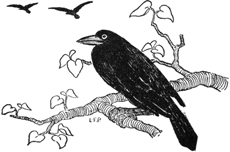 The Evergreen Tree and the Wilderness Marigold

How Ball-Carrier finished his Task