The Bodhisatta was at one time born in the region of Himavanta as a white crane; now Brahmadatta was at that time reigning in Benares. Now it chanced that as a lion was eating meat a bone stuck in his throat. The throat became swollen, he could not take food, his suffering was terrible. The crane seeing him, as he was perched on a tree looking for food, asked, “What ails thee, friend?” He told him why. “I could free thee from that bone, friend, but dare not enter thy mouth for fear thou mightest eat me.”

“Don’t be afraid, friend, I’ll not eat thee; only save my life.” “Very well,” says he, and caused him to lie down on his left side. But thinking to himself, “Who knows what this fellow will do?” he placed a small stick upright between his two jaws that he could not close his mouth, and inserting his head inside his mouth struck one end of the bone with his beak. Whereupon the bone dropped and fell out. As soon as he had caused the bone to fall, he got out of the lion’s mouth, striking the stick with his beak so that it fell out, and then settled on a branch. 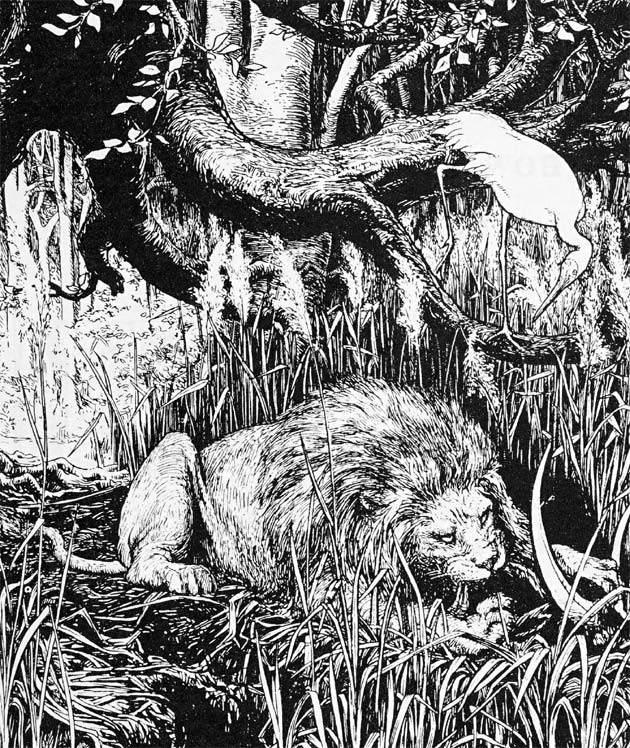 The lion gets well, and one day was eating a buffalo he had killed. The crane, thinking “I will sound him,” settled on a branch just over him, and in conversation spoke this first verse:

A service have we done thee
To the best of our ability,
King of the Beasts! Your Majesty!
What return shall we get from thee?

In reply the Lion spoke the second verse :

As I feed on blood,
And always hunt for prey,
’Tis much that thou art still alive
Having once been between my teeth.

Then in reply the crane said the two other verses:

Ungrateful, doing no good,
Not doing as he would be done by,
In him there is no gratitude.
To serve him is useless.

His friendship is not won
By the clearest good deed.
Better softly withdraw from him,
Neither envying nor abushing.

And having thus spoken the crane flew away.

And when the great Teacher, Gautama the Buddha, told this tale, he used to add: “Now at that tune the Horn was Devadatta the Traitor, but the white crane was I myself.”