As a great majestic Lion was gathering himself up within his lair, to astonish mankind with the wondrous powers of his roar, there came buzzing under his very nose a troublesome Gnat, who challenged him to combat.

“What avail your tremendous lungs and cavernous throat, compared to the melodious pipes of my little organ? and, as for your strength, endurance, and resolution, I defy you to put that point to an issue at once.” 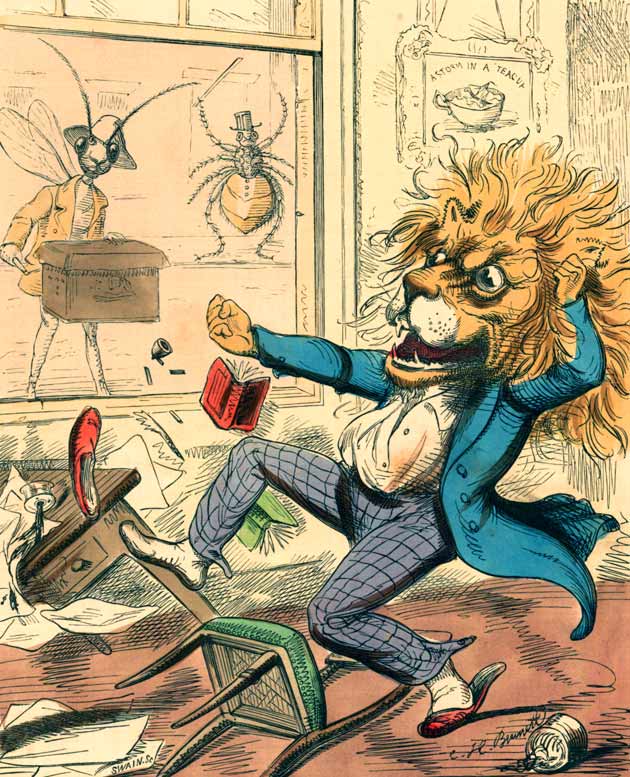 The Lion, finding the insect would not be brushed away, was fain to accept the challenge; so to it they went. But the Lion had no chance, for the Gnat charged direct into the drum of the Lion’s ear, and there twinged him until in very despair he tore himself with his own paws. In the end the Gnat gained the victory over the noble beast, upon which he flew away, but had the misfortune afterwards in his flight to strike into a Cobweb, where he, the conqueror, fell a prey to a large Blue-bottle Spider.

Little miseries are the greatest torments.

From The Fables of Æsop and Others, Translated into Human Nature, by Charles H. Bennett.
London: W. Kent and Company, 1857.