Far out at sea the water is as blue as the petals of the loveliest cornflower, and as clear as the purest glass, but it is very deep, deeper than the length of the cable of any anchor and many church steeples would have to be put on top of each other to reach from the bottom over the water. Down there the sea people live.

Now you mustn’t for a moment think that down there they have only the bare white sand; oh, no, the strangest trees and plants grow there, with leaves and stems so supple that at the least stir in the water they move as if they were alive. All the fishes, big and little, dart through the branches just like the birds in the air up here. In the very deepest spot lies the castle of the sea king. The walls are of coral and the tall, pointed windows of the clearest amber, but the roof is made of mussel shells that open and close with the flow of the water. That looks lovely, for in each shell lie gleaming pearls, and even a single one of them would be the grandest thing in the crown of a queen.

The sea king down there had been a widower for many years, but his old mother kept house for him. She was a clever woman, but proud of her royal birth, and therefore she wore twelve oysters on her tail; the other people of rank could only wear six. Otherwise she deserved only great praise, especially because she was so fond of her granddaughters, the little sea princesses. They were six lovely children, but the youngest was the most beautiful of them all; her skin was as clear and as fine as a rose leaf, her eyes were as blue as the deepest sea, but, like all the rest, she had no feet, for her body ended in a fishtail.

All day long they could play in the castle, down in the halls, where living flowers grew out of the walls. The large amber windows were opened, and then the fishes swam into them, just as the swallows fly in to us when we open our windows; but the fishes swam straight up to the princesses, ate out of their hands, and let themselves be petted.

Outside the castle was a large garden with fiery red and dark blue trees; the fruits gleamed like gold, and the flowers like a burning fire; because they always kept moving their stalks and leaves. The earth itself was the finest sand, but blue as the flame of brimstone. A strange blue light lay on everything down there; one would have thought oneself high in the air, with the sky above and below, rather than at the bottom of the sea. During a calm the sun could be seen; it seemed like a purple flower, from whose chalice all light streamed out. 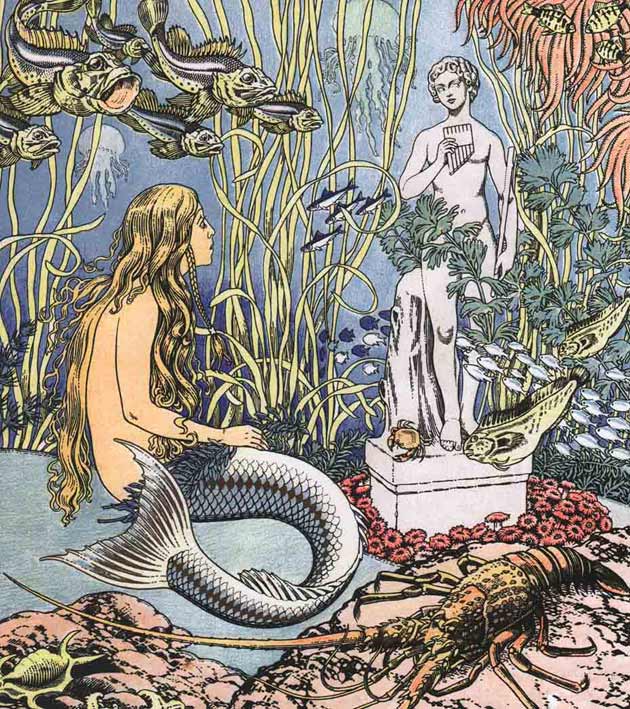 Each of the little princesses had her own little plot in the garden, where she might dig and plant whatever she wanted. One gave her flower bed the form of a whale; another thought it better to make hers like a little mermaid; but the youngest made hers quite round, like the sun, and had only flowers which shone as red as the sun itself. She was a queer child, quiet and thoughtful; and when the other sisters dressed their plots up with strange things they had got from wrecked ships, she would have nothing except the red flowers which resembled the sun, and a pretty marble statue. This was a figure of a charming boy, hewn out of white clear stone, which had sunk down to the bottom of the sea from a wreck. She planted a rose-pink weeping willow beside this statue; the tree grew splendidly; it hung its fresh branches over the statue down to the blue sandy ground, where the shadow showed violet, and moved like the branches; it seemed as if the top of the tree and the roots were playing at kissing each other.

There was no greater pleasure for her than to hear of the world of men above them. The old grandmother had to tell all she knew of ships and towns, of men and animals. She found it especially strange and lovely that the flowers on earth had fragrance, they had none at the bottom of the sea, and that the woods were green, and that the fishes which one saw there among the trees could sing so loud and clear that it was a pleasure to hear them. What the grandmother called fishes were the little birds, otherwise they could not have understood her, for they had never seen a bird.

“When you have completed your fifteenth year,” said the grandmother, “you’ll be allowed to rise up out of the sea, to sit on the rocks in the moonlight, and to see the great ships sailing by. Then you will see forests and towns!”

The next year one of the sisters was fifteen years of age, but each of the others was one year younger than the next; so that the youngest had still all of five years to wait before she could come up from the bottom of the sea, and find out how our world looked. But one promised to tell the others what she had seen and what she had thought the most beautiful on the first day of her visit; for their grandmother didn’t tell them enough—there were so many things they wanted to know about.