None was so full of longing as the youngest—just that one who had the longest time to wait, and who was always quiet and thoughtful. Many a night she stood by the open window, and looked up through the dark blue water at the fishes splashing with their fins and tails. Moon and stars she could see; of course they shone faintly, but through the water they looked much larger than they do to us. When something like a black cloud passed among them, she knew that it was either a whale swimming over her head, or a ship with many people: they certainly did not think that a lovely little mermaid was standing down below stretching up her white hands toward the keel of their ship.

Now the eldest princess was fifteen years old, and might rise up to the surface of the sea.

When she came back, she had a hundred things to tell—but the nicest of all, she said, was to lie in the moonshine on a sandbank in the quiet sea, and to see the large town close to the coast, where the lights twinkled like a hundred stars, and to hear the music and the noise and clamor of carriages and men, to see the many church steeples, and to hear the ringing of the bells. Just because she couldn’t get up there, she longed for them more than for anything else.

Oh, how the youngest sister listened; and afterward when she stood at the open window and looked up through the dark blue water, she thought of the great city with all its bustle and noise; and then she thought she could hear the church bells ringing, even down to the depth where she was.

In the following year, the second sister was allowed to rise up through the water and to swim wherever she pleased. She rose up just as the sun was setting; and that sight seemed to her the most beautiful. The whole sky had looked like gold, she said, and the clouds—well, their loveliness was more than she could describe. Red and violet they sailed away above her, but, far swifter than they, a flight of wild swans flew like a long white veil over the water in the path of the sun. She swam toward them; but the sun sank, and the rose light quenched on the sea and in the clouds.

In the following year the next sister went up. She was the boldest of them all, and therefore she swam up a broad stream that ran to the sea. She saw lovely green hills clothed with vines; castles and farms peeped out from fine woods; she heard how all the birds sang; and the sun shone so warm that she often had to dive under the water to cool her burning face. In a little bay she found a whole swarm of little human children. They were quite naked, and splashed about in the water; she wanted to play with them, but they ran away scared, and a little black animal came—it was a dog, but she had never seen a dog—and it barked at her so terribly that she became frightened, and took to the open sea. But she could never forget the fine woods, the green hills, and the pretty children, who could swim in the water though they had no fishtails. 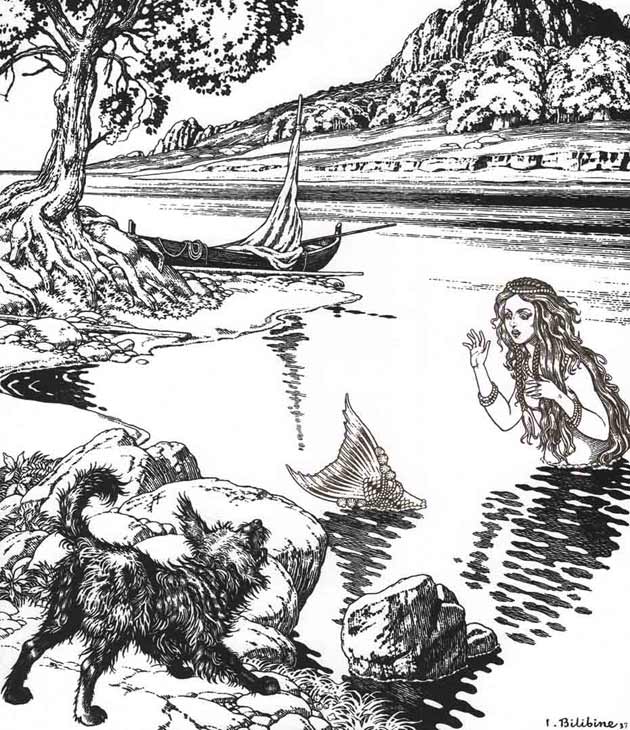 The fourth sister was not so bold: she stayed in the midst of the stormy sea, and declared that just there it was most beautiful. One could see for many miles around, and the sky above looked like a bell of glass. She had seen ships, but only in the far distance—they looked like seagulls; and the funny dolphins had thrown somersaults, and the big whales spouted out water from their nostrils, so that it looked like hundreds of fountains all around.

Now came the turn of the fifth sister. Her birthday came in the winter, and so she saw what the others had not seen the first time. The sea looked quite green, and large icebergs floated all around; every one looked like a pearl, she said, and still they were much taller than the church steeples built by men. They came in the strangest shapes and sparkled like diamonds. She had seated herself on one of the largest, and all the sailing ships tacked around, frightened, to get out of the way of where she sat and let the wind play with her long hair. But in the evening clouds covered the sky, it thundered and lightened, and the black waves lifted the great ice blocks high up, and let them shine in the big flashes. On all the ships the sails were reefed, and there was fear and anguish. But she sat quietly on her floating iceberg, and saw the blue lightning strike zigzag into the sea.

Each of the sisters was delighted with the new and beautiful sights she saw when she first came out of the water; but since they now were allowed, as grown-up girls, to go whenever they liked, they didn’t really care to. They wished themselves back again, and after about a month they said it was best of all down below, for there one felt so cozily at home.

Many an evening hour the five sisters linked arms and rose up in a row over the water. They had lovely voices, more charming than any mortal could have; and when a storm was approaching, so that they might expect that ships would go down, they swam in front of the ships and sang lovely songs, about how beautiful it was at the bottom of the sea, and asked the sailors not to be afraid to come down. But they couldn’t understand the words, and they thought it was the storm; and they did not see the beauty below, for if the ships sank they were drowned, and came as corpses to the sea king’s palace.

When the sisters rose up, arm in arm, in the evening through the water, the little sister stood all alone looking after them; and she felt as if she must cry, but the mermaid has no tears, and so she suffers all the more.

The Sea King and the Magic Jewels

Prince Fire Fade spoke to his elder brother, Prince Fire Flash, and said, ‘Brother, I am aweary of the green hills. Therefore let us now exchange our luck.’