“Oh, if I were only fifteen years old!” said she. “I know I shall love the world up there very much, and the people who live and dwell there.”

At last she was really fifteen years old.

“Well, now you’re off our hands,” said the grandmother, the old dowager queen. “Come, let me dress you up like your sisters.”

And she put a wreath of white lilies in the girl’s hair, but each petal in the flower was half a pearl; and the old lady let eight big oysters pinch on to the princess’s tail, in token of her high rank.

“But that hurts so!” said the little mermaid. “Well, you can’t have both style and comfort,” said the old lady.

Oh, how glad she would have been to shake off all the finery and to lay aside the heavy wreath! Her red flowers in the garden were much more becoming, but she was afraid to change. “Good-by!” she said, and then she rose, light and clear as a bubble, up through the water. 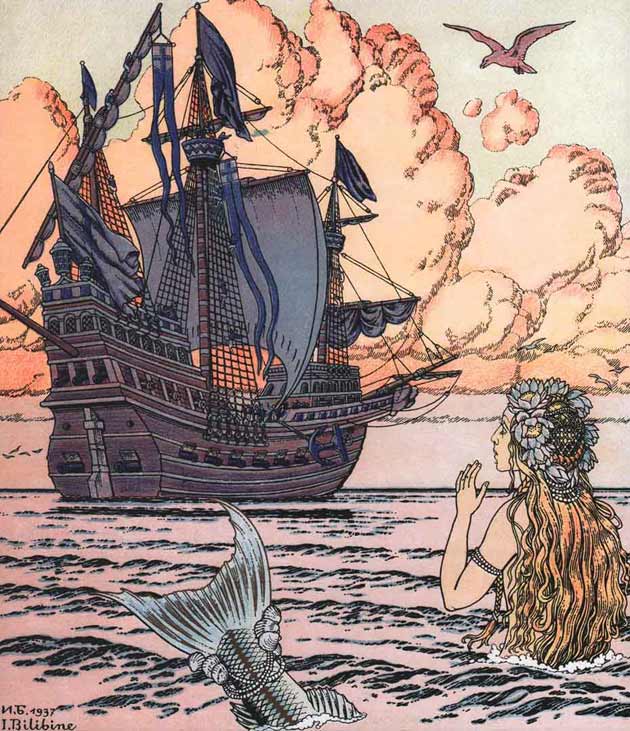 The sun had just set when she lifted her head above the sea, but all the clouds still shone like roses and gold, and in the pale pink sky the evening star gleamed bright and beautiful. The air was mild and fresh and the sea without a ripple. There lay a great ship with three masts; one single sail only was set, for not a breeze stirred, and around in the tackling and on the yards sat the sailors. There was music and singing, and as the evening closed in, hundreds of colored lanterns were lighted, and it looked as if the flags of every nation were waving in the air. The little mermaid swam straight to the cabin window, and each time the sea lifted her up she could look through the panes, which were clear as crystal, and see many people standing dressed in their best. But the handsomest of all was the young prince with the great black eyes; he couldn’t be much more than sixteen years old; it was his birthday, and therefore they were having this fine party. The sailors were dancing on deck; and when the young prince came out, more than a hundred rockets rose into the air; they shone as bright as day, so that the little mermaid was almost frightened, and dived under the water; but soon she put out her head again, and then it seemed just as if all the stars of heaven were falling down on her. She had never seen such fireworks. Big suns whirled around, splendid fire fishes swung up into the blue air, and everything was mirrored in the clear, still sea. The ship itself was so brightly lit up that every little rope could be seen, and the people even more clearly. Oh, how handsome the young prince was! And he pressed the people’s hands and smiled, while the music rang out in the lovely night.

It became late; but the little mermaid could not turn her eyes from the ship and from the beautiful prince. The colored lanterns were put out, rockets no more flew into the air, and no more cannons were fired; but away down in the deep the sea murmured and muttered; and she sat on the water, swaying up and down, so that she could look into the cabin. But as the ship went faster, one sail after another was spread. And now the waves rose higher, big clouds came up, and there was lightning in the distance. Oh! it was going to be terrible weather, therefore the sailors furled the sails. Swiftly rocking, the big ship flew over the wild sea; the water rose up like great black mountains, ready to fall on the masts; but like a swan the ship ducked down among the high waves and was lifted again on the towering waters. The little mermaid just thought this was an amusing trip, but the sailors didn’t think so. The ship groaned and creaked; the thick planks were bent by the heavy blows the sea struck against the ship; the mainmast snapped in two like a thin reed; and the ship lay over on her side, while the water rushed into the hold. Now the little mermaid saw that the people were in danger; she herself had to take care to avoid the beams and bits of the ship which were floating about on the water. One moment it was so pitch dark that she couldn’t see a thing, but when it lightened it was so bright that she could tell every one on board. Every one was doing the best he could for himself. She looked particularly for the young prince, and when the ship went to pieces she saw him sink into the deep sea. At first she was very glad, for now he would come down to her. But then she remembered that people could not live in the water, and that when he got down to her father’s palace he would certainly be dead. No, he must not die: so she swam around among the drifting beams and planks, quite forgetting that one of them might have crushed her. Diving down deep under the water, she again rose high up among the waves, and in this way she at last came to the prince, who could scarcely swim longer in that stormy sea. His arms and legs began to fail him, his beautiful eyes closed, and he would have died if the little mermaid hadn’t come. She held his head up over the water, and then let the waves carry her and him wherever they wanted to. 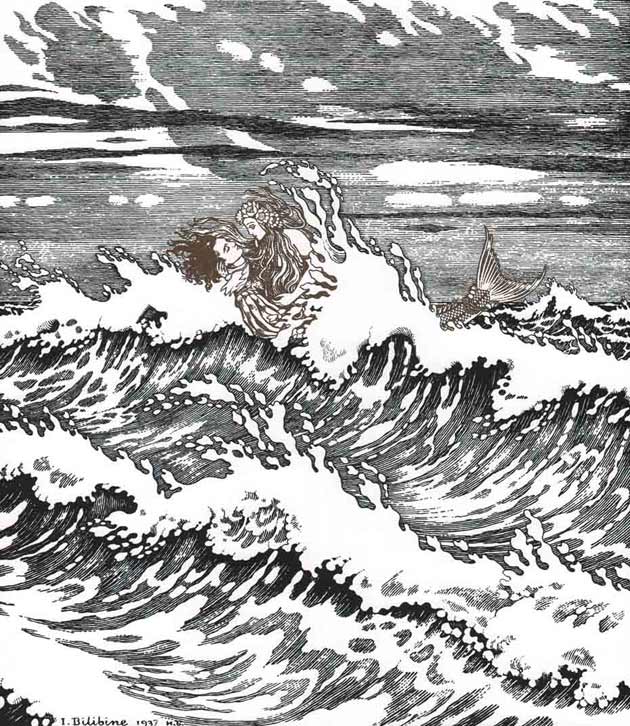 In the morning the bad weather was over. There wasn’t a stick left of the ship. The sun came up red and shining out of the water; it was as if its beams brought back life to the cheeks of the prince, but his eyes remained closed. The mermaid kissed his high fair forehead and put back his wet hair, and he seemed to her to be like the marble statue in her little garden; she kissed him again and hoped that he might live.

Now she saw dry land in front of her—high blue mountains, on whose tops the white snow gleamed as if swans were lying there. Down on the coast were lovely green woods, and there was a building—she could not tell whether it was a church or a convent—but a building it was. In its garden grew orange and lemon trees, and high palms waved in front of the gate. The sea formed a little bay there; it was a still calm, but very deep. Straight toward the rock where the fine white sand had been cast up, she swam with the handsome prince, and laid him on the sand, taking especial care that his head was raised in the warm sunshine.

One night John Roy was going over the mountains, when he fell in with a company of Elves, whose mode of travelling clearly indicated that they were carrying a person off with them.

There are several accounts in natural history of toads being found in the hearts of trees, and in solid rocks, wholly enclosed and shut up from the air and all appearance of food, and being taken alive out of such situations.