Now all the bells rang in the big white building, and many young girls came walking through the garden. Then the little mermaid swam farther out between some high stones that rose out of the water, laid some sea foam on her hair and neck, so that no one could see her little face, and then she watched to see who would come to the poor prince.

In a short time a young girl went that way. She seemed to be quite frightened, but only for a moment; then she brought more people, and the sea maid saw that the prince came back to life and that he smiled at everybody around him. But he didn’t smile in her direction; he couldn’t know, of course, that she had saved him. And she felt very sorrowful; and when he was taken away into the big building, she dived mournfully under the water and returned to her father’s palace.

She had always been gentle and thoughtful, but now she became much more so. Her sisters asked her what she had seen for the first time up there, but she wouldn’t tell them anything.

Many an evening and many a morning she went up to the place where she had left the prince. She saw how the fruits of the garden grew ripe and were gathered; she saw how the snow melted on the high mountain; but she did not see the prince, and so she always returned home more sorrowful still. Then her only comfort was to sit in her little garden, and to put her arms around the beautiful marble statue that looked like the prince; but she didn’t take care of her flowers; they grew like a wilderness over the paths, and trailed their long leaves and stalks up into the tree branches, so that it was quite dark there.

At last she couldn’t stand it any longer, and told everything to one of her sisters, and then all the others heard of it too; but nobody knew of it except these and a few other mermaids who didn’t say a thing about it except to their best friends. One of these knew who the prince was; she, too, had seen the festival on board the ship; and she knew where he came from and where his kingdom lay.

“Come, little sister!” said the other princesses; and, linking their arms together, they rose up in a long row out of the sea, at the place where they knew the prince’s palace stood.

This palace was built of a pale yellow, glistening stone, with great marble staircases, one of which went right down into the sea. Over the roof rose splendid gilt cupolas, and between the pillars which surrounded the whole building stood marble statues which looked as if they were alive. Through the clear glass in the tall windows one looked into the most gorgeous halls, where costly silk curtains and tapestries were hung, and all the walls were decked with splendid pictures, so that it was a perfect delight to look at them. In the middle of the largest hall a big fountain splashed; its jets shot high up toward the glass dome in the ceiling, through which the sun shone down upon the water and on the lovely plants growing in the great basin.

Now she knew where he lived, and many an evening and many a night she spent there on the water. She swam far closer to the land than any of the others would have dared; indeed, she even went up the narrow canal under the splendid marble balcony, which threw a long shadow on the water. Here she sat and watched the young prince, who thought himself all alone in the bright moonlight. 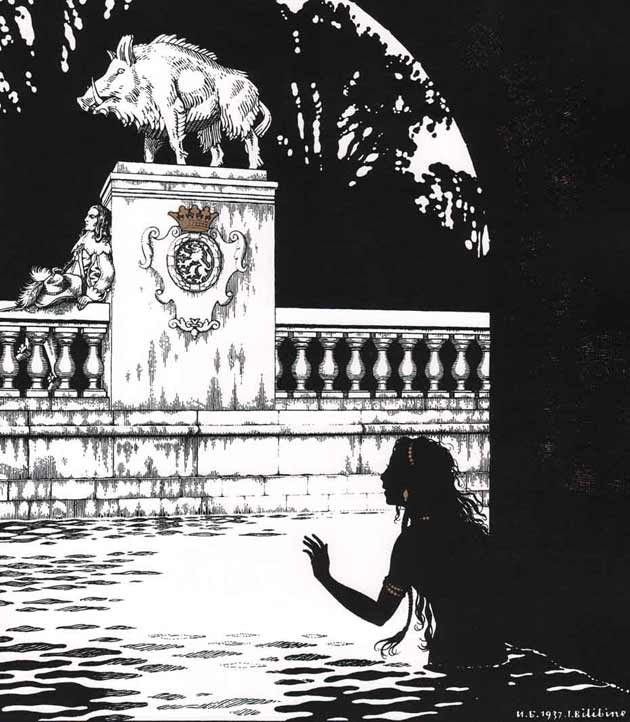 Many an evening she saw him sailing with music in his fine boat where flags were waving; she peeped up through the green reeds, and when the wind caught her silvery-white veil, and any one saw it, they thought it was a white swan lifting its wings.

Many a night when the fishermen lay with torches on the sea she heard them tell much good of the young prince; and she was happy that she had saved his life when he was drifting half dead on the waves; she thought how quietly his head had rested on her bosom, and how tenderly she had kissed him; but he knew nothing of it, and could not even dream of her.

More and more she began to love human beings, and more and more she wanted to rise up among them. Their world seemed far larger than her own. For they could fly over the sea in ships, and mount up the high hills far above the clouds, and the lands they owned stretched out in woods and fields farther than her eyes could reach. There was so much she wanted to know, but her sisters couldn’t answer all her questions; therefore she asked the old grandmother; and she was well acquainted with the “higher world” as she very rightly called the countries above the sea.

“If human beings are not drowned,” asked the little mermaid, “can they live forever? Don’t they die as we die down here in the sea?”

“Yes,” said the old lady. “They, too, must die, and their life is even shorter than ours. We can live to be three hundred years old, but when we no longer exist here, we become only foam on the water, and have not even a grave down here among those we love. We have no immortal soul; we never receive another life; we are like the green rushes that once cut through can never be green again. But human beings have a soul which lives forever, lives even after the body has turned to earth; it rises through the bright air up to all the shining stars. Just as we rise out of the water and see the human countries, so they rise up to lovely, unknown places, never to be seen by us.”

Másha went in the morning to fetch water, and saw at the door something wrapped in rags. When she touched the rags, there came from it the sound of ‘Ooah, ooah, ooah!’