“Why didn’t we get an immortal soul?” asked the little mermaid sorrowfully. “I would gladly give all the hundreds of years I have to live to be a human being only for one day, and later to come to the world of heaven.”

“You mustn’t be thinking about that,” said the old lady. “We’re much happier and much better off than the people up there.”

“I must die and float as foam on the sea, and not hear the music of the waves, and not see the pretty flowers and the red sun? Can I not do anything to win an immortal soul!”

“No!” answered the grandmother. “Only if a man were to love you so that you should be more to him than father or mother; if he should cling to you with his every thought and with all his love, and let the priest lay his right hand in yours with a promise of faithfulness here and in all eternity, then his soul would flow into your body, and you would receive a share of the happiness of mankind. He would give a soul to you and still keep his own. But that can never come to pass. The thing that’s so nice here in the sea—the fishtail—they would consider ugly on the earth: they don’t understand it; to be called beautiful there one must have two clumsy supports which they call legs.”

Then the little mermaid sighed, and looked mournfully at her fishtail.

“Let’s be happy!” said the old lady. “Let’s skip and jump in the three hundred years we have to live. That’s more than long enough, then afterward we can rest all the merrier in our graves. This evening we shall have a court ball.”

Such pomp as that was is never seen on earth. The walls and the ceiling of the big ballroom were of thick but transparent glass. Several hundreds of huge shells, rose pink and grass green, stood on each side in rows, filled with a blue fire which lit up the whole hall and shone through the walls, so that the sea outside was quite lit up; one could see all the innumerable fishes, big and small, swimming toward the glass walls; on some the scales gleamed purple, while in others they shone like silver and gold. Through the middle of the hall flowed a broad stream, and on this the mermen and mermaids danced to their own lovely songs. The people of the earth haven’t such beautiful voices. The little mermaid sang most sweetly of all, and everybody applauded her, and for a moment she felt joy in her heart, for she knew she had the loveliest voice of all in the sea or on the earth. But soon she thought again of the world above her; she could not forget the charming prince, or her sorrow at not having an immortal soul like his. Therefore she crept out of her father’s palace, and while song and gaiety went on inside, she sat sadly in her little garden. Then she heard the bugle horn sounding through the waters, and thought, “Now he must be sailing above, he whom I love more than father or mother, he on whom my wishes hang, and in whose hand I should like to lay my life’s happiness. I will dare everything to win him and an immortal soul. While my sisters dance in there in my father’s palace, I will go to the sea witch. I’ve always been so frightened of her, but perhaps she can counsel and help me.”

Now the little mermaid went out of her garden to the roaring whirlpools behind which the sea witch lived. She had never gone that way before. No flowers grew there, no sea grass; only the bare gray sand stretched out toward the whirlpools, where the water rushed round like roaring mill wheels and tore down everything it seized into the deep. In between these crushing whirls she had to walk to get into the domain of the sea witch; and for a long way there was no other road except one which led over warm bubbling mud: this the witch called her peat bog. Behind it lay her house in the midst of a weird wood, in which all the trees and bushes were polypes—half animals, half plants. They looked like hundred-headed snakes growing up out of the earth. All the branches were long slimy arms, with fingers like supple worms, and they moved joint by joint from the root to the farthest point; all that they could seize on in the water they held fast and never again let it go. The little mermaid stopped in front of them quite frightened; her heart beat with fear, and she was nearly turning back; but then she thought of the prince and the human soul, and her courage came back again. She bound her long fluttering hair closely around her head, so that the polypes might not seize it. She put her hands together on her breast, and then shot forward as a fish shoots through the water among the hideous polypes, who stretched out their supple arms and fingers after her. She saw that each of them held something it had seized with hundreds of little arms, like strong iron bands. People who had perished at sea and had sunk deep down peered out as white skeletons from the arms of the polypes; ships’ rudders and chests they also held fast, and skeletons of land animals, and a little mermaid whom they had caught and strangled; and this seemed to her the most terrible of all.

Now she came to a big slimy place in the wood, where fat water snakes rolled about, showing their ugly white and yellow bodies. In the middle of this place was a house built of white bones of shipwrecked men; there sat the sea witch feeding a toad out of her mouth, just as a person might feed a little canary bird with sugar. The horrid fat water snakes she called her little chickens and let them roll around on her large swampy breast. 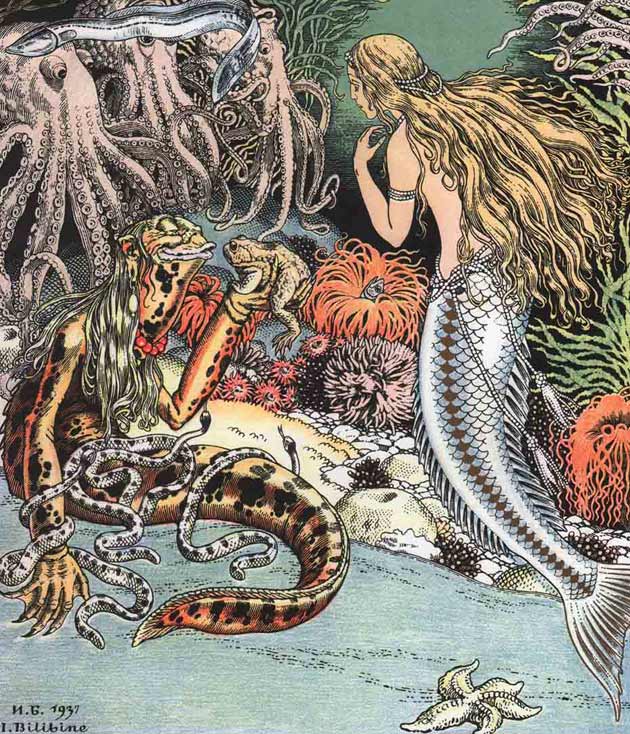 “I know what you want,” said the sea witch. “It is stupid of you, but you shall have your way, for it will get you in trouble, my little princess. You want to get rid of your fishtail, and to get two stumps instead of it, like those the people of the earth walk with, so that the young prince may fall in love with you, and you may get him and an immortal soul.” And with this the witch laughed loudly and disagreeably, so that the toad and the water snakes tumbled down to the ground, where they crawled about. “You come just in time,” said the witch, “to-morrow at the rise of the sun I could not help you until another year had gone by. I will make you a draught, with which you must swim to land to-morrow before the sun rises, and seat yourself there and drink it; then your tail will part in two and shrink in and become what the people of the earth call pretty legs, but it will hurt you—it will seem as if you were cut with a sharp sword. All who see you will say you are the loveliest daughter of man they ever saw. You will keep your graceful walk; no dancer will be able to move so lightly as you; but every step you take will be as if you trod upon sharp knives, and as if your blood must flow. If you will bear all this, I can help you.”

A Legend of Flowers

The children cried for honey, and the mothers took little bark baskets into the woods to search for the sweet food. But they returned with empty baskets.

‘Perhaps I can help thee, if thou wilt promise to give me the first thing that rubs itself against thy leg when thou art at home again, and to bring it here in twelve years' time, thou shalt have as much money as thou wilt.’