All were delighted, and especially the prince, who called her his little foundling; and she danced again and again, although every time she touched the earth it seemed as if she were treading on sharp knives. The prince said that she should always stay with him, and she received permission to sleep on a velvet cushion before his door. 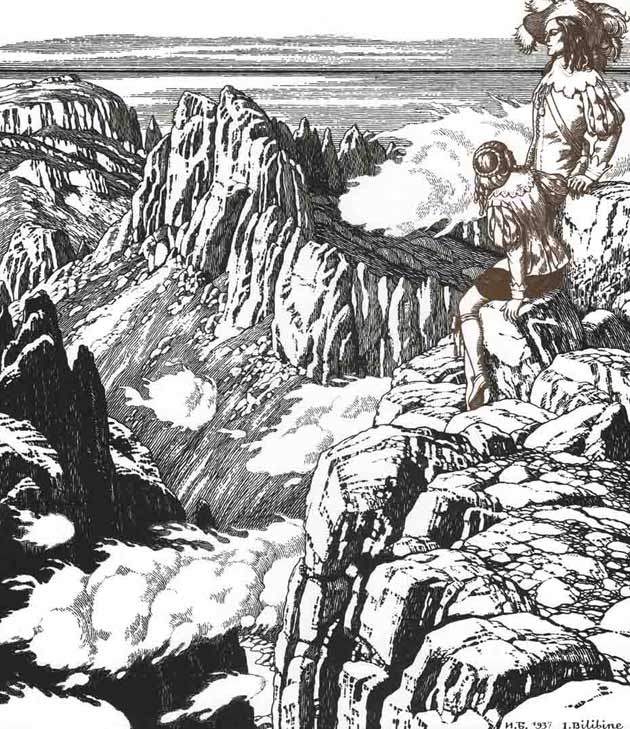 He had a page’s dress made for her, so that she could follow him on horseback. They rode through the fragrant woods, where the green boughs swept their shoulders and the little birds sang in the fresh leaves. She climbed with the prince up the high mountains, and although her delicate feet bled so that even the others could see it, she laughed at it herself, and followed him until they saw the clouds sailing beneath them like a flock of birds traveling to distant lands.

At home in the prince’s castle, when the others slept at night, she went out on the broad marble steps. It cooled her burning feet to stand in the cold sea water, and then she thought of those in the deep.

Once, in the nighttime, her sisters came arm in arm. They sang sadly as they swam over the water; and she beckoned to them, and they recognized her, and told her how she had grieved them all. Then they visited her every night; and once she saw far out her old grandmother, who had not been above the surface for many years, and the sea king with his crown on his head. They stretched out their hands toward her, but did not venture so near the land as her sisters.

Day by day the prince grew more fond of her. He loved her as one loves a dear, good child, but it never came into his head to make her his wife; and yet she must become his wife, or she would not receive an immortal soul, and would have to become foam on the sea on his wedding morning.

“Don’t you like me better than anybody else?” the eyes of the little mermaid seemed to say, when he took her in his arms and kissed her fair forehead.

“Yes, you are dearest to me!” said the prince, “for you have the best heart of them all. You are the most devoted to me, and you look like a young girl whom I once saw, but whom I certainly shall not find again. I was on board a ship which was wrecked. The waves threw me ashore near a holy temple, where several young girls performed the service. The youngest of them found me by the shore and saved my life. I only saw her twice: she was the only one in the world I could love; but you are so like her you almost take the place of her image in my soul. She belongs to the holy temple, and therefore my good fortune has sent you to me. We will never part!”

“Ah! he does not know that I saved his life,” thought the little mermaid. “I carried him over the sea to the wood where the temple stands. I sat there under the foam and looked to see if any one would come. I saw the beautiful girl whom he loves better than me.” And the mermaid sighed deeply—she could not weep. “The girl belongs to the holy temple,” he has said, “and will never come out into the world—they will meet no more. I am with him and see him every day; I will cherish him, love him, give up my life for him.”

But now they said that the prince was to marry, and that the beautiful daughter of a neighboring king was to be his wife, and that was why so splendid a ship was being fitted out. The story was, that the prince traveled to visit the land of the neighboring king, but that it was really done that he might see the king’s daughter. A great company was to go with him. The little mermaid shook her head and smiled; she knew the prince’s thoughts far better than any of the others.

“I must travel,” he had said to her. “I must see the beautiful princess: my parents desire it, but they do no wish to force me to bring her home as my bride. I cannot love her. She is not like the beautiful maiden in the temple, whom you are like. If I were to choose a bride, I would rather choose you, my dumb foundling with the speaking eyes.”

And he kissed her red lips and played with her long hair, and laid his head on her heart, so that it dreamed of happiness and of an immortal soul.

“You are not afraid of the sea, my dumb child?” said he when they stood on the splendid ship which was to carry him to the country of the neighboring king; and he told her of storm and calm, of strange fishes in the deep, and of what the divers had seen there. And she smiled at his tales, for she knew better than any one what there was at the bottom of the sea.

In the moon-clear night, when all were asleep, except the steersman who stood by the helm, she sat on the side of the ship gazing down through the clear water. She thought she saw her father’s palace. High on the battlements stood her old grandmother, with the silver crown on her head, and looked through the rushing tide up at the vessel’s keel. Then her sisters came up over the water, and looked mournfully at her and wrung their white hands. She waved at them, smiled, and wished to tell them that she was well and happy; but the cabin boy came near her, and her sisters dived down, so that he kept on thinking that the white he had seen was foam on the water.

The next morning the ship sailed into the harbor of the neighboring king’s splendid city. All the church bells were ringing, and from the high towers the trumpets were blown, while the soldiers stood with flying colors and flashing bayonets. Each day brought some festivity with it; balls and entertainments followed one another; but the princess was not yet there. People said she was being educated in a holy temple far away, where she was learning every royal virtue. At last she arrived.

This is why, if you find a child crying and ask the cause, you will often be told he is ‘crying for nothing.’

‘This small key belongs to one small room on the ground‑floor, and this you must not open, or you will repent it sore.’

Elves in Scotland: Dwellings and Mode of Life

Joy and mirth reign in such assemblies of the fairies; for they are particularly fond of dancing, and it is one of their chief occupations.