The little mermaid was anxious to see the beauty of the princess, and she had to acknowledge it. A lovelier being she had never seen. The princess’s skin was pure and clear, and behind the long dark eyelashes smiled a pair of faithful dark blue eyes.

“It is you,” said the prince, “you who saved me when I lay like a corpse on the shore!” and he folded his blushing bride to his heart. “Oh, I am too, too happy!” he said to the little mermaid. “What I never dared to hope is fulfilled. You will rejoice at my happiness, for you are the most devoted to me of them all!”

And the little mermaid kissed his hand; and it seemed already to her as if her heart was broken, for his wedding morning was to bring death to her, and change her into foam on the sea.

All the church bells were ringing, and heralds rode about the streets announcing the betrothal. On every altar fragrant oil was burning in costly silver lamps. The priests swung their censers, and bride and bridegroom laid hand in hand, and received the bishop’s blessing. In silk and gold the little mermaid held up the bride’s train; but her ears heard nothing of the festive music, her eyes did not see the holy ceremony; she thought of the night of her death, and of all she had lost in this world.

On the same evening the bride and bridegroom went on board the ship. The cannon roared, all the flags waved; in the midst of the ship a costly tent of gold and purple, with the most beautiful cushions, had been set up, and there the married pair were to sleep in the cool still night.

The sails swelled in the wind and the ship glided smoothly and lightly over the clear sea. When it grew dark, colored lamps were lighted and the sailors danced lively dances on deck. The little sea maid thought of the first time when she had risen up out of the sea, and had seen the same splendor and joy, and she whirled into the dance, hovering as the swallow hovers when it is pursued; and all shouted their admiration, never had she danced so marvelously. Her delicate feet were cut as if with sharp knives, but she did not feel it, for in her heart was a crueler cut. She knew this was the last evening on which she might see him for whom she had left her people and her home, had given up her beautiful voice, and had suffered unheard-of pains every day, while he was utterly unconscious of all. It was the last evening she might breathe the same air with him, and see the starry sky and the deep sea; and everlasting night without thought or dream awaited her, for she had no soul, and could win none. And everything was merriment and gladness on the ship till past midnight, and she laughed and danced with thoughts of death in her heart. The prince kissed his beautiful bride, and she played with his black hair, and hand in hand they went to rest in the splendid tent.

It became quiet on the ship; only the helmsman stood by the helm, and the little mermaid leaned her white arms on the bulwark and looked out toward the east for the morning dawn—the first ray, she knew, would kill her. Then she saw her sisters rising out of the sea; they were pale, like herself; their long beautiful hair no longer fluttered in the wind—it had been cut off. “We have given it to the witch, that she might bring you help, so that you may not die to-night. She has given us a knife; here it is—look! how sharp! Before the sun rises you must thrust it into the heart of the prince, and when the warm blood falls on your feet they will grow together again into a fishtail, and you will become a mermaid again, and come back to us, and live for three hundred years before you become dead salt sea foam. Hurry! He or you must die before the sun rises! Our old grandmother mourns so that her white hair has fallen off, as ours did under the witch’s scissors. Kill the prince and come back! Hurry! Do you see that red streak in the sky? In a few minutes the sun will rise, and you must die!”

And they gave a strange, deep sigh, and sank into the waves.

The little mermaid drew back the purple curtain from the tent, and saw the beautiful bride sleeping with her head on the prince’s breast; and she bent down and kissed his brow, and looked up to the sky where the morning red was gleaming brighter and brighter; then she looked at the sharp knife, and again fixed her eyes on the prince, who in his sleep murmured his bride’s name. Only she was in his thoughts, and the knife trembled in the mermaid’s hands. But then she flung it far away into the waves—they gleamed red where it fell, and it seemed as if drops of blood trickled up out of the water. Once more she looked with half-extinguished eyes upon the prince; then she threw herself from the ship into the sea, and felt her body dissolving into foam. 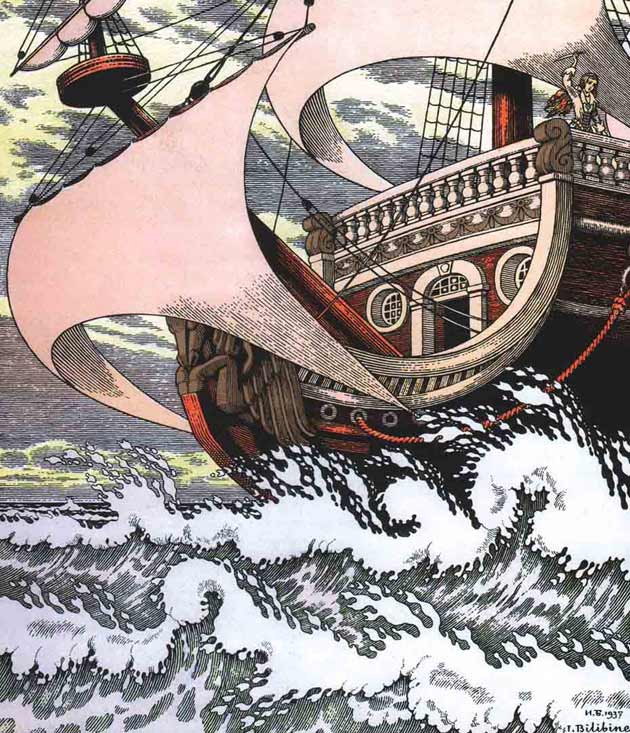 Now the sun rose up out of the sea. The rays fell mild and warm on the cold sea foam, and the little mermaid felt nothing of death. She saw the bright sun, and over her head hovered hundreds of lovely transparent beings; through them she could see the white sails of the ship and the red clouds of the sky; their speech was melody, but so spiritual that no human ear could hear it, just as no earthly eye could see them; without wings they floated through the air. The little mermaid found that she had a body like these, and was rising more and more out of the foam.

“To whom am I coming?” she asked, and her voice sounded like that of the other beings, so spiritual, that no earthly music could be compared to it.

The Story of Sir Bertrand

Sir Bertrand was now in total darkness; and, with his arms extended, began to ascend the stair-case. A dead cold hand met his left hand, and firmly grasped it, drawing him forcibly forward.