The Little Sister and Little Brother

Two orphans, little Sister Aliona and little Brother Ivan, were walking across a wide field by a long path, and it was hot and the heat tortured them.

The well was a long way off, the heat tortured them, and they reeked with perspiration. As they walked along they saw a pond, and around the pond a herd of cows was feeding.

“I want a drink,” said little Ivan. “Do not drink here, brother! If you do you will turn into a calf,” said Aliona.

“Oh, sister! If you only knew how thirsty I am!” he cried.

“Do not drink, brother! If you should, you would become a little colt,” she answered. 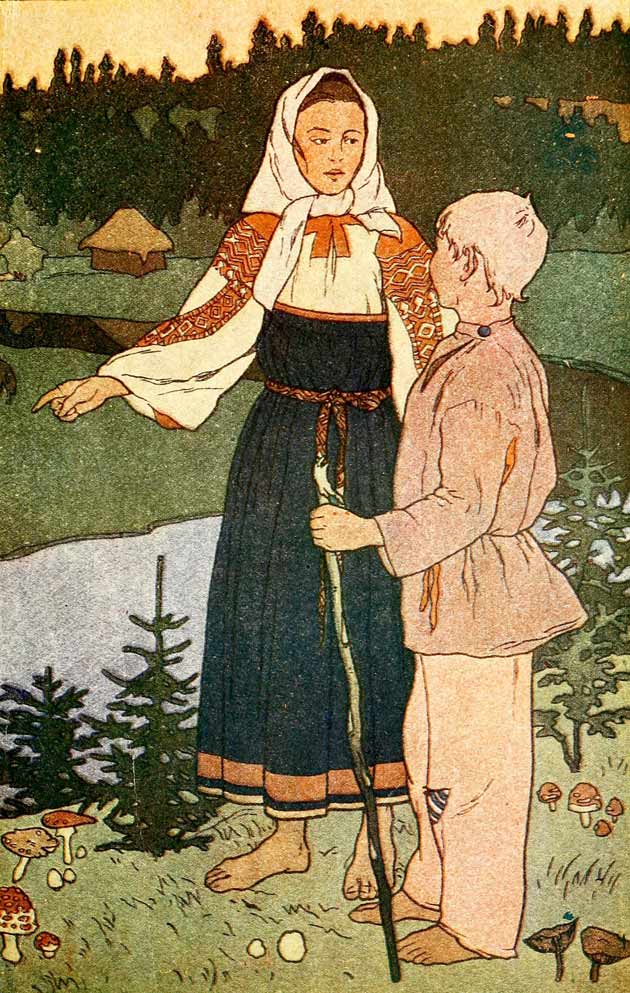 Do not drink, brother! If you should, you would become a little colt.

“Oh, sister! I am terribly thirsty!” he said again.

“Do not drink, brother! If you do you will turn into a lamb,” she replied.

“Oh, sister!” he pleaded. “I must have a drink. I am terribly thirsty.”

“Do not drink, brother! If you do you will become a pig.”

Again little Ivan heeded what she said and they went on. They walked and they walked, and they saw a herd of goats grazing near some water.

“Oh, sister! I must have a drink!” he said earnestly.

“Do not drink, brother!” she besought. “If you do you will turn into a kid!”

But he could no longer restrain himself, and he disobeyed his sister. He took a drink and instantly was changed into a Kid, running and gambolling in front of his sister and crying, “Baa! baa!”

Aliona suspected that it was her brother. She sat down in the shade of a hayrick and burst into bitter tears, but the Kid ran about on the grass near her. She tied a silken scarf around him and led him along with her, and she wept, bitterly she wept.

The Kid ran and ran and finally ran into the garden of a certain Tsar. The men perceived it and immediately called the Tsar’s attention to it.

“Your majesty,” they said, “a Kid has just run into our garden, and a girl has him by a girdle, and she is such a beauty!”

Find stories similar to The Little Sister and Little Brother

My favourite green, the grass's hue, and the fine deep violet-blue, nd the pretty pale blue-bell, and the rose I love so well.

It was not long before some one knocked at the house-door and cried, ‘Open the door, dear children; your mother is here, and has brought something back with her for each of you.’

The Lion, finding the insect would not be brushed away, was fain to accept the challenge; so to it they went.