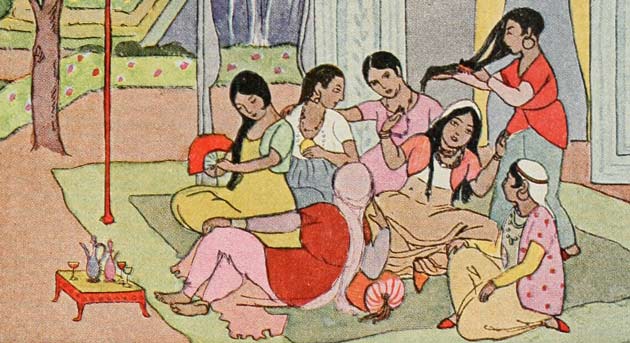 In India there once lived a sister and seven brothers. The brothers were all married, and their wives were older and stronger than the sister, but nevertheless this one poor little girl had all the cooking, cleaning, and serving to do for all seven brothers and all their seven wives as well.

Even this would not have been so hard to endure if they had been kind to her. But her brothers cared nothing for her, for she was only a girl; and her brothers’ wives hated her—all the more, because she worked so hard for them and yet never complained.

“Why cannot the stupid thing say something, at least, when I slap her?” cried the oldest wife.

“Isn’t it vexing,” sighed the second wife, “to have to endure such patience? I am fairly sick from it.”

Then the third wife, the big, fat one, burst into tears, and sobbed, “You don’t know what I suffer at her hands! Why, just this morning, when I pinched her for letting my rice get cold, all she could do was to smile and say, ‘I am so sorry.’ Why, you have no idea how nervous I am getting from such things.”

So one and all decided that they really could not stand her any more, and would have to find some way to get rid of her before they all became ill because of her and her ways.

“Couldn’t we push her into the well?” asked wife number four.

“Better put a cobra into her bed, to bite her,” said the fifth wife.

“No, that wouldn’t do, for it might bite us,” said number six.

Then little number seven, with the big, big eyes, squealed, “Oh, I know! I know what to do! We must set the Bonga on her.”

Then some one said, “Ssh! Ssh!” and all else was spoken in whispers.

That noon when the little sister went to the well to draw water it dried up before her eyes. “Oh, what evil thing have I done, that the water should dry up before my eyes?” she cried. 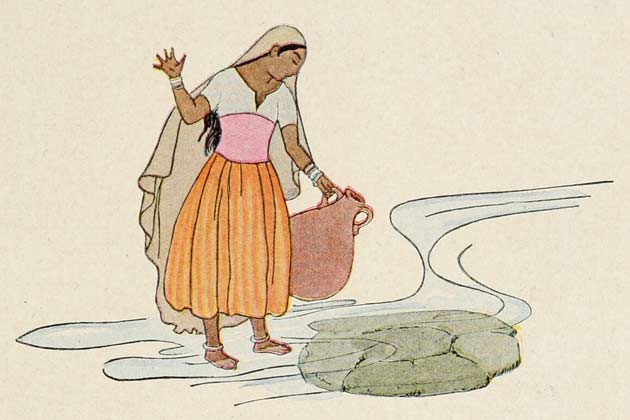 No sooner had she said this than the water slowly began to rise again. When it had risen to her ankles she tried to fill her pitcher, but it would not go under the water.

The pitcher filled with water and sank, and with it sank the little sister, and was drowned. Then the Bonga changed her into a Bonga like himself, and carried her off.

A tall bamboo growing near a spring now became her home. The bamboo grew and grew, until it was much larger than any of the others around the spring. A Yogi saw it, and said to himself, “I’ll cut down that huge bamboo and make a fine fiddle of it.”

So he started to cut it with his ax, close to the root, but the bamboo called out, “Don’t cut me at the root! Cut higher up!”

He started to cut the bamboo near the top, but the top cried out, “Don’t cut me near the top! Cut lower down!”

At that the Yogi became angry and cut the tree down near the root and made a fine fiddle out of it. It was a wonderful fiddle, and when any one played on it all who heard the music said, “That sounds just like a girl singing!” and all who heard it longed to hear it again.