In Yedo there dwelt a samurai called Hagiwara. He was a samurai of the hatamoto, which is of all the ranks of samurai the most honourable. He possessed a noble figure and a very beautiful face, and was beloved of many a lady of Yedo, both openly and in secret. For himself, being yet very young, his thoughts turned to pleasure rather than to love, and morning, noon and night he was wont to disport himself with the gay youth of the city. He was the prince and leader of joyous revels within doors and without, and would often parade the streets for long together with bands of his boon companions.

One bright and wintry day during the Festival of the New Year he found himself with a company of laughing youths and maidens playing at battledore and shuttlecock. He had wandered far away from his own quarter of the city, and was now in a suburb quite the other side of Yedo, where the streets were empty, more or less, and the quiet houses stood in gardens. Hagiwara wielded his heavy battledore with great skill and grace, catching the gilded shuttlecock and tossing it lightly into the air; but at length with a careless or an ill-judged stroke, he sent it flying over the heads of the players, and over the bamboo fence of a garden near by. Immediately he started after it. Then his companions cried, “Stay, Hagiwara; here we have more than a dozen shuttlecocks.”

“Nay,” he said, “but this was dove-coloured and gilded.”

“Foolish one!” answered his friends; “here we have six shuttlecocks all dove-coloured and gilded.”

But he paid them no heed, for he had become full of a very strange desire for the shuttlecock he had lost. He scaled the bamboo fence and dropped into the garden which was upon the farther side. Now he had marked the very spot where the shuttlecock should have fallen, but it was not there; so he searched along the foot of the bamboo fence—but no, he could not find it. Up and down he went, beating the bushes with his battledore, his eyes on the ground, drawing breath heavily as if he had lost his dearest treasure. His friends called him, but he did not come, and they grew tired and went to their own homes. The light of day began to fail. Hagiwara, the samurai, looked up and saw a girl standing a few yards away from him. She beckoned him with her right hand, and in her left she held a gilded shuttlecock with dove-coloured feathers.

The samurai shouted joyfully and ran forward. Then the girl drew away from him, still beckoning him with the right hand. The shuttlecock lured him, and he followed. So they went, the two of them, till they came to the house that was in the garden, and three stone steps that led up to it. Beside the lowest step there grew a plum tree in blossom, and upon the highest step there stood a fair and very young lady. She was most splendidly attired in robes of high festival. Her kimono was of water-blue silk, with sleeves of ceremony so long that they touched the ground; her under-dress was scarlet, and her great girdle of brocade was stiff and heavy with gold. In her hair were pins of gold and tortoiseshell and coral. 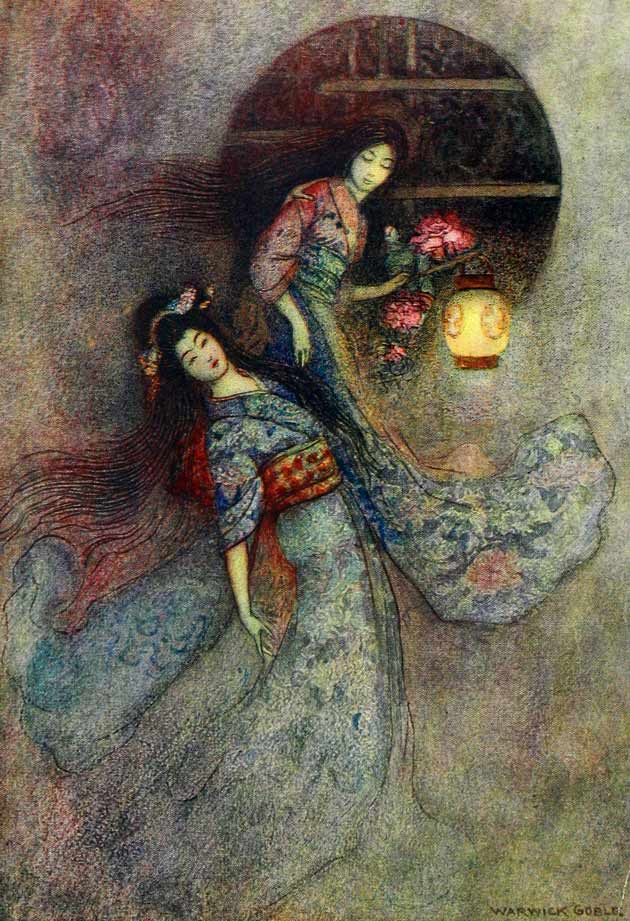 When Hagiwara saw the lady, he knelt down forthwith and made her due obeisance, till his forehead touched the ground.

So the samurai went in, and they brought him to a room of ten mats, where they entertained him; for the Lady of the Morning Dew danced before him in the ancient manner, whilst O’Yoné, the handmaiden, beat upon a small scarlet-tasselled drum.

Afterwards they set food before him, the red rice of the festival and sweet warm wine, and he ate and drank of the food they gave him. It was dark night when Hagiwara took his leave. “Come again, honourable lord, come again,” said O’Yoné the handmaiden.

“Yea, lord, you needs must come,” whispered the Lady of the Morning Dew.

The lady stiffened, and her child’s face grew grey, but she laid her hand upon Hagiwara’s shoulder.

“Then,” she said, “it will be death, lord. Death it will be for you and for me. There is no other way.” O’Yoné shuddered and hid her eyes with her sleeve.

The samurai went out into the night, being very much afraid.

Long, long he sought for his home and could not find it, wandering in the black darkness from end to end of the sleeping city. When at last he reached his familiar door the late dawn was almost come, and wearily he threw himself upon his bed. Then he laughed. “After all, I have left behind me my shuttlecock,” said Hagiwara the samurai.

The next day Hagiwara sat alone in his house from morning till evening. He had his hands before him; and he thought, but did nothing more. At the end of the time he said, “It is a joke that a couple of geisha have sought to play on me. Excellent, in faith, but they shall not have me!” So he dressed himself in his best and went forth to join his friends. For five or six days he was at joustings and junketings, the gayest of the gay. His wit was ready, his spirits were wild.

Then he said, “By the gods, I am deathly sick of this,” and took to walking the streets of Yedo alone. From end to end of the great city he went. He wandered by day and he wandered by night, by street and alley he went, by hill and moat and castle wall, but he found not what he sought. He could not come upon the garden where his shuttlecock was lost, nor yet upon the Lady of the Morning Dew. His spirit had no rest. He fell sick and took to his bed, where he neither ate nor slept, but grew spectre-thin. This was about the third month. In the sixth month, at the time of niubai, the hot and rainy season, he rose up, and, in spite of all his faithful servant could say or do to dissuade him, he wrapped a loose summer robe about him and at once went forth.

“Alack! Alack!” cried the servant, “the youth has the fever, or he is perchance mad.”

Hagiwara faltered not at all. He looked neither to the right nor to the left. Straight forward he went, for he said to himself, “All roads lead past my love’s house.” Soon he came to a quiet suburb, and to a certain house whose garden had a split bamboo fence. Hagiwara laughed softly and scaled the fence.

A thick fog concealed the road, and confused his senses. Every stone was, in the farmer's eyes, as large as a mountain; every little brook seemed to flow in an opposite direction.

Clothed in the Lion's skin, the young Ass strutted forth believing himself a very Lion, and causing men to flee before him in terror.

The History of Jack Jingle

Jack ran away crying as loud as he could, ‘A Shilling! a penny! a halfpenny! and a plumcake! Huzza!’ till he came to his father's cottage.

The two travelers in their pockets, and could not believe their eyes when they saw that they were not filled with coals, but with pure gold.