Then he went off to find the tree where Maruda, the old woman’s daughter, was waiting for the dragon. She could not believe her eyes when the Prince came up to her and cut her bonds. She told him that she was quite ready to be sacrificed so that her mother and all the starving people might have water for their crops, but the Prince assured her that it would be the dragon who would be sacrificed this time, and she was to go to a little hill where she could stay in safety and watch the death of the dragon.

Just then, a terrible roar was heard, increasing in volume until the whole earth seemed to shake with the din. Maruda made haste to get to the hill, and no sooner was she safe at the top, than the dragon appeared rising at a great rate through the water of the well which the tree shaded. But the Prince was ready with his trusty sword, and before the dragon could pop its head out, the Prince was at the well, and as the dragon leaped out the Prince cut him in half, casting each part of the dragon clear away from the well so that the water should be unspoiled.

Directly the dragon was slain, the water gushed and gurgled and overflowed from the well, and a great sound of rising water was heard everywhere, and every fountain and cistern and basin and pond and brook became full of sweet, clear water, enough for all.

The King and his councillors and army were all assembled on the city walls, for news had come that the Prince was to fight the dragon and all expected the presumptuous stranger to be slain. But instead of being slain, there was the Prince walking off with Maruda, and the dragon in two pieces, and the water at last let free for every one. Instead of being pleased, as you might have expected, the King and his councillors and his army were actually annoyed that a stranger should have done what they could not do; therefore with one accord they cried, “Let us turn this presumptuous madman out of the country,” and started off to the old woman’s cottage where the Prince had taken Maruda.

The Prince was there, of course, telling the old woman that no thanks were due to him.

“If you had not come to my assistance with that cake of bread,” said he, “I should never have had the strength to slay the dragon, so the credit is really yours.”

Just at that moment they heard the angry noise of people coming on an evil errand, and looking out of the window, they saw this great crowd of the King, his councillors and army, advancing over the plain, all with their swords held out, ready to slay the Prince. Then the old woman and Maruda began to weep with fear, but the Prince turned to the eagle and said, “Can you not help us, now your mistress who has fed you all these years is in need?”

“Certainly,” said the eagle. “You shall all get on my back and I will carry you out of the Nether World; but it will be a long, long journey and we shall need food and water.”

“Take me,” said the buffalo, “I will readily give myself for this escape. My hide will form a fine bag for the water and my flesh will give a-plenty of meat.”

Hence, in a remarkably short time, provision for their journey was obtained and the little party mounted on the back of the great eagle who flew swiftly up into the air just as the enraged crowd arrived at the cottage.

The eagle flew for many days, up and up through the darkness and then across the great clouds of mist which finally turned into sea. They drank from the water in the buffalo hide and ate the buffalo meat, but at last their store was exhausted and the eagle began to fly more slowly.

“Now he is of the first importance,” said the Prince, “and you come next; I must be the first to suffer.” Saying this he gave his arm to the eagle and told him to eat from it; and in this way the eagle was enabled to continue the journey until it landed them on the top of a mountain overlooking the Prince’s home.

How glorious it was to see the light of the sun again and to look down upon the castle of his father. But before the Prince went down the mountain side the eagle gave him a golden feather from its tail and told him if the Prince were in need of the eagle’s help again, the Prince was to burn the feather, and the eagle would smell the scent and come.

Off went the Prince, therefore, with the old woman and Maruda, and wretchedly thin and tattered he looked, with his poor arms torn where he had given his flesh to the eagle. But he had a cheerful courage still and consoled the old woman and Maruda for all that they had suffered, by saying what a hearty welcome awaited all in the castle, and how overjoyed his father and mother would be to see him again.

But when he came up to the terrace steps with his companions, no one knew him. Instead, all stared with cold eyes at his tattered clothes and wounded arms, and when he came into the hall where his father and mother sat and went forward, he saw his own father did not recognise him, either.

When he told his story, the King shook his head and said his son had disappeared years ago and the Prince must be an impostor. Wretched was the Prince, for it seemed as if he would be turned out of his own home; when suddenly there was a stir among the courtiers and his mother the Queen passed between them. She had heard that a strange man had come to the palace claiming to be the missing Prince, and directly she set eyes on the Prince, for all his rags and wounds and thinness, she cried out, “This is our son whom we thought lost,” and rushed forward to weep over him and embrace him.

The heart of a mother is never mistaken. The Prince’s sad plight which blinded his father, the King, who remembered a dashing, handsome young prince, could not hide her child from his mother. 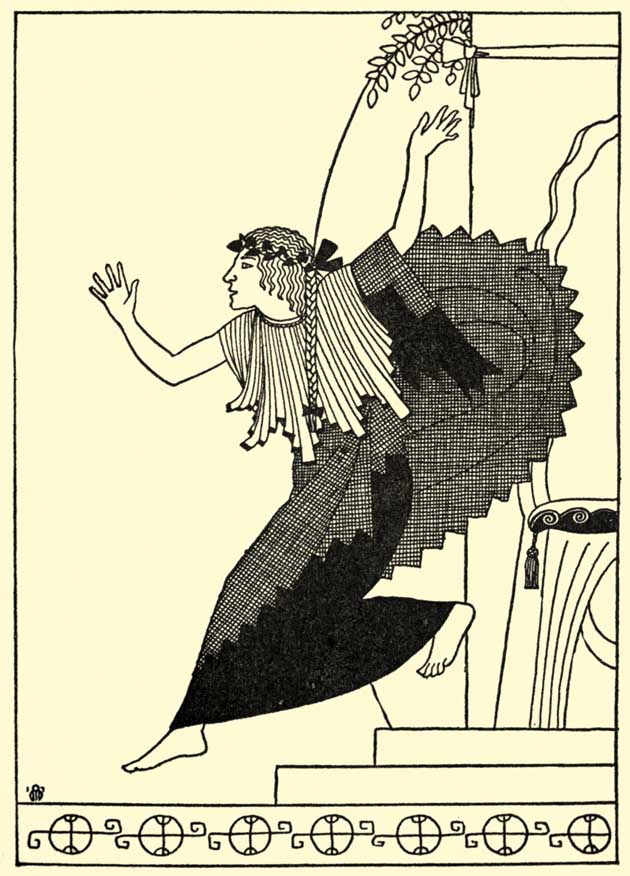 “This is our son whom we thought lost,” cried his mother.

She begged the King to hear his story, but the King could not believe this beggar in tatters could be his son; he sent for his other two sons to hear the story and they said they had never heard of such a place as the Nether World, nor of the creature the Prince called a dragon, and if it had been as large as the Prince described, they were sure the Prince could never have slain it.

From Wonder Tales of the World, Constance Armfield,New York: Harcourt, Brace and Howe, 1920.

Find stories similar to The Prince and the Eagle

‘Beauty, did you come here willingly to die in place of your father?’ ‘Willingly,’ she answered.

The First Summer in the New World

One day the Ground Hog and the Badger and the Mole came to the Great White Rabbit. ‘Manabozho,’ they said, ‘we keep making burrows for ourselves in the ground, and hiding there away from the Sun. Why is this?’

See Slovenly Peter! Here he stands, with his dirty hair and hands.