At this, however, the Prince remembered his feather, and plucking it from his bosom, threw it on the pan of charcoal which burned beside the throne. Instantly a cloud of most delicious perfume ascended and rolled out through the doorway across the terrace toward the mountain where the eagle lived.

Then all present saw what looked to be a golden cloud rise from the top of the mountain and hover in the sky, coming nearer and nearer, until with a great rush the Golden Eagle came down to the terrace. But instead of halting, it flew into the hall to the Prince, and placing its beak against his arm restored first one muscle and then the other, so that the Prince held out his arms whole and strong. 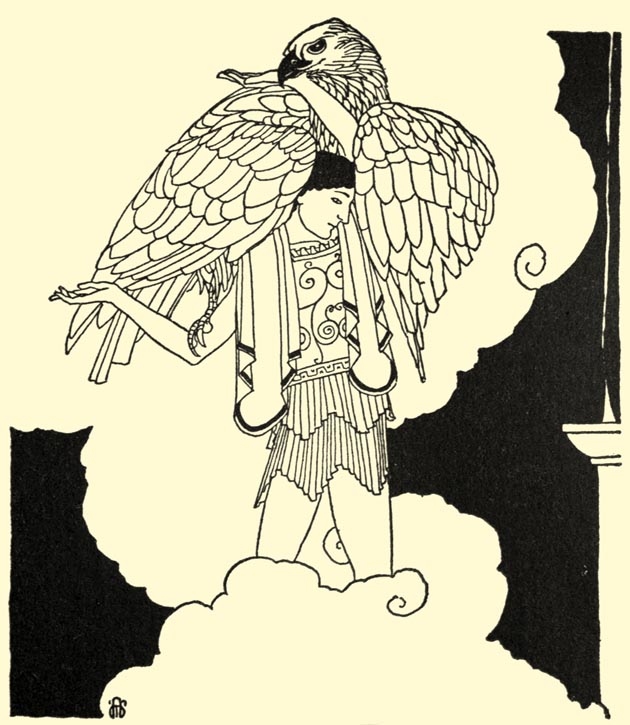 Placing its beak against his arm, restored first one muscle and then the other.

This proved without question that his story was true, and the King embraced his son and begged his other sons to be taken away and imprisoned for having thrust their brother down the well. But the Prince fell on his knees before the King and begged their forgiveness.

“The ill they would have done me has turned out well for many,” said he. “Had they not thrust me down the well, I could never have restored the water to all those poor, starving people, and rescued Maruda and brought her again to her mother. Now I have only to ask that you will grant Maruda and her mother a home in your kingdom where they may live in peace and safety; and so that they may be sure of plenty of water, I ask that a cottage may be built beside the well in the forest.

From Wonder Tales of the World, Constance Armfield,New York: Harcourt, Brace and Howe, 1920.

Find stories similar to The Prince and the Eagle

The soldier drew his great bow and let an arrow fly at the monster’s head. He never missed his aim, and the arrow struck the ugly head of the centipede, but bounced away.

The Evergreen Tree and the Wilderness Marigold

These people take our flowers home. Some of us they put in baskets and call basket flowers. Some they put in the maidens’ hair and they call us maiden flowers.