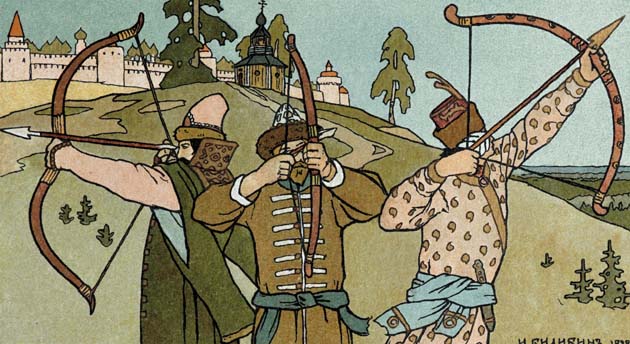 In an old, old Russian tsarstvo, I do not know when, there lived a sovereign prince with the princess his wife. They had three sons, all of them young, and such brave fellows that no pen could describe them. The youngest had the name of Ivan Tsarevitch. One day their father said to his sons:

“My dear boys, take each of you an arrow, draw your strong bow and let your arrow fly; in whatever court it falls, in that court there will be a wife for you.”

The arrow of the oldest Tsarevitch fell on a boyar-house just in front of the terem where women live; the arrow of the second Tsarevitch flew to the red porch of a rich merchant, and on the porch there stood a sweet girl, the merchant’s daughter. The youngest, the brave Tsarevitch Ivan, had the ill luck to send his arrow into the midst of a swamp, where it was caught by a croaking frog. 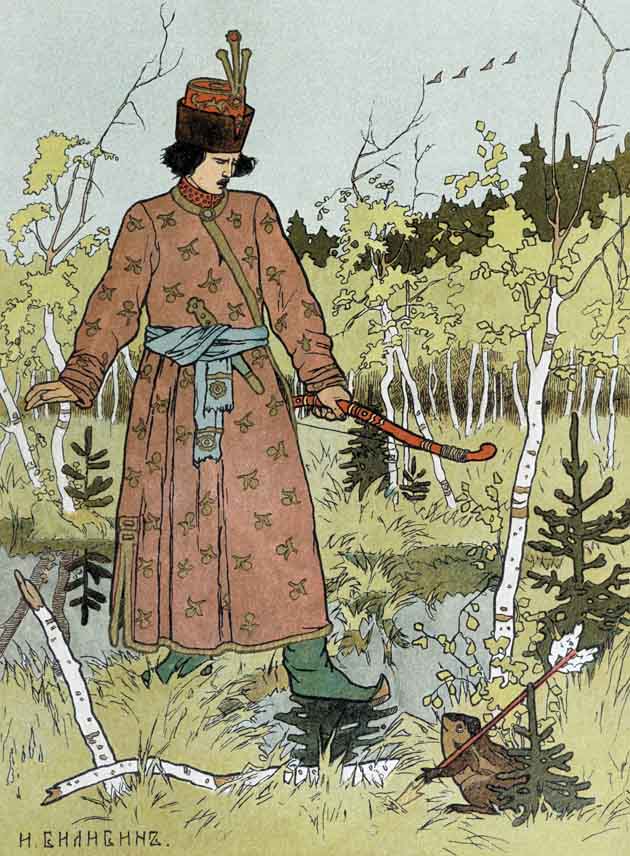 Ivan Tsarevitch came to his father: “How can I marry the frog?” complained the son. “Is she my equal? Certainly she is not.”

“Never mind,” replied his father, “you have to marry the frog, for such is evidently your destiny.”

Thus the brothers were married: the oldest to a young boyarishnia, a noble-man’s child; the second to the merchant’s beautiful daughter, and the youngest, Tsarevitch Ivan, to a croaking frog.

After a while the sovereign prince called his three sons and said to them:

“Have each of your wives bake a loaf of bread by to-morrow morning.”

Ivan returned home. There was no smile on his face, and his brow was clouded.

“C-R-O-A-K! C-R-O-A-K! Dear husband of mine, Tsarevitch Ivan, why so sad?” gently asked the frog. “Was there anything disagreeable in the palace?”

“Disagreeable indeed,” answered Ivan Tsarevitch; “the Tsar, my father, wants you to bake a loaf of white bread by to-morrow.”

“Do not worry, Tsarevitch. Go to bed; the morning hour is a better adviser than the dark evening.”

The Tsarevitch, taking his wife’s advice, went to sleep. Then the frog threw off her frogskin and turned into a beautiful, sweet girl, Vassilissa by name. She now stepped out on the porch and called aloud:

“Nurses and waitresses, come to me at once and prepare a loaf of white bread for to-morrow morning, a loaf exactly like those I used to eat in my royal father’s palace.”

In the morning Tsarevitch Ivan awoke with the crowing cocks, and you know the cocks and chickens are never late. Yet the loaf was already made, and so fine it was that nobody could even describe it, for only in fairyland one finds such marvelous loaves. It was adorned all about with pretty figures, with towns and fortresses on each side, and within it was white as snow and light as a feather. 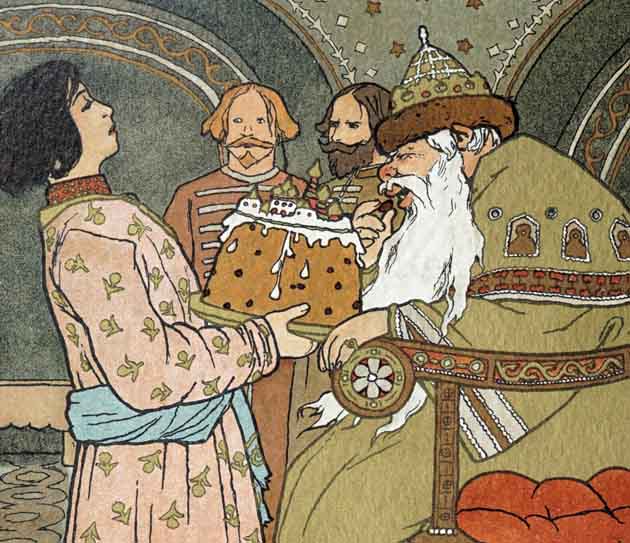 The Tsar father was pleased and the Tsarevitch received his special thanks.

“Now there is another task,” said the Tsar smilingly. “Have each of your wives weave a rug by to-morrow.”

Tsarevitch Ivan came back to his home. There was no smile on his face and his brow was clouded.

“C-R-O-A-K! C-R-O-A-K! Dear Tsarevitch Ivan, my husband and master, why so troubled again? Was not father pleased?”

“How can I be otherwise? The Tsar, my father, has ordered a rug by to-morrow.”

“Do not worry, Tsarevitch. Go to bed; go to sleep. The morning hour will bring help.”

Again the frog turned into Vassilissa, the wise maiden, and again she called aloud:

“Dear nurses and faithful waitresses, come to me for new work. Weave a silk rug like the one I used to sit upon in the palace of the king, my father.”

Once said, quickly done. When the cocks began their early “cock-a-doodle-doo,” Tsarevitch Ivan awoke, and lo! there lay the most beautiful silk rug before him, a rug that no one could begin to describe. Threads of silver and gold were interwoven among bright-colored silken ones, and the rug was too beautiful for anything but to admire.