Ivan Tsarevitch thanked the good old man, and followed his new guide, the ball. Long, very long, was his road. One day in a wide, flowery field he met a bear, a big Russian bear. Ivan Tsarevitch took his bow and was ready to shoot the bear.

“Do not kill me, kind Tsarevitch,” said the bear. “Who knows but that I may be useful to thee?” And Ivan did not shoot the bear.

Above in the sunny air there flew a duck, a lovely white duck. Again the Tsarevitch drew his bow to shoot it. But the duck said to him:

“Do not kill me, good Tsarevitch. I certainly shall be useful to thee some day.”

And this time he obeyed the command of the duck and passed by. Continuing his way he saw a blinking hare. The Tsarevitch prepared an arrow to shoot it, but the gray, blinking hare said:

“Do not kill me, brave Tsarevitch. I shall prove myself grateful to thee in a very short time.”

The Tsarevitch did not shoot the hare, but passed by. He walked farther and farther after the rolling ball, and came to the deep blue sea. On the sand there lay a fish. I do not remember the name of the fish, but it was a big fish, almost dying on the dry sand. 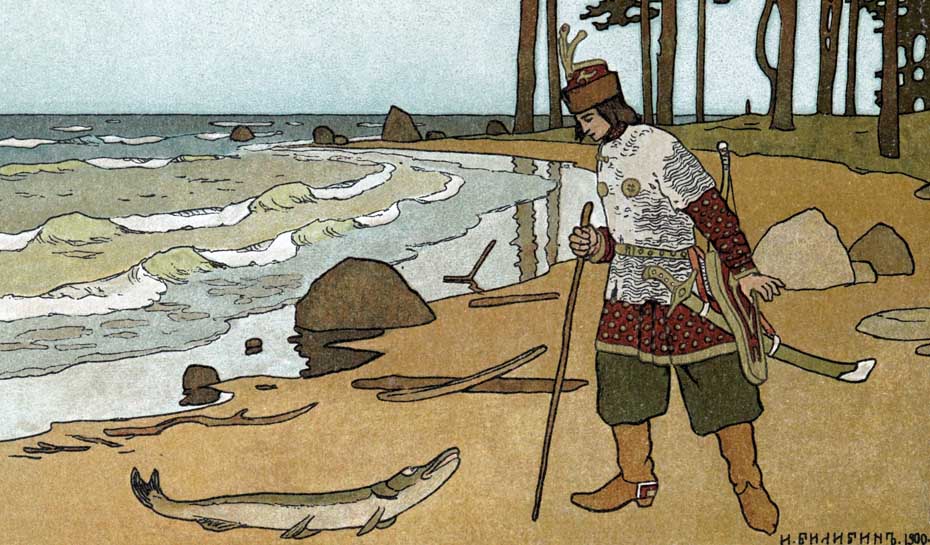 “O Tsarevitch Ivan!” prayed the fish, “have mercy upon me and push me back into the cool sea.”

The Tsarevitch did so, and walked along the shore. The ball, rolling all the time, brought Ivan to a hut, a queer, tiny hut standing on tiny hen’s feet.

“Izboushka! Izboushka!”—for so in Russia do they name small huts—“Izboushka, I want thee to turn thy front to me,” cried Ivan, and lo! the tiny hut turned its front at once. Ivan stepped in and saw a witch, one of the ugliest witches he could imagine.

“Ho! Ivan Tsarevitch! What brings thee here?” was his greeting from the witch.

“O, thou old mischief!” shouted Ivan with anger. “Is it the way in holy Russia to ask questions before the tired guest gets something to eat, something to drink, and some hot water to wash the dust off?”

Baba Yaga, the witch, gave the Tsarevitch plenty to eat and drink, besides hot water to wash the dust off. Tsarevitch Ivan felt refreshed. Soon he became talkative, and related the wonderful story of his marriage. He told how he had lost his dear wife, and that his only desire was to find her.

“I know all about it,” answered the witch. “She is now at the palace of Kostshei the Deathless, and thou must understand that Kostshei is terrible. He watches her day and night and no one can ever conquer him. His death depends on a magic needle. That needle is within a hare; that hare is within a large trunk; that trunk is hidden in the branches of an old oak tree; and that oak tree is watched by Kostshei as closely as Vassilissa herself, which means closer than any treasure he has.”

Then the witch told Ivan Tsarevitch how and where to find the oak tree. Ivan hastily went to the place. But when he perceived the oak tree he was much discouraged, not knowing what to do or how to begin the work. Lo and behold! that old acquaintance of his, the Russian bear, came running along, approached the tree, uprooted it, and the trunk fell and broke. A hare jumped out of the trunk and began to run fast; but another hare, Ivan’s friend, came running after, caught it and tore it to pieces. Out of the hare there flew a duck, a gray one which flew very high and was almost invisible, but the beautiful white duck followed the bird and struck its gray enemy, which lost an egg. That egg fell into the deep sea. Ivan meanwhile was anxiously watching his faithful friends helping him. But when the egg disappeared in the blue waters he could not help weeping. All of a sudden a big fish came swimming up, the same fish he had saved, and brought the egg in his mouth. How happy Ivan was when he took it! He broke it and found the needle inside, the magic needle upon which everything depended.

At the same moment Kostshei lost his strength and power forever. Ivan Tsarevitch entered his vast dominions, killed him with the magic needle, and in one of the palaces found his own dear wife, his beautiful Vassilissa. He took her home and they were very happy ever after. 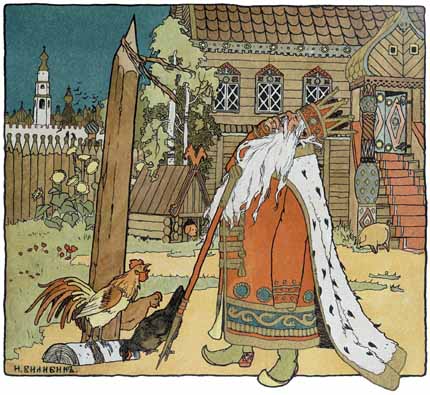 I looked, and saw two wolves running through the field: one was full-grown, and the other a whelp. The whelp was carrying a dead lamb on his shoulders, and holding on to one of its legs with its teeth.

When Ványa saw the smoke rolling out of the vestibule, he ran to the door, made his way through the smoke into the house, and began to waken his grandmother, but she was dazed from her sleep.

The magician threw on the fire a powder he had about him, at the same time saying some magical words. The earth trembled and opened in front of them, disclosing a square flat stone with a brass ring in the middle to raise it by.