The Welsh Pwcca is evidently the same as the English Puck, and is known in some parts of the principality by the name of Bwcci. In Breconshire a whole glen bears his name, Cwm Pwcca; and it is traditionally said, that from this spot Shakspeare drew some of his materials for the Midsummer Night’s Dream, through the medium of his friend Richard, the son of Sir John Price of the priory of Brecon.

Cwm Pwcca, or the Pwcca’s Valley, forms part of the deep and romantic glen of the Clydach, which, before the establishment of the iron-works of Messrs. Frere and Powell, was one of the most secluded spots in Wales, and therefore well calculated for the haunt of goblins and fairies. But the bustle of a manufactory has now in a great measure scared these beings away; and of late it is very rarely that any of its former inhabitants, the Pwccas, are seen. Such, however, is the attachment to their ancient haunt, that they have not entirely deserted it; as there was lately living near this valley a man who used to assert that he had seen one, and had a narrow escape of losing his life, through the maliciousness of the goblin.

As he was one night returning home over the mountain from his work, he perceived at some distance before him a light, which seemed to proceed from a candle in a lantern, and upon looking more attentively, he saw what he took to be a human figure carrying it, which he concluded to be one of his neighbours likewise returning from his work.

As he perceived that the figure was going the same way with himself, he quickened his pace in order that he might overtake him, and have the benefit of his light to descend the steep and rocky path which led into the valley; but he rather wondered that such a short person as appeared to carry the lantern should be able to walk so fast. However, he redoubled his exertions, determined to come up with him; and although he had some misgivings that he was not going along the usual track, yet he thought that the man with the lantern must know better than himself, and he followed the direction taken by him without farther hesitation.

Having, by dint of hard walking, overtaken him, he suddenly found himself on the brink of one of the tremendous precipices of Cwm Pwcca, down which another step would have carried him headlong into the roaring torrent beneath. And, to complete his consternation, at the very instant he stopped, the little fellow with the lantern made a spring right across the glen to the opposite side, and there, holding up the light above his head, turned round and uttered with all his might a loud and most malicious laugh; upon which he blew out his candle, and disappeared up the opposite hill1. 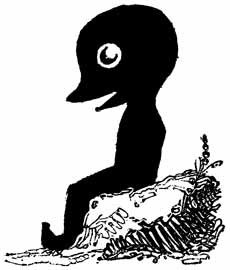 1. A Welsh peasant, well acquainted with Cwm Pwcca and its supernatural inhabitants, was requested to describe their form; he accordingly made a sketch, of which this wood-cut is a reduced fac-simile.