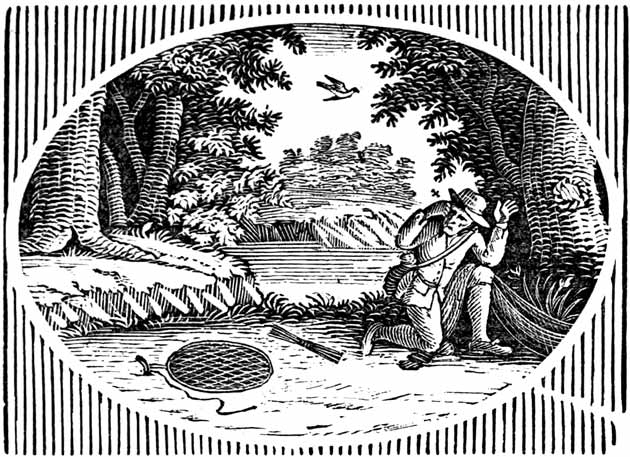 “I‘m Convinced that I laid Five Eggs,” said a disconsolate Hen-Sparrow, as she looked Ruefully into her Nest.

“Where have you Been?” enquired her Mate.

“Only a little way Along the Road,” answered the Hen.

“You’ve been Gadding About,” said her Mate sharply, “What Right have you to Leave your Nest at all?”

“Oh!” gasped the Hen, “Just Hear him!” Then every individual feather she Possessed turned the Wrong Way, and she said hotly, “When you Flew out this morning you said you would not be Ten Minutes, and now—look at the Sun. What Time do you make it out to be, Mr. Sparrow?”

“Yes, two o’clock, and you Left Home at Eleven.” Here the little Hen stamped her Claw with Passion, and the Cock-Sparrow hung his head, as Well he Might.

“Gadding About,” piped the lady Furiously, gradually working Herself into Hysterics. “Gadding about Indeed—when I was Nearly Starving, and compelled to leave my nest in Search of Food. I tell you what—”

But she never Did tell him. Something attracted her attention. “Mr. Sparrow” said she, with a convulsive sob, “That is Not My Egg.”

And as Mr. Sparrow contemplated the Cuckoo’s Legacy, he couldn’t say it Was.

“My dear,” he said, Very Deliberately, as if the idea had Cost him no end of Thought, “suppose that egg were hatched, now, what Sort of a Bird do you Think there would be inside.”

The Hen Dried her Tears. Her Curiosity was aroused.

“I don’t know,” she said, Composing herself for an Indefinite Sit, “but I’ll see.”

When passion blinds, your adversary may
Work on your weakness, and conquer you that way.

Find stories similar to The Quarrel

Beauty could not help shuddering when she saw the horrible face of the frightful creature, but she made a brave effort to overcome her fear.

Elves in Scotland: Relation with Men

The wife of a farmer in Lothian had fallen into the hands of the fairies, and, during the probationary year, sometimes appeared on a Sunday, among her children, combing their hair.

The Little Birds Who Lived in a Cave

A tiny bird entered the cave and flew straight to a little bird who was only a hen. ‘You,’ said he, ‘shall kill the blackbird.’

The Mad Pranks of Robin Goodfellow

When Robin was grown to six years of age, he was so knavish that all the neighbours did complain of him; for no sooner was his mother’s back turned, but he was in one knavish action or another.