The Sea King and the Magic Jewels

And Prince Fire Fade, standing up in the boat, made obeisance, and thanked the Lord of Sea Salt. But this one girded his august garments and pushed the boat before him, till he was thigh-deep in the water. And he said, “Nay, nay, fair youth, no thanks, only do my bidding.”

So his Augustness, Prince Fire Fade, came to the Sea King’s palace. And he forthwith climbed the cassia tree and waited among its green branches.

At the day’s dawning came the handmaidens of the Sea King’s daughter, with their jewelled vessels, to draw water from the well. And as they stooped to dip their vessels, Prince Fire Fade leaned and watched them from the branches of the cassia tree. And the glory of his august countenance made a brightness upon the waters of the well. So all the maidens looked up and beheld his comeliness, and were amazed. But he spoke them fairly, and desired of them a little water from their vessels. So the maidens drew him water in a jewelled cup (howbeit the jewels were clouded, because of the coldness of the well water), and they presented it to him with all reverence. Then, not drinking the water, Prince Fire Fade took the royal jewel from his neck, and holding it between his two lips he dropped it into the cup, and the cup he gave again to the maidens.

Now they saw the great jewel shining in the cup, but they could not move it, for it clung fast to the gold. So the maidens departed, skimming the water like the white birds of the offing. And they came to the Sea King’s daughter, bearing the cup and the jewel in it.

And the Princess, looking at the jewel, asked them, “Is there, perchance, a stranger at the gate?”

And one of the maidens answered, “There is some one sitting in the branches of the cassia tree which is by our well.”

And another said, “It is a very beautiful young man.”

And another said, “He is even more glorious than our king. And he asked water of us, so we respectfully gave him water in this cup. And he drank none of it, but dropped a jewel into it from his lips. So we have brought them unto Thine Augustness, both the cup and the jewel.”

Then the Princess herself took a vessel and went to draw water at the well. And her long sleeves, and certain of the folds of her august garments, floated behind her, and her head was bound with a garland of sea flowers. And coming to the well she looked up through the branches of the cassia tree. And her eyes met the eyes of Prince Fire Fade.

And presently she fetched her father, the Sea King, saying, “Father, there is a beautiful person at our gate.” So the Sea King came out and welcomed Prince Fire Fade, and said, “This is the August Child of the Heaven’s Sun Height.” And leading him into his palace he caused the floor to be spread with eight layers of rugs of asses’ skins, and eight layers of rugs of silk, and set the Prince upon them.

And that night he made a great banquet, and celebrated the betrothal of Prince Fire Fade to his daughter, the fair Jewel Princess. And for very many days there was held high revel and rejoicing in the Sea King’s palace.

But one night, as they took their ease upon the silken floor, and all the fishes of the sea brought rich dishes, and sweetmeats in vessels of gold and coral and jade to set before them, the fair Jewel Princess herself sat at Prince Fire Fade’s right hand to pour the wine into his cup. And the silver scales upon the palace walls glittered in the moonlight. But Prince Fire Fade looked out across the Sea Path and thought of what had gone before, and so heaved a deep sigh.

Then the Sea King was troubled, and asked him, saying, “Wherefore dost thou sigh?” But Prince Fire Fade answered nothing.

And the fair Jewel Princess, his betrothed wife, came closer, and touched him on the breast, and said softly, “Oh, Thine Augustness, my sweet spouse, art thou not happy in our water palace, where the shadows fall green, that thou lookest so longingly across the Sea Path? Or do our maidens not please thee, who move silently, like the birds of the offing? Oh, my lord, despise me not, but tell me what is in thine heart.”

Then Prince Fire Fade answered, “My lovely lady, Thine Augustness, let nothing be hidden from thee, because of our love.” And he told them all the story of the fish-hook, and of his elder brother’s wrath.

“And now,” he said, “will the Jewel Princess give me counsel?”

And the fishes answered, “Lady, the Tai is in misery, for something sticks in his throat so that he cannot eat. Perchance this may be the august fish-hook of his Augustness, Prince Fire Flash.”

Then the Princess stooped down and lifted the Tai from the water, and with her white hand she took the lost fish-hook from his throat. And after she had washed and dabbled it for a little, she took it in to Prince Fire Fade. And he rejoiced and said, “This is indeed my brother’s fish-hook. I go to restore it instantly, and we shall be reconciled.” For he loved his brother. 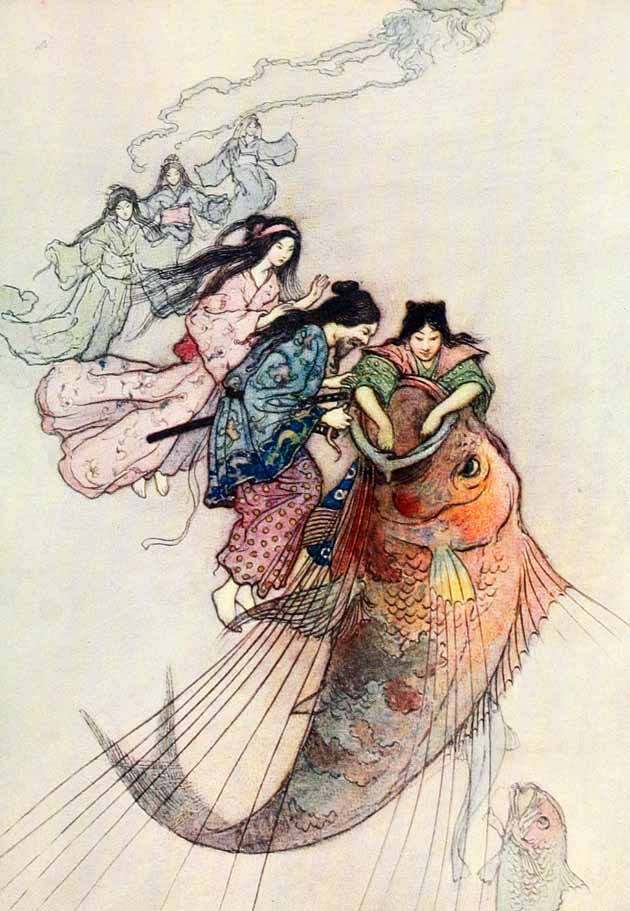 But the fair Jewel Princess stood silent and sorrowing, for she thought, “Now will he depart and leave me lonely.”

And Prince Fire Fade hastened to the water’s edge, and there bestrode a valiant crocodile, who should bring him to his journey’s end. And ere he went, the Sea King spoke: “Fair youth, now listen to my counsel. If thy brother sow rice upon the uplands, do thou sow thy rice low, in the water meads. But if thy brother sow his rice in the water meads, then do thou, Thine Augustness, sow thy rice upon the uplands. And I who rule the rains and the floods will continually prosper the labours of Thine Augustness. Moreover, here are two magic jewels. If thy brother should be moved by envy to attack thee, then put forth the Tide Flowing Jewel and the waters shall arise to drown him. But if thou shouldst have compassion upon him, then put forth the Tide Ebbing Jewel, and all the waters shall subside, and his life be spared.”

And his Augustness Prince Fire Fade gave thanks with obeisance. And he hid the fish-hook in his long sleeve, and hung the two great jewels about his neck. Then the fair Jewel Princess came near and bade him farewell, with many tears. And the Sea King charged the crocodile, saying, “While crossing the middle of the sea, do not alarm him.”

Find stories similar to The Sea King and the Magic Jewels

Manabozho’s Adventure with the Shining Magician

Just then Ma-Ma, the large Woodpecker, lighted on a tree, and said to the Rabbit: ‘Manabozho, there is only one place where you can hurt the Shining Magician. That is on the crown of his head.’

She was a participator in most of the crimes and wild frolics of her time; and was notorious as a fortune-teller, a pickpocket, and a receiver of stolen goods.

The Princess had no sooner taken the spindle than it ran into her hand, and she fell down in a swoon.

Unfortunately, Dabshelim, during this process of melting down his library, grew old, and saw no probability of living long enough to exhaust its quintessence to the last volume.