As he neared it, he found the passage led into a great vaulted cave, and when he stepped inside, he beheld that not only were the walls and floor sparkling with jewels, but wonderful coloured stones dripped from the ceiling like frozen water, and at the end, formed a canopy for a great throne whereon sat a very aged gentleman. In spite of the fierce look this white-bearded old man cast upon him, Bebeck the shepherd did not forget his manners. He knew very well that he was but a lad and should show respect to his elders, and so, pulling off his cap, he went forward and made a low bow, saying, “Good evening, grandfather.”

“What are you doing here, blundering into my home without invitation?” said the old gentleman. “This is the second time I have been disturbed, for who should enter a few minutes since, but a filthy creature with some other brutes after him.”

“He is done for, grandfather,” said the shepherd, respectfully. “My dogs have seen to it that the wolf will trouble you no more. I noticed he had carried off a quantity of precious jewels in his coarse hair, however, and thought it well to come in and see what had been happening. My dogs are on guard outside so that the treasure is safe, and if you desire, I will hasten back and restore it to you.”

“You are a very polite young man,” said the old gentleman. “If you had not bowed and said grandfather, I would have given a very different welcome. But to show you two can play at the game of politeness, I will tell you to keep the jewels the wolf brought out, in return for ridding my cave of the nuisance; and in return for the pleasant way in which you have greeted me, take up that sack, and fill it with anything you fancy. But do not come back for more; you might find me in a bad temper next time, and then I should see to it that the stones fell down on your head and destroyed you. I must have quiet and can’t encourage visitors. Besides, one of these days I shall leave, and Woe betide the man who comes when I am breaking up my home!” The shepherd hastened to thank the old gentleman, and to fill the sack as quickly as possible and then made his best bow and hurried out. 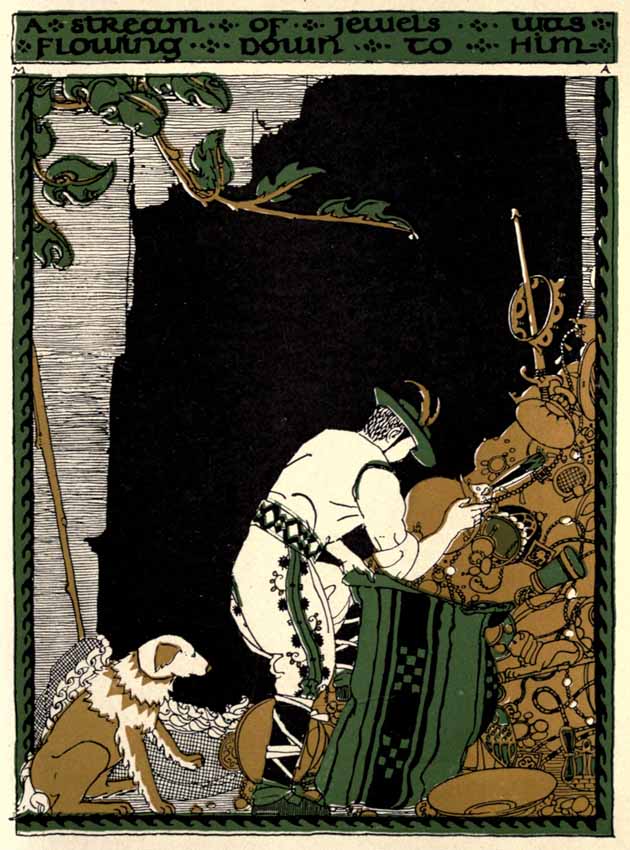 After a good deal of turning and twisting he saw daylight and rushing towards it, came onto the mountain to find he had spent the night inside the caves, and dawn was now shedding its cool light. The dogs and the lamb were still there, none the worse and all the better for their rest, and they all went down the mountain side.

When he came into his hut, the shepherd poured his heap of jewels on the table and wondered at their beauty. They were obviously worth a great deal of money, but the shepherd had no need of any! He was perfectly satisfied with the food the mountain provided, with his dear little hut which his clever fingers had made so bright and gay, and with the work which God had given him to do. Think as hard as he could, he could not discover a single thing he lacked. He did not even wish to keep the jewels lying about, so that he might look at them; his hut was very small and he fitted into it as a nut fits its shell; everything sufficient for his needs was there, and no more.

So at last he took a great pan of milk and churned it till he made a great cheese. While it was still soft, he made a hole in the middle and poured all the jewels within, then he tied the cheese up in a sheet and drained it, and then he pressed it, and by that time he had a great, hard, smooth cheese, that no one would guess was full of treasure. He put the cheese in his cupboard, and that was the end of his fortune as far as he was concerned!

Summer passed, and autumn came and all the trees in the forest became gold and scarlet, and the shepherd dyed his yarns and got in a fine store of stuffs and yarns for his winter evenings. Then the winds blew loud and the snow fell and it was winter. Now the sheep huddled together in the sheepfold and the shepherd played his flute and painted a grand chest he had made in the summer, in which he would keep the winter coats and furs. For a change, he would take up his needle, and make beautiful patterns on the coat he wore to the town on feastdays and holidays. He had not to hurry, so could stitch as slowly as he pleased and make a thousand petals in a rose. Ah, these were happy evenings, with the door closed, the sheep safe in the fold, the wind howling round the little hut, and within, the candle burning brightly and the wood fire leaping up the chimney and fair flowers growing and glowing on the chest or the coat, till it was summer inside the hut and the shepherd whistled for joy.

But one evening there was such a storm that the torrents sounded as if they must surely flood the mountain, the great trees bent and cracked, and boughs fell everywhere, the wind rushed round the little hut as if it would tear the roof off, and even the dogs looked up once or twice from their sleep on the hearth. The shepherd, however, was painting a wild strawberry on his chest, and before his eyes, floated so vivid a picture of its pure white flower, and scarlet berry and neat glossy leaves, that blue sky and bright sunshine and fresh grass seemed everywhere, and his whistle had the music of a purling rill, as gentle and delicate.

The King took another wife, a beautiful woman, but proud and overbearing, and she could not bear to be surpassed in beauty by any one.

As soon as the Mouse and the Dried Pea looked into the soup pot they saw what had happened. ‘Oh, dear!’ said the Sausage. ‘Poor Mouse is drowned in the soup.’

Clothed in the Lion's skin, the young Ass strutted forth believing himself a very Lion, and causing men to flee before him in terror.