“What does it Taste like?” asked the Stork who was Very Thirsty.

“No,” replied the Stork, honestly enough.

“Why you’re no Stork at all!” exclaimed the Fox. “You’re a Goose, that’s what you are. Fancy a Bird of your Social Position never drinking wine. The Storks where I come from drink wine Every Day.”

“Indeed,” said the Bird, in Wonder.

“And they Grow fat and merry. Their plumage is sublime, and their Eyes—their Eyes,” repeated the Fox, gaining time to coin a Fitting Simile, “why, my Dear, their Eyes Shine like Diamonds.” The Stork reflected, and Reynard continued, “I’ve never seen Such a subdued looking Bird of Your species Before. I suppose it is owing to your Never having Drunk Wine.”

“What is it to looked Subdued?” questioned the simple Stork.

“Well—aw—to look as if your Own Tail didn’t Belong to You.”

“Oh,” said the Stork, then after a moment’s thought, “what would you Advise to me Do?”

“How can I Drink it?” asked the Stork.

“After the General Fashion, I usually drink with my mouth. You’ve a pretty Long Beak of your own, which is a Decided Advantage.”

And the Foolish Stork did try. 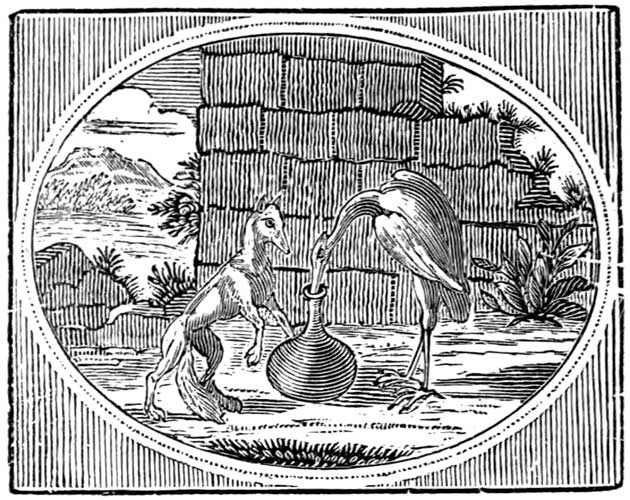 “I can’t drink,” she said, from the Depths of the Bottle.

“And yet I can’t Drink,” said the Stork, in a Muffled Voice.

“Then pull your head out,” said the Fox.

“Very well then, keep your head where it is. There’s very Little Picking on it,” he observed. “Now I can have my Breakfast, sure, I’ve Waited long Enough.” And the Wicked Fox Ate up the poor Stork.

Beware of strangers, who would fain simplicity deride,
Don’t listen to their foolish talk,
Or emulate their pride.