Once upon a time there was a king and a queen, who were very sorry that they had no children,—so sorry that it cannot be told.

At last, however, the Queen had a daughter. There was a very fine christening; and the Princess had for her godmothers all the fairies they could find in the whole kingdom (there were seven of them), so that every one of them might confer a gift upon her, as was the custom of fairies in those days. By this means the Princess had all the perfections imaginable.

After the christening was over, the company returned to the King’s palace, where was prepared a great feast for the fairies. There was placed before every one of them a magnificent cover with a case of massive gold, wherein were a spoon, and a knife and fork, all of pure gold set with diamonds and rubies. But as they were all sitting down at table they saw a very old fairy come into the hall. She had not been invited, because for more than fifty years she had not been out of a certain tower, and she was believed to be either dead or enchanted.

The King ordered her a cover, but he could not give her a case of gold as the others had, because seven only had been made for the seven fairies. The old fairy fancied she was slighted, and muttered threats between her teeth. One of the young fairies who sat near heard her, and, judging that she might give the little Princess some unlucky gift, hid herself behind the curtains as soon as they left the table. She hoped that she might speak last and undo as much as she could the evil which the old fairy might do.

The old fairy’s turn coming next, her head shaking more with spite than with age, she said that the Princess should pierce her hand with a spindle and die of the wound. This terrible gift made the whole company tremble, and everybody fell a-crying.

At this very instant the young fairy came from behind the curtains and said these words in a loud voice:

“Assure yourselves, O King and Queen, that your daughter shall not die of this disaster. It is true, I have no power to undo entirely what my elder has done. The Princess shall indeed pierce her hand with a spindle; but, instead of dying, she shall only fall into a deep sleep, which shall last a hundred years, at the end of which a king’s son shall come and awake her.”

The King, to avoid the misfortune foretold by the old fairy, issued orders forbidding any one, on pain of death, to spin with a distaff and spindle, or to have a spindle in his house.

About fifteen or sixteen years after, the King and Queen being absent at one of their country villas, the young Princess was one day running up and down the palace; she went from room to room, and at last she came into a little garret on the top of the tower, where a good old woman, alone, was spinning with her spindle. This good woman had never heard of the King’s orders against spindles. 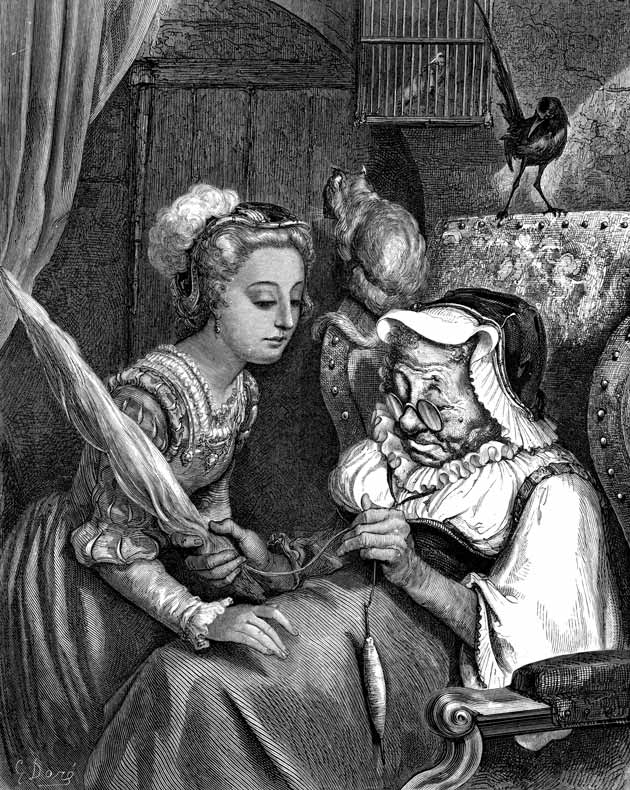 “What are you doing there, my good woman?” said the Princess.

“I am spinning, my pretty child,” said the old woman, who did not know who the Princess was.

She had no sooner taken it into her hand than, either because she was too quick and heedless, or because the decree of the fairy had so ordained, it ran into her hand, and she fell down in a swoon.

The good old woman, not knowing what to do, cried out for help. People came in from every quarter; they threw water upon the face of the Princess, unlaced her, struck her on the palms of her hands, and rubbed her temples with cologne water; but nothing would bring her to herself.

Then the King, who came up at hearing the noise, remembered what the fairies had foretold. He knew very well that this must come to pass, since the fairies had foretold it, and he caused the Princess to be carried into the finest room in his palace, and to be laid upon a bed all embroidered with gold and silver. One would have taken her for a little angel, she was so beautiful; for her swooning had not dimmed the brightness of her complexion: her cheeks were carnation, and her lips coral. It is true her eyes were shut, but she was heard to breathe softly, which satisfied those about her that she was not dead.

The King gave orders that they should let her sleep quietly till the time came for her to awake. The good fairy who had saved her life by condemning her to sleep a hundred years was in the kingdom of Matakin, twelve thousand leagues off, when this accident befell the Princess; but she was instantly informed of it by a little dwarf, who had seven-leagued boots, that is, boots with which he could stride over seven leagues of ground at once. The fairy started off at once, and arrived, about an hour later, in a fiery chariot drawn by dragons.