The King handed her out of the chariot, and she approved everything he had done; but as she had very great foresight, she thought that when the Princess should awake she might not know what to do with herself, if she was all alone in this old palace. This was what she did: she touched with her wand everything in the palace (except the King and Queen), governesses, maids of honor, ladies of the bedchamber, gentlemen, officers, stewards, cooks, undercooks, kitchen maids, guards with their porters, pages, and footmen; she likewise touched all the horses which were in the stables, the cart horses, the hunters and the saddle horses, the grooms, the great dogs in the outward court, and little Mopsey, too, the Princess’s spaniel, which was lying on the bed.

As soon as she touched them they all fell asleep, not to awake again until their mistress did, that they might be ready to wait upon her when she wanted them. The very spits at the fire, as full as they could hold of partridges and pheasants, fell asleep, and the fire itself as well.

All this was done in a moment. Fairies are not long in doing their work.

And now the King and Queen, having kissed their dear child without waking her, went out of the palace and sent forth orders that nobody should come near it.

These orders were not necessary; for in a quarter of an hour’s time there grew up all round about the park such a vast number of trees, great and small, bushes and brambles, twining one within another, that neither man nor beast could pass through; so that nothing could be seen but the very top of the towers of the palace; and that, too, only from afar off. Every one knew that this also was the work of the fairy in order that while the Princess slept she should have nothing to fear from curious people.

After a hundred years the son of the King then reigning, who was of another family from that of the sleeping Princess, was a-hunting on that side of the country, and he asked what those towers were which he saw in the middle of a great thick wood. 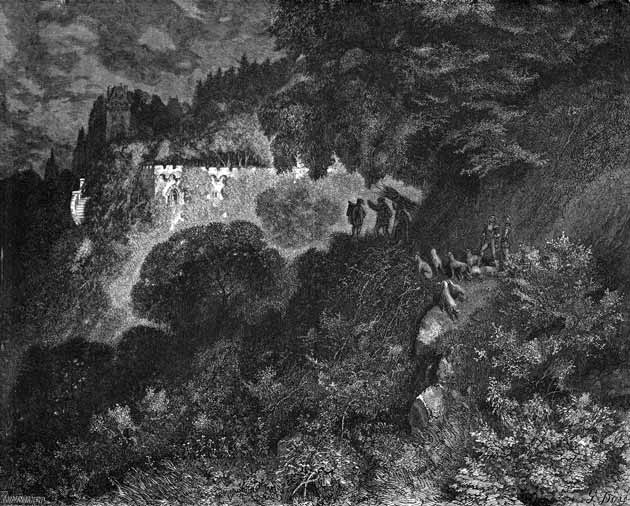 Every one answered according as they had heard. Some said that it was an old haunted castle, others that all the witches of the country held their midnight revels there, but the common opinion was that it was an ogre’s dwelling, and that he carried to it all the little children he could catch, so as to eat them up at his leisure, without any one being able to follow him, for he alone had the power to make his way through the wood.

The Prince did not know what to believe, and presently a very aged countryman spake to him thus:

“May it please your royal Highness, more than fifty years since I heard from my father that there was then in this castle the most beautiful princess that was ever seen; that she must sleep there a hundred years, and that she should be waked by a king’s son, for whom she was reserved.”

The young Prince on hearing this was all on fire. He thought, without weighing the matter, that he could put an end to this rare adventure; and, pushed on by love and the desire of glory, resolved at once to look into it.

As soon as he began to get near to the wood, all the great trees, the bushes, and brambles gave way of themselves to let him pass through. 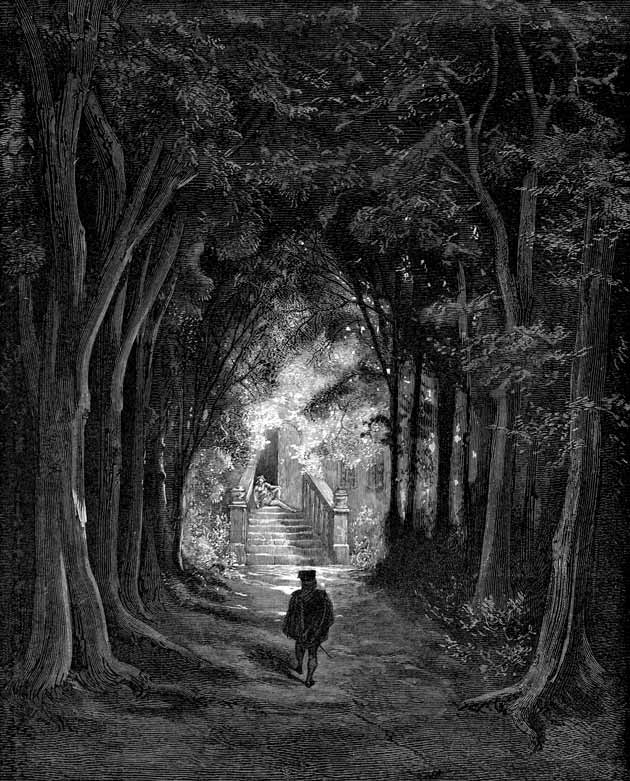 He walked up to the castle which he saw at the end of a large avenue; and you can imagine he was a good deal surprised when he saw none of his people following him, because the trees closed again as soon as he had passed through them. However, he did not cease from continuing his way; a young prince in search of glory is ever valiant.

He came into a spacious outer court, and what he saw was enough to freeze him with horror. A frightful silence reigned over all; the image of death was everywhere, and there was nothing to be seen but what seemed to be the outstretched bodies of dead men and animals. He, however, very well knew, by the ruby faces and pimpled noses of the porters, that they were only asleep; and their goblets, wherein still remained some drops of wine, showed plainly that they had fallen asleep while drinking their wine. 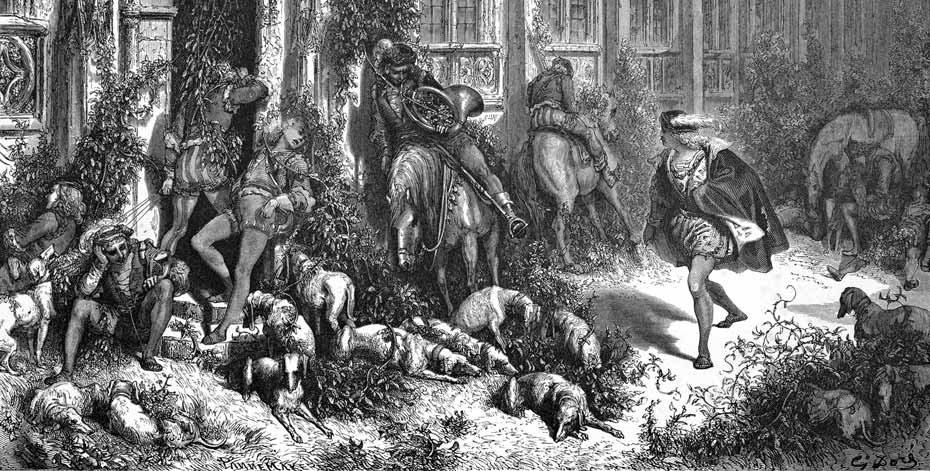 He then crossed a court paved with marble, went up the stairs, and came into the guard chamber, where guards were standing in their ranks, with their muskets upon their shoulders, and snoring with all their might. He went through several rooms full of gentlemen and ladies, some standing and others sitting, but all were asleep. He came into a gilded chamber, where he saw upon a bed, the curtains of which were all open, the most beautiful sight ever beheld a princess who appeared to be about fifteen or sixteen years of age, and whose bright and resplendent beauty had something divine in it. He approached with trembling and admiration, and fell down upon his knees before her.

Find stories similar to The Sleeping Beauty in the Woods

‘Writer,’ screamed the Ink above his liquid, ‘Writer, which does the Most work, the Pen or Me?’

Although there were plenty of princesses, there was always something that did not seem quite right about them.

The wolf thought to himself, ‘That tender young thing would be a delicious morsel, and would taste better than the old one.’