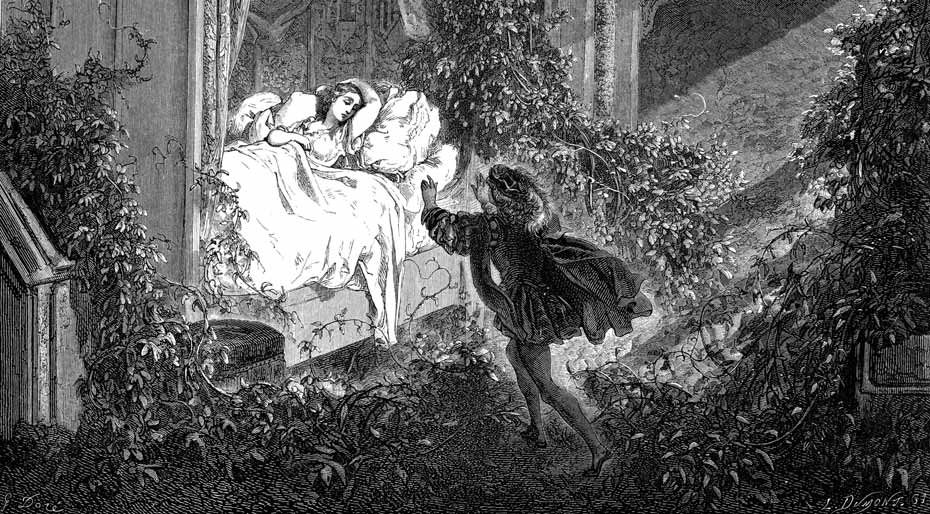 Then, as the end of the enchantment was come, the Princess awoke, and looking on him with eyes more tender than could have been expected at first sight, said:

“Is it you, my Prince? You have waited a long while.”

The Prince, charmed with these words, and much more with the manner in which they were spoken, knew not how to show his joy and gratitude; he assured her that he loved her better than he did himself. Their discourse was not very connected, but they were the better pleased, for where there is much love there is little eloquence. He was more at a loss than she, and we need not wonder at it; she had had time to think of what to say to him; for it is evident (though history says nothing of it) that the good fairy, during so long a sleep, had given her very pleasant dreams. In short, they talked together for four hours, and then they said not half they had to say.

In the meanwhile all the palace had woke up with the Princess; every one thought upon his own business, and as they were not in love, they were ready to die of hunger. The lady of honor, being as sharp set as the other folks, grew very impatient, and told the Princess aloud that the meal was served. The Prince helped the Princess to rise. She was entirely and very magnificently dressed; but his royal Highness took care not to tell her that she was dressed like his great-grandmother, and had a high collar. She looked not a bit the less charming and beautiful for all that.

They went into the great mirrored hall, where they supped, and were served by the officers of the Princess’s household. The violins and haut-boys played old tunes, but they were excellent, though they had not been played for a hundred years; and after supper, without losing any time, the lord almoner married them in the chapel of the castle. They had but very little sleep—the Princess scarcely needed any; and the Prince left her next morning to return into the city, where his father was greatly troubled about him.

The Prince told him that he lost his way in the forest as he was hunting, and that he had slept in the cottage of a charcoal-burner, who gave him cheese and brown bread.

The King, his father, who was a good man, believed him; but his mother could not be persuaded that it was true; and seeing that he went almost every day a-hunting, and that he always had some excuse ready for so doing, though he had been out three or four nights together, she began to suspect that he was married; for he lived thus with the Princess above two whole years, during which they had two children, the elder, a daughter, was named Dawn, and the younger, a son, they called Day, because he was a great deal handsomer than his sister.

The Queen spoke several times to her son, to learn after what manner he was passing his time, and told him that in this he ought in duty to satisfy her. But he never dared to trust her with his secret; he feared her, though he loved her, for she was of the race of the Ogres, and the King married her for her vast riches alone. It was even whispered about the Court that she had Ogreish inclinations, and that, whenever she saw little children passing by, she had all the difficulty in the world to prevent herself from falling upon them. And so the Prince would never tell her one word.

But when the King was dead, which happened about two years afterward, and he saw himself lord and master, he openly declared his marriage; and he went in great state to conduct his Queen to the palace. They made a magnificent entry into the capital city, she riding between her two children.

Soon after, the King made war on Emperor Cantalabutte, his neighbor. He left the government of the kingdom to the Queen, his mother, and earnestly commended his wife and children to her care. He was obliged to carry on the war all the summer, and as soon as he left, the Queen-mother sent her daughter-in-law and her children to a country house among the woods, that she might with the more ease gratify her horrible longing. Some few days afterward she went thither herself, and said to her head cook:

“I intend to eat little Dawn for my dinner to-morrow.”

“I will have it so,” replied the Queen (and this she spoke in the tone of an Ogress who had a strong desire to eat fresh meat), “and will eat her with a sharp sauce.”

The poor man, knowing very well that he must not play tricks with Ogresses, took his great knife and went up into little Dawn’s chamber. She was then nearly four years old, and came up to him, jumping and laughing, to put her arms round his neck, and ask him for some sugar-candy. Upon which he began to weep, the great knife fell out of his hand, and he went into the back yard and killed a little lamb, and dressed it with such good sauce that his mistress assured him she had never eaten anything so good in her life. He had at the same time taken up little Dawn and carried her to his wife, to conceal her in his lodging at the end of the courtyard.

Why Spiders are Always Found in the Corners of Ceilings