First story:
Deals with a mirror and its fragments

Now we are about to begin, and you must attend; and when we get to the end of the story, you will know more than you do now about a very wicked hobgoblin.

He was one of the worst kind; in fact he was a real demon. One day he was in a high state of delight because he had invented a mirror with this peculiarity, that every good and pretty thing reflected in it shrank away to almost nothing. On the other hand, every bad and good-for-nothing thing stood out and looked its worst. The most beautiful landscapes reflected in it looked like boiled spinach, and the best people became hideous, or else they were upside down and had no bodies. Their faces were distorted beyond recognition, and if they had even one freckle it appeared to spread all over the nose and mouth.

The demon thought this immensely amusing. If a good thought passed through anyone’s mind, it turned to a grin in the mirror, and this caused real delight to the demon. 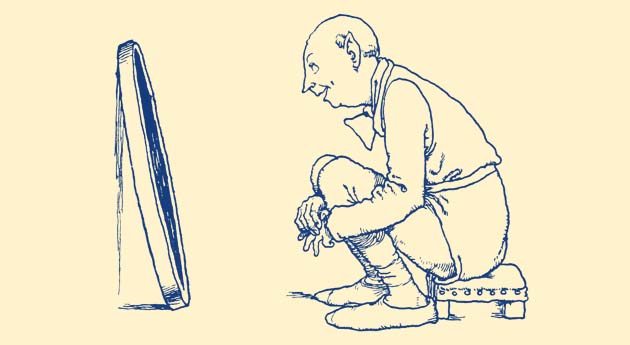 All the scholars in the demon’s school, for he kept a school, reported that a miracle had taken place; now for the first time it had become possible to see what the world and mankind really were like. They ran about all over with the mirror, till at last there was not a country or a person which had not been seen in this distorting mirror.

They even wanted to fly up to heaven with it to mock the angels; but the higher they flew, the more it grinned, so much so that they could hardly hold it, and at last it slipped out of their hands and fell to earth, shivered into hundreds of millions and billions of bits. Even then it did more harm than ever.

Some of these bits were not as big as a grain of sand, and these flew about all over the world, getting into people’s eyes, and, once in, they stuck there, and distorted everything they looked at, or made them see everything that was amiss.

Each tiniest grain of glass kept the same power as that possessed by the whole mirror. Some people even got a bit of the glass into their hearts, and that was terrible, for the heart became like a lump of ice. Some of the fragments were so big that they were used for window panes, but it was not advisable to look at one’s friends through these panes. Other bits were made into spectacles, and it was a bad business when people put on these spectacles meaning to be just. The bad demon laughed till he split his sides; it tickled him so to see the mischief he had done. But some of these fragments were still left floating about the world, and you shall hear what happened to them.