The Story of Gitto Bach

As related by Shone Tomos Rhytherch1

1. The lady to whom the compiler is indebted for the following collection of oral tales, in a letter dated 1st March, 1827, writes thus:

“I have cut out from the Cambrian newspaper the death of Shone Tomos Shone Rhytherch, alias John Jones, alias ‘Cobbler Jig,’ as he was commonly called by the country-people here, which was a great affront to him. I never saw the poor old man after he related to me his stories: he was one of the most entertaining persons I ever met with, and to those who understood Welsh, he was certainly a great treat.

“On Wednesday, the 31st ult. at Ty-yn-y-Craig, near Aberpergwm, in the vale of Neath, John Jones, better known by the name of ‘Cobbler Jig,’ at the advanced age of 91. He was a native of Llewel, in Breconshire, and when a young man lived as servant at Ynis-y-gerwn, and was distantly related to the late Mrs. Gwyn, of Pant-y-Corrid, in that county. For the last twenty years he has resided in the vale of Neath, and has chiefly supported himself by cobbling, and occasionally gardening. The eccentricity of his character, and his jocular disposition, together with his advanced age, had rendered him a great favourite among the respectable families in the neighbourhood; and what is remarkable, although daily working at his trade of mending shoes, his eye-sight was so good that he never wore spectacles. At his request, his remains were taken to Croynant Chapel for interment, where his wife was buried about twenty years ago. Rees Williams, Esq. of Aberpergwm, very kindly sent a number of his workmen to assist in carrying his remains to their last home, a distance of seven miles.”

“Don’t talk to me, you silly young things—don’t provoke an old man, now upwards of ninety years of age, by saying there were no fairies in Wales. If your great grandfather was alive, he would confirm every word of what I say. ‘Tis of what I saw, I speak, and will speak, while I have breath. I tell you that fairies were to be seen in the days of my youth by the thousand, and I have seen them myself a hundred times. Indeed, when I was a boy, it was dangerous to leave children in their cradles, without some one to watch them; so common was it for the fairies to steal them away.

“There was poor Howel, Merodydd Shone Morgan’s family2; what trouble they had when they lived on the Rhos3, in the Creinant, when Gitto Bach4 was stolen away. Gitto was a fine boy, and would often ramble alone to the top of the mountain to look at his father’s sheep; and when he returned, he would show his brothers and sisters a number of pieces, the size of crowns, with letters stamped upon them, and resembling them exactly, only that they were made of a peculiarly white paper. When asked where he had found them, he would say, ‘The little children with whom I play on the mountain give them me;’ he always called them the little children.

2. The peasants in Wales generally add their father’s Christian name to their own, and sometimes their grandfather’s, and even their great grandfather’s, and so on, until at last their names become almost interminable. Pennant relates, “that Thomas ap Richard ap Howel ap Jevan Vychan, lord of Mostyn, and his brother Piers, founder of the family of Trelace, were the first who abridged their name in Wales; and that on the following occasion: Rowland Lee, bishop of Lichfield, and president of the marches of Wales, in the reign of Henry VIII, sat at one of the courts on a Welsh cause, and, wearied with the quantity of “aps” in the jury, directed that the pannel should assume their last name, or that of their residence; and that Thomas ap Richard ap Howel ap Jevan Vychan should for the future be reduced to the poor dissyllable Mostyn; no doubt to the great mortification of many an ancient line.”—Vol. i. p. 18. 8vo ed. 1810.

3. A plain. The Creinant is a small secluded village in the mountains, consisting of a few scattered houses.

4. Gitto is an abbreviation of Griffith; bach signifies little, like the Irish beg.

“At length, one day, poor little Gitto was missing. The whole neighbourhood was in a commotion. Search was made; but no little Gitto was heard of: two years elapsed, and the still desponding mother received no other intelligence, than in fresh cause of alarm for the safety of her other children. For they took to wandering on the mountains, and from one or two excursions they had returned with coins resembling those which had been given to Gitto previous to his disappearance; whereupon the family became doubly vigilant in watching these children, and the cottage-door was cautiously secured with bars and bolts. One morning, as the mother opened the door, what should she see but little Gitto sitting on the threshold, with a bundle under his arm? He was the very same size, and apparently the same age, and dressed in the same little ragged dress, as on the day of his departure from the Rhos.

“‘My child!’ said the astonished and delighted mother, ‘where have you been this long, long while?’

“‘Mother,’ said Gitto, ‘I have not been long away; it was but yesterday that I was with you. Look what pretty clothes I have in this bundle, given to me yesterday by the little children on the mountain, for dancing with them while they played on their harps.’

“The mother opened the bundle; it contained a dress of very white paper, without seam or sewing. She very prudently burnt it immediately, having ascertained that it was given him by the fairies.

“This extraordinary occurrence,” continued the narrator, “interested me much, and made me more anxious than ever to see the fairies; and as I was walking one evening with my companion Davidd Rhys, near Pant Owns, above the Dinas Rock, we met a gipsy, and conversed with her. I expressed to her my great desire to see the fairies.’

“‘Ah, Shone!’ said she, ‘it is not to every one it is given to see the good people; but I have the power, and can dispense it to you, if you follow my directions. Go and find a clover with four leaves5 (meillionen pedair ddalen), and bring nine grains of wheat, and put them on this leaf, in this book;’ handing me a book which she took out of her pocket.

5. Many superstitions in Ireland are attached to a four-leaved shamroc. The lucky finder of one is believed, by means of it, to acquire the power of seeing airy beings, and things invisible to other eyes—of causing all doors, however strongly barred and bolted, to fly open at will, &c. The old Welsh poem called Kadeir Taliesin (Welsh Archol. p. 37), or the Chair of Taliesin, the obscurity of which is supposed to be a detailed account of mystic Druidical rites, contains, among other ingredients,

“And the honoured segyrffyg, and medical plants from an exorcised spot.”
“Segyrffyg,” says Mr. Davis, in his Mythology of the British Druids, p. 277, “means, protecting from illusion;” he imagines it to be the name of some plant, and adds, that “the populace of Wales ascribe the virtue implied by this name to a species of trefoil.” Four white trefoils are said to have instantly sprung up wherever Olwen trod upon the ground.—See Owen’s Cam. Biog. 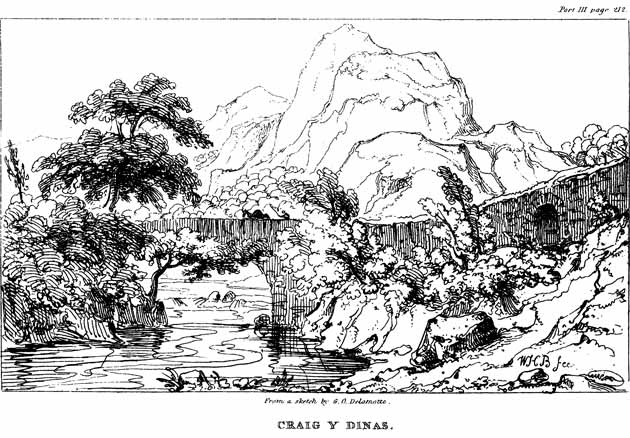 “I did as the gipsy told me. ‘Now,’ said she, ‘Shone, meet me by moonlight to-morrow night on the top of Craig y Dinas6.” I did so. She took a phial, and washed my eyes with its contents; and as soon as I opened my eyes, I saw at a short distance thousands of little people all in white, dancing in a circle to the sound of at least a score of harps. After dancing for some time, they left the circle, and formed a line on the brow of the hill; the one next the precipice squatted down, clasped her hands under her knees, and tumbled, tumbled, tumbled, head-over-heels, head-over-heels, all the way down the hill; the rest all following her example, until they were lost in the dark wood of the valley beneath.

6. An etching of Craig y Dinas, from an original sketch, is annexed.

“After this adventure, I was in the habit of seeing them continually. And you, Morgan Gwillim (Morgan was sitting in an arm-chair opposite the narrator), in your younger days, you saw the fairies as well as I.

“Oh, that I’ll swear to, although I never took an oath in my life,” replied Morgan. “I have seen them on the Varteg7, and by Cylepsta Waterfall8, and by Sewyd yr Rhyd, in Cwm Pergwm9; and I once saw them, and I never saw them to such perfection, as when I stood between the cascade and the rock10, over which it fell; I could at that moment see them distinctly glittering in all the colours of the rainbow, and hear their music softly blending with the murmur of the waterfall. After enjoying themselves here for some time, they all proceeded into a small cave11, which they had made in the rock, where they seemed to be exceedingly amused, laughing, and having a great deal of merriment: then they ascended the rock, and frisked away; the sound of their melodious harps dying away among the mountains, whither they had fled; and the last strain I heard sounded something like this:

but the falling cadence I could not catch for the life of me, it was so faint.”

9. Sewyd yr Rhyd is a waterfall in the grounds of W. Williams, Esq. Aberpergwn, Vale of Neath, where the fairies are said to bathe.

10. The valleys in the neighbourhood of Pontneathvaughan abound with waterfalls, several of which are of considerable height, and surrounded by the most romantic scenery. In some instances the rock, over which the water is projected, so overhangs its base as to admit of a road being made between it and the waterfall.

11. The cave, thus attributed to the industry of the fairies, is still to be seen in Cwm Pergwm.

Morgan added, that his wife, Shone, had often seen them with their white mantles12, and sometimes they were to be seen bearing each other’s trains. Indeed she saw them so often, that she at last took no notice of them.

12. “Cyvliw eiry gorwyn gorwydd hynt”. “Of the same hue as the extremely white snow of the front of the declivity.”