The Story of Hans Christian Andersen

Hans Christian Andersen was born in a room so small that his crib, the large bed, and his father’s shoemaker’s bench took up almost all the space there was. But the walls of the room were covered with pictures, and over the workbench was a little shelf containing books and songs. Also, since this room was used as kitchen as well as bedroom, workshop, and parlor, there were many shining plates and metal pans in it to delight the eyes of the child. A ladder in one corner of the room led up to the roof, where there was a large box of earth that Hans’ mother used as a vegetable garden. You will remember this garden when you read about the playground of Gerda and Kay in “The Snow Queen,” one of the stories written later in life by this very boy, by Hans Christian Andersen.

In this room Hans’ father sat day by day, making and mending shoes. All his life Hans’ father had wished to go to school and to study, but as he was a poor man and it cost money in those days to go to school, he had been unable to get any education except what he could pick up for himself. But now at night he read to his little son stories from “The Arabian Nights,” passages from great plays, and many chapters from that best of all story books, the Bible. He was no longer the poor cobbler making and mending shoes. Together, he and Hans were carried away into the scenes of the stories that they read. They forgot the little room and the shoemakers bench; they forgot everything but that realm of the fancy and of fairyland in which all his life Hans Christian Andersen delighted to live.

On warm spring Sundays Hans’ father took him out into the fragrant woods. Here the father would sit and dream while Hans played among the trees, stringing wild strawberries on a twig, or making garlands of wild flowers. When they went home they took branches of green to decorate the little room that Hans’ mother always kept clean and bright.

When Hans was only three years old the Spanish and French soldiers that were fighting with Denmark against Sweden took possession of Odense, the little town in Denmark in which Hans lived. The bright uniforms of the soldiers, the noise of their cannon, and the music of their bands made a great impression on Hans’ mind. The remembrance of having seen one poor soldier carried away to be hanged remained with him so vividly that long years afterward he wrote a little poem about it, called “The Soldier.” And a happier record of the impression is left in the story of “The Tinder Box,” which is printed in this volume.

One night there was great excitement in the town in which Hans lived. A comet appeared in the skies. Little Hans, like his mother and grandmother and the other poor, ignorant people of Odense, thought surely that it meant that the end of the world had come. Hans’ father was the only one who laughed at the belief, and Hans and his mother cried bitterly, for they feared something dreadful would happen to Hans’ father because of his strange ideas. Hans clung to his mothers skirt as she stood among the people who had gathered in the churchyard to gaze at the mighty ball of fire with its flaming tail. This was an experience that Hans never forgot. Of course the world did not come to an end, as the old townspeople had said it would, but Hans, in the days that followed, sometimes wished that it had!

For now Hans had to go to school. He went first to an old lady, who, like the old woman in the shoe, carried her birch rod about with her continually. She taught Hans his A B Cs at least; but even after Hans had left her school for a boys’ school higher in grade he did not learn much. For he was so very busy making up stories, and listening to the stories other people told, that he did not pay much attention to his lessons. And he was sorry enough about this later on, for when he was older and tried to write out his stories he did not know how to do it very well, and he had to study hard in order to make up for lost time. 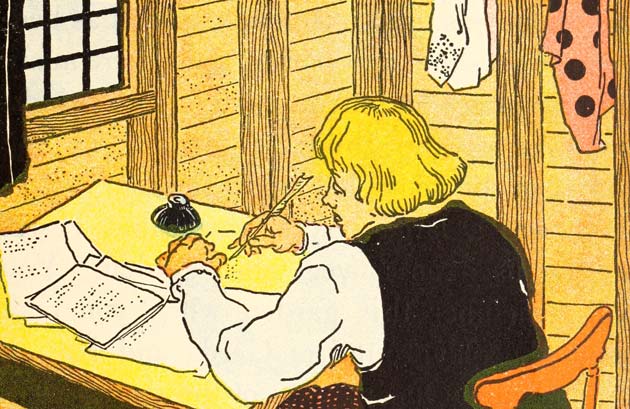 In the house in which all the poor old people of the village were taken care of, Hans’ grandmother was employed. Here Hans often spent long hours in the room where the old women sat busily spinning. They told him stories that their fathers and mothers and their grandmothers and grandfathers had told to them. These were the stories that had come from no one knew where, so long ago did the oldest living person remember having heard them. Such stories we of today call folk stories, since they were not at first contained in any book, but were carried about in the hearts and minds of the people. These were the stories that Hans afterward wrote out or used in making stories of his own; and now his head was so full of them that he could not learn what is ordinarily taught to every boy and girl. And so Hans made very little use of his A B C’s and his multiplication table.

But one day Hans’ father and mother took him to the theater. Hans was delighted with the great crowd of people, the bright lights, the talk and dress and gestures of the actors on the stage. After he went home his father helped him build a toy theater of his own. For actors he used little dolls whose dresses he cut out of the scraps of cloth that he begged from his mother or her neighbors. He made these little dolls act out the stories that the old spinning women had told him. He thought up speeches of his own for them to say, and had them talk and walk and strut across the stage as he had seen real actors do.

Hans was happier than he had ever been, but unfortunately his happiness did not last long; for his father was taken ill and died, and his mother had to go out to wash in order to earn their living. Hans was left alone a great deal, and the neighbors scolded Hans’ mother for letting the boy remain idle. She was just about to apprentice him to a tailor when something happened to change the whole current of Hans’ life.

Hans was nearly fourteen that summer when a troupe of actors from the Royal Theater came to Odense. Hans made friends with the billposter and was allowed to go behind the scenes. Once or twice he was even allowed to act the part of a page or a shepherd with a few words to say. He found that being an actor himself was much more exciting than having dolls to act for him in a toy theater.

So he begged his mother not to apprentice him to a tailor, but to let him go to Copenhagen, where the Royal Theater was. When his mother asked him what he expected to do there, he answered that he intended to become famous. He had read about a great many famous men. “You go through a frightful lot of hardships first,” he said, “and then you become famous!”

And now what do you think happened ?

His mother sent for a woman who was supposed to tell the future by means of coffee grounds and cards. She shook the cup round and round, shuffled the cards, and declared that Hans Christian Andersen would become a great and famous man. “Odense will one day be illuminated in honor of him!” she said. 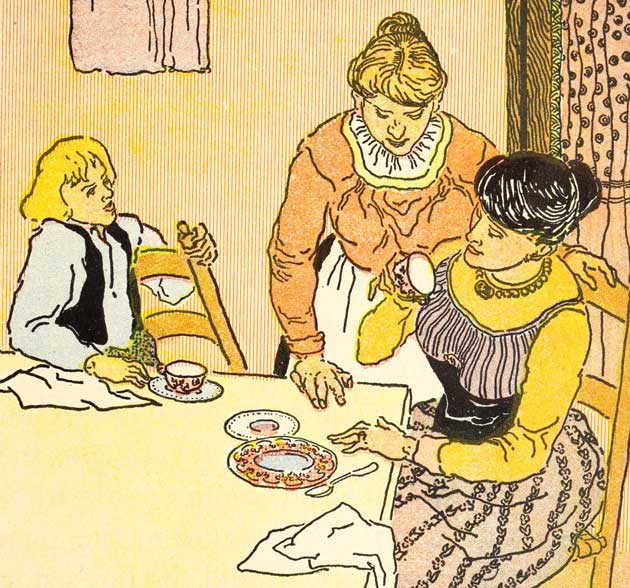 “Hans Christian Andersen will be a great and famous man.”

At this Hans’ mother burst into tears, and gave consent to her son’s journey. She must, however, have hoped that he would not really go so far away from her, for she said to a neighbor, “When he gets to Nyborg and sees the rough sea he will soon turn back!”

For a moment the girl sat choked with fear, as these thoughts rushed through her; then she said: ‘Alonzo, will you promise me something?’

The Squirrel and the Spider

Squirrel appealed to the law, but the court decided that no one had ever had a farm without a road leading to it, therefore the fields must be Spider’s.