The Story of the Pine Trees

During this first summer, the trees could walk just like the animals. At first this was rather disturbing. The Raven would fly home at night to the spot where she had left her tree in the morning, and she would find only a hole in the ground. Sometimes she would go to sleep after having had a chat with the crow. When she waked up she would call to the crow. Then she would find that her tree had gone for an early morning stroll, and that she was many miles away from her neighbors. 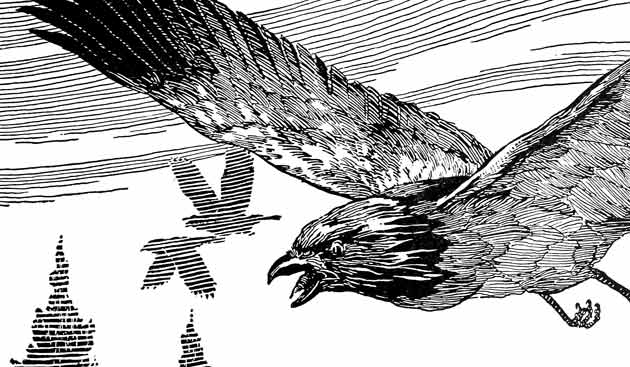 The Raven would fly home at night and find only a hole in the ground.

However, the birds soon got used to these traveling trees. After a while they really liked the excitement of not being sure in what part of the country they would sleep or wake. But as autumn came on, they felt the need of a steady home, particularly when the weather was bad.

For gradually the summer was dying. The maple trees were changing their green into yellow and scarlet. The oak leaves were becoming brown and shriveled. The aspens and beeches were casting their green leaves in heaps on the ground.

Worst of all, the Thunder Bird appeared very often. He was a terrible creature. His big body and his head and wings were made of black clouds, and his eyes and mouth of fire. He was so large that his shadow darkened all the heavens. The Sun would be shining, and all of a sudden the big bird’s wings would snuff it out. Whenever he flapped these wings, he made thunder. Whenever he winked and flashed his eyes, great streaks of lightning tore across the sky. No wonder the animals feared him. They knew that whenever he came it would rain.

As the weather grew colder, many of the animals suffered greatly. But the pine trees and the cedars did not mind the cold. They alone seemed bright and cheerful.

“Why are they so happy when we feel so uncomfortable?” asked the animals.

“Because they have the secret of fire, my children,” answered Manabozho. “If you can get it from them, you will be warm.”

“Can you not force them to give it up?”

“There are some things I cannot do,” he said. “Already there are some unkind ones in my world, and I cannot help it. You must try yourselves to get the fire from the pine trees.”

“The pine trees and cedars are very beautiful,” said Ahmik, the Beaver. “But they are so selfish that I forget all about their beauty. They will not give the fire even to their companions, the other trees. The poor willows and beeches are shivering from the cold, and so are the aspens.”

“They are good, kind trees,” said Manabozho. “The willow puts on her spring clothes early to cheer us with the hope of summer. The beech and aspen are always kind about throwing shade, and coaxing cooling breezes through their branches when we sit under them.”

“The pine trees and cedars have never helped me,” grumbled Ahmik. “I sometimes think they throw pine cones and needles at me on purpose. Do call a council of the animals, Manabozho. Perhaps we can decide on a way to get the fire from them.”

Manabozho called the council, but all that the animals could decide upon was that the pines and cedars should not be allowed to keep the fire to themselves. The next question was, who was to get it away from them. When this question was asked, there was a deep silence in the council.

At last Manabozho, who was presiding, said, “My children, I should like to help you, as I have said, but I am not allowed to tell you what to do.”

Finally the Beaver, Ahmik, said, “I am not sure that I can do anything well except build houses. But if you are all willing, I am ready to try to get the fire.”

For the next few days Ahmik kept as close as he could to the pine trees and cedars. He hoped that they would talk about the fire. But though they often bent their tall heads over to one another and whispered, he could never hear what they said. At last one day he found out that they were going to hold a great council.

First of all, they went bathing in the river. “That is all very well for them,” grumbled the animals, “for they can warm themselves by a fire afterwards.”

Ahmik swam in the water with them. But he could not hear them say anything about fire. When they had bathed, they all went up on the bank.

“Let us build a fire and hold our council around it,” said the king of the pine trees.

“Very well,” said the queen of the cedars. “But first of all, let us post sentinels all about. We do not want the animals to hear what we say in council, or to take any of our fire.”

So large, thick pine trees were chosen as sentinels. They made great hops down to the foot of the bank near the water’s edge. As they went they waved their branches, and wagged their heads proudly. Other sentinels stood on the top of the bank.

They did not see Ahmik. He had crawled into a little hollow overhung by a bush. He was only a few feet away from the trees who were in the council. But they spoke so low that he could not hear their words.

The queen of the cedars was sure that the sentinels could guard them safely. So she ordered a very large fire to be built. The Beaver strained his eyes to see what they made it of, but he could not. However, he soon saw a deep red glow which told him that the fire was ready.

Presently a little coal hopped off the high fire, and began to roll down the bank. The sentinels had their backs to it, because they were all looking at the trees in the council. The other pines and cedars did not see it, for they were tossing their heads in the air and singing.

So the little coal rolled quickly along. Imagine how anxiously Ahmik watched it! He knew that if he only could get it, it would tell him the secret of fire. The little coal, still glowing a bright crimson, rolled very near Ahmik, and then stopped. 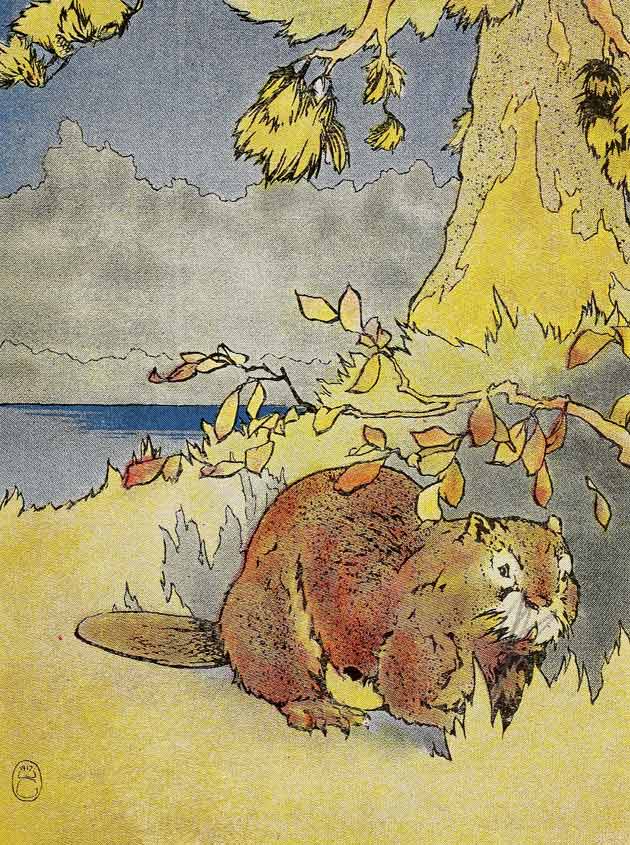 The Beaver saw the deep red glow of the fire.

The Beaver sprang out of his hollow, caught the little coal in his paw, and ran for his life. The trees stood still for a moment. Then they guessed what had happened, and ran after Ahmik.

“Come! Come with us,” they cried to all the other trees they met.

Some of the trees followed them and others did not. Poor Ahmik rushed on breathlessly. The little coal told him that if he could reach some willows and beeches he would be safe. The coal would tell the secret of fire to them. So on he hurried.

He made big leaps, and queer turns. And his tracks were so deep that they made the bed of a river, the Grande Ronde River. If you go to Canada to-day you will still find the river, and you will understand why it winds and twists so much.

On went Ahmik. Some of the trees grew tired, and grouped themselves on the banks of the river he was making. From that spot they watched him. The queen, followed by the other cedars, rushed to the top of a hill to see him better. A few of the big pines ran after her.

Before any tree caught up to Ahmik, he reached the willows and beeches, and gave them the coal. The coal, which was not so bright as it had been, whispered the secret of fire, and then fell into ashes. Ahmik sank down, too tired to talk. The other animals crowded about him, and Manabozho praised him.

Ahmik sank down, too tired to talk.

“You have done bravely, dear Ahmik,” he said. “Now the beech trees and the willows will always give us fire. And see! The selfish pines and the cedars are punished.”

The animals looked. They saw the trees struggling to move. But not one could stir.

“Must they always stay as they are?” asked the animals.

“Always,” said Manabozho. “After this you will usually find the pines in groups, and the cedars will often be on hilltops.”

“But, Manabozho,” said Ahmik, “the other trees are fixed, too. Why should the oaks be unable to move? And the dear willows and beeches, who have been so good to us?”

Manabozho’s face grew sad. “My children,” he said, “the worst part of selfishness is this: other people are punished besides the one who sins.”

“The beeches and the willows are so good,” repeated Ahmik.

“They shall have their reward,” said Manabozho. “It is always a great happiness to those who are good to be able to help others. The good trees shall have this happiness. Whenever any one rubs the wood of the beech and the willow together, he shall make fire. They will always have the secret of fire.”

After that, whenever the animals wanted fire, they rubbed together beech and willow wood. And to this very day, these trees will give fire to the person who is patient enough to work a long time for it. 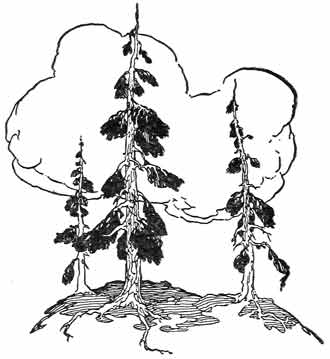