Down in the south, where the sun shines so hotly that everything and everybody sleeps all day, and even the great forests seem silent, except early in the morning and late in the evening—down in this country there once lived a young man and a maiden. The girl had been born in the town, and had scarcely ever left it; but the young man was a native of another country, and had only come to the city near the great river because he could find no work to do where he was.

A few months after his arrival, when the days were cooler, and the people did not sleep so much as usual, a great feast was held a little way out of the town, and to this feast everyone flocked from thirty miles and more. Some walked and some rode, some came in beautiful golden coaches; but all had on splendid dresses of red or blue, while wreaths of flowers rested on their hair.

It was the first time that the youth had been present on such an occasion, and he stood silently aside watching the graceful dances and the pretty games played by the young people. And as he watched, he noticed one girl, dressed in white with scarlet pomegranates in her hair, who seemed to him lovelier than all the rest.

When the feast was over, and the young man returned home, his manner was so strange that it drew the attention of all his friends.

Through his work next day the youth continued to see the girl’s face, throwing the ball to her companions, or threading her way between them as she danced. At night sleep fled from him, and after tossing for hours on his bed, he would get up and plunge into a deep pool that lay a little way in the forest.

This state of things went on for some weeks, then at last chance favoured him. One evening, as he was passing near the house where she lived, he saw her standing with her back to the wall, trying to beat off with her fan the attacks of a savage dog that was leaping at her throat. Alonzo, for such was his name, sprang forward, and with one blow of his fist stretched the creature dead upon the road. He then helped the frightened and half-fainting girl into the large cool verandah where her parents were sitting, and from that hour he was a welcome guest in the house, and it was not long before he was the promised husband of Julia.

Every day, when his work was done, he used to go up to the house, half hidden among flowering plants and brilliant creepers, where humming-birds darted from bush to bush, and parrots of all colours, red and green and grey, shrieked in chorus. There he would find the maiden waiting for him, and they would spend an hour or two under the stars, which looked so large and bright that you felt as if you could almost touch them.

“What did you do last night after you went home?” suddenly asked the girl one evening.

“Just the same as I always do,” answered he. “It was too hot to sleep, so it was no use going to bed, and I walked straight off to the forest and bathed in one of those deep dark pools at the edge of the river. I have been there constantly for several months, but last night a strange thing happened. I was taking my last plunge, when I heard—sometimes from one side, and sometimes from another—the sound of a voice singing more sweetly than any nightingale, though I could not catch any words. I left the pool, and, dressing myself as fast as I could, I searched every bush and tree round the water, as I fancied that perhaps it was my friend who was playing a trick on me, but there was not a creature to be seen; and when I reached home I found my friend fast asleep.”

As Julia listened her face grew deadly white, and her whole body shivered as if with cold. From her childhood she had heard stories of the terrible beings that lived in the forests and were hidden under the banks of the rivers, and could only be kept off by powerful charms. Could the voice which had bewitched Alonzo have come from one of these? Perhaps, who knows, it might be the voice of the dreaded Yara herself, who sought young men on the eve of their marriage as her prey.

For a moment the girl sat choked with fear, as these thoughts rushed through her; then she said: “Alonzo, will you promise me something?”

“It is something that has to do with our future happiness.”

“I want you to promise,” she answered, lowering her voice to a whisper, “never to bathe in those pools again.”

“But why not, queen of my soul; have I not gone there always, and nothing has harmed me, flower of my heart?”

“No; but perhaps something will. If you will not promise I shall go mad with fright. Promise me.”

“Why, what is the matter? You look so pale! Tell me why you are so frightened?”

“Did you not hear the song?” she asked, trembling.

“Suppose I did, how could that hurt me? It was the loveliest song I ever heard!”

“I don’t understand. Well—after that?”

Alonzo stared at her. Had she really gone mad?

Such talk was very unlike Julia; but before he could collect his senses the girl spoke again:

“That is the reason why I implore you never to go there again; at any rate till after we are married.”

“And what difference will our marriage make?”

“Oh, there will be no danger then; you can go to bathe as often as you like!”

“But tell me why you are so afraid?”

“Because the voice you heard—I know you will laugh, but it is quite true—it was the voice of the Yara.”

At these words Alonzo burst into a shout of laughter; but it sounded so harsh and loud that Julia shrank away shuddering. It seemed as if he could not stop himself, and the more he laughed the paler the poor girl became, murmuring to herself as she watched him:

Faint as was her whisper, it reached the ears of Alonzo, who, though he still could not speak for laughing, shook his head.

“You may not know it, but it is true. Nobody who has not seen the Yara laughs like that.” And Julia flung herself on the ground weeping bitterly.

At this sight Alonzo became suddenly grave, and kneeling by her side, gently raised her up.

“Do not cry so, my angel,” he said, “I will promise anything you please. Only let me see you smile again.”

With a great effort Julia checked her sobs, and rose to her feet.

“Thank you,” she answered. “My heart grows lighter as you say that! I know you will try to keep your word and to stay away from the forest. But—the power of the Yara is very strong, and the sound of her voice is apt to make men forget everything else in the world. Oh, I have seen it, and more than one betrothed maiden lives alone, broken-hearted. If ever you should return to the pool where you first heard the voice, promise me that you will at least take this with you.’ And opening a curiously carved box, she took out a sea-shell shot with many colours, and sang a song softly into it. “The moment you hear the Yara’s voice,” said she, “put this to your ear, and you will hear my song instead. Perhaps—I do not know for certain—but perhaps, I may be stronger than the Yara.” 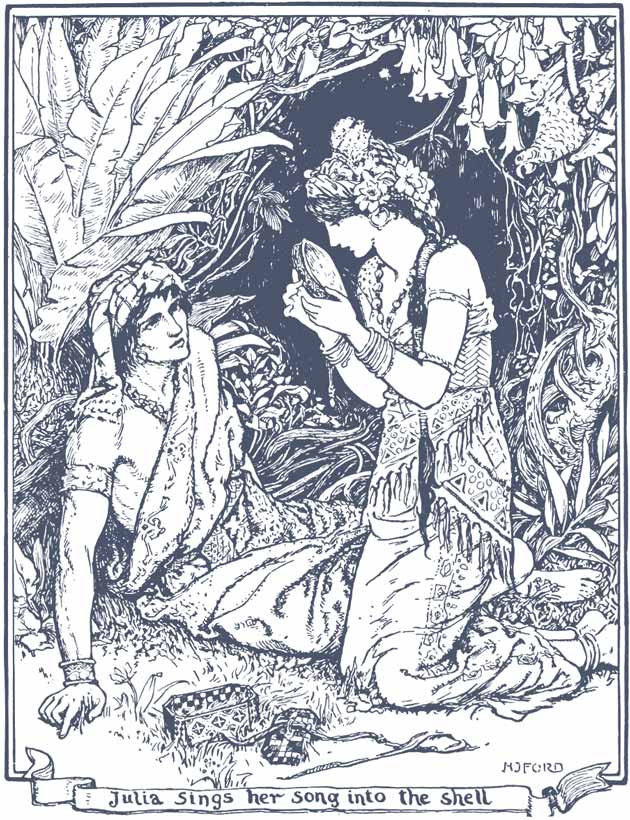 It was late that night when Alonzo returned home. The moon was shining on the distant river, which looked cool and inviting, and the trees of the forest seemed to stretch out their arms and beckon him near. But the young man steadily turned his face in the other direction, and went home to bed.