The struggle had been hard, but Alonzo had his reward next day in the joy and relief with which Julia greeted him. He assured her that having overcome the temptation once the danger was now over; but she, knowing better than he did the magic of the Yara’s face and voice, did not fail to make him repeat his promise when he went away.

For three nights Alonzo kept his word, not because he believed in the Yara, for he thought that the tales about her were all nonsense, but because he could not bear the tears with which he knew that Julia would greet him, if he confessed that he had returned to the forest. But, in spite of this, the song rang in his ears, and daily grew louder.

On the fourth night the attraction of the forest grew so strong that neither the thought of Julia nor the promises he had made her could hold him back. At eleven o’clock he plunged into the cool darkness of the trees, and took the path that led straight to the river. Yet, for the first time, he found that Julia’s warnings, though he had laughed at her at the moment, had remained in his memory, and he glanced at the bushes with a certain sense of fear which was quite new to him.

When he reached the river he paused and looked round for a moment to make sure that the strange feeling of some one watching him was fancy, and he was really alone. But the moon shone brightly on every tree, and nothing was to be seen but his own shadow; nothing was to be heard but the sound of the rippling stream.

He threw off his clothes, and was just about to dive in headlong, when something—he did not know what—suddenly caused him to look round. At the same instant the moon passed from behind a cloud, and its rays fell on a beautiful golden-haired woman standing half hidden by the ferns.

With one bound he caught up his mantle, and rushed headlong down the path he had come, fearing at each step to feel a hand laid on his shoulder. It was not till he had left the last trees behind him, and was standing in the open plain, that he dared to look round, and then he thought a figure in white was still standing there waving her arms to and fro. This was enough; he ran along the road harder than ever, and never paused till he was safe in his own room.

With the earliest rays of dawn he went back to the forest to see whether he could find any traces of the Yara, but though he searched every clump of bushes, and looked up every tree, everything was empty, and the only voices he heard were those of parrots, which are so ugly that they only drive people away.

“I think I must be mad,” he said to himself, “and have dreamt all that folly;” and going back to the city he began his daily work. But either that was harder than usual, or he must be ill, for he could not fix his mind upon it, and everybody he came across during the day inquired if anything had happened to give him that white, frightened look.

“I must be feverish,” he said to himself; “after all, it is rather dangerous to take a cold bath when one is feeling so hot.” Yet he knew, while he said it, that he was counting the hours for night to come, that he might return to the forest.

In the evening he went as usual to the creeper-covered house. But he had better have stayed away, as his face was so pale and his manner so strange, that the poor girl saw that something terrible had occurred. Alonzo, however, refused to answer any of her questions, and all she could get was a promise to hear everything next day.

On pretence of a violent headache, he left Julia much earlier than usual and hurried quickly home. Taking down a pistol, he loaded it and put it in his belt, and a little before midnight he stole out on the tips of his toes, so as to disturb nobody. Once outside he hastened down the road which led to the forest.

He did not stop till he had reached the river pool, when, holding the pistol in his hand, he looked about him. At every little noise—the falling of a leaf, the rustle of an animal in the bushes, the cry of a night-bird—he sprang up and cocked his pistol in the direction of the sound. But though the moon still shone he saw nothing, and by and by a kind of dreamy state seemed to steal over him as he leant against a tree.

How long he remained in this condition he could not have told, but suddenly he awoke with a start, on hearing his name uttered softly.

“Who is that?” he cried, standing upright instantly; but only an echo answered him. Then his eyes grew fascinated with the dark waters of the pool close to his feet, and he looked at it as if he could never look away.

He gazed steadily into the depths for some minutes, when he became aware that down in the darkness was a bright spark, which got rapidly bigger and brighter. Again that feeling of awful fear took possession of him, and he tried to turn his eyes from the pool. But it was no use; something stronger than himself compelled him to keep them there.

At last the waters parted softly, and floating on the surface he saw the beautiful woman whom he had fled from only a few nights before. He turned to run, but his feet were glued to the spot.

She smiled at him and held out her arms, but as she did so there came over him the remembrance of Julia, as he had seen her a few hours earlier, and her warnings and fears for the very danger in which he now found himself.

Meanwhile the figure was always drawing nearer, nearer; but, with a violent effort, Alonzo shook off his stupor, and taking aim at her shoulder he pulled the trigger. The report awoke the sleeping echoes, and was repeated all through the forest, but the figure smiled still, and went on advancing. Again Alonzo fired, and a second time the bullet whistled through the air, and the figure advanced nearer. A moment more, and she would be at his side.

Then, his pistol being empty, he grasped the barrel with both hands, and stood ready to use it as a club should the Yara approach any closer. But now it seemed her turn to feel afraid, for she paused for an instant while he pressed forward, still holding the pistol above his head, prepared to strike.

In his excitement he had forgotten the river, and it was not till the cold water touched his feet that he stood still by instinct. The Yara saw that he was wavering, and suffering herself to sway gently backwards and forwards on the surface of the river, she began to sing. The song floated through the trees, now far and now near; no one could tell whence it came, the whole air seemed full of it. Alonzo felt his senses going and his will failing. His arms dropped heavily to his side, but in falling struck against the sea-shell, which, as he had promised Julia, he had always carried in his coat.

His dimmed mind was just clear enough to remember what she had said, and with trembling fingers that were almost powerless to grasp, he drew it out. As he did so the song grew sweeter and more tender than before, but he shut his ears to it and bent his head over the shell. Out of its depths arose the voice of Julia singing to him as she had sung when she gave him the shell, and though the notes sounded faint at first, they swelled louder and louder till the mist which had gathered about him was blown away. 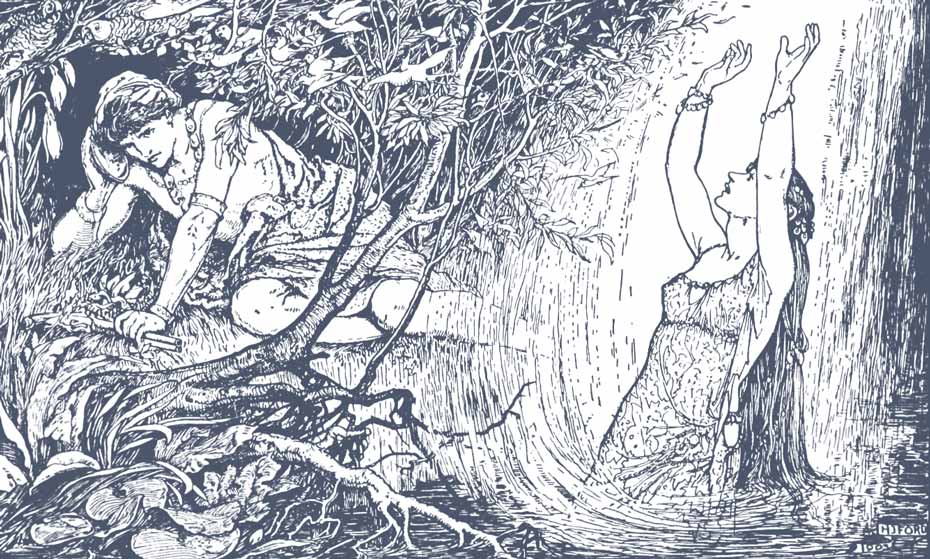 Then he raised his head, feeling that he had been through strange places, where he could never wander anymore; and he held himself erect and strong, and looked about him. Nothing was to be seen but the shining of the river, and the dark shadows of the trees; nothing was to be heard but the hum of the insects, as they darted through the night.

The City of Fortune

They took out what remained of Rupert's heart and put a pretty one inside of him, made of steel, but hard as a diamond. Only one little fibre escaped their search, which passed unnoticed behind the metal heart.

Travellers came to the City of the Emperor and admired it, and the Palace and the Garden, but when they heard the song of the Nightingale, they said: ‘That is the best of all!’